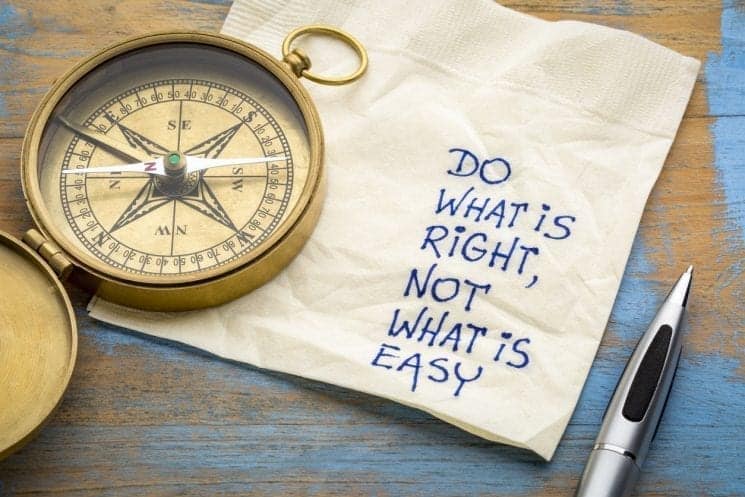 I’m five, watch bigger boys play ball in the schoolyard across the street from Dad’s garage. End of left field is a waist-high-barbwire fence. The other side is my Grandma’s vineyard, vegetable garden, and farmyard; pecking chickens, a couple of goats, and a four-hundred-pound white pig. Little did I know that this would be the future nesting grounds of a moral dilemma.

Big Buster Benninini is at bat. Like Babe Ruth, he points to the sky in the direction of Grandma’s yard. He blasts first pitch over the left field fence, fractures a precious grapevine brought from the old country, demolishes a plant laden with a harvest of sun-ripened tomatoes, rolls to a stop in the middle of scrambling, cackling chickens. Alarmed goats butt heads. The pig snorts, shuffles over, sniffs the ball, decides nothing to eat, wanders off.

Not Grandma; tall, majestic figure, fierce brown eyes; bends, picks up the ball, clamps it in her sun-browned, veined hand; raises up like an avenging angel, angrily waves the ball in a series of Italian salutes; lets loose a load of words that my dad says I can only use if I seek a soapy mouth.

Benninini you miserable stronso/a, bastardo. You destroy my thousand-year-old vine you ignorant figlio di puttana. You crush my tomatoes, scare my chickens you piece of merda. Now you want your ball back? Leccaculo! Mangia merde e morte! A fanabla! Vaffanculo!

The next day, Dad is in front of the gas pump talking to Mister Parker, the school principal. I know it is serious man-talk because they stand close, are grim-faced, whisper, and end with a handshake. Just before the shake, I hear Dad say, “OK, I’ll talk to Joey about it.”

I rush into the garage bathroom to safely succumb to a frightened push to pee. I’m in a panic for the rest of the day.

During supper, I take furtive looks at Dad. All seems OK. No stern stares, no loosening of the belt. In fact, he throws a rare compliment my way; addresses me as Joe.

Supper ends, other kids go to their room to do their homework, Mom clears the table, retreats to the kitchen to wash the supper dishes. As I start to leave, Dad says,

“Joe, stay. Please sit. Mr. Parker has a problem you can help solve. There is this thing called the Depression; it means no one has enough money, some can hardly buy food. Mr. Parker has no money left to buy baseballs for the school kids.”

Dad’s serious tone and treatment of me like a man overwhelms me. My chest swells, my back stiffens, my eyes match Dad’s serious look, my voice squeaks a little in its attempt to duplicate his somber tone.

Dad continues, “My mom, your grandma, bless her independent spirit, refuses to return baseballs hit into her garden. She curses the kids who hit them there, picks each one up and hides it in her cellar. Yesterday she picked up the school’s last baseball. The school must get some of those baseballs back. Do you understand what I am saying?”

Dad explains stuff well. I understand. I feel that urge to pee again.

Every time I visit Grandma, I play with baseballs. I take them out of a huge wine keg filled with balls she has accumulated over the years. She witnesses the fun I have and with a soft look says I can keep some balls and play with them at home.

The soft look vanishes as she lays out her condition. Her eyes turn as hard as an eagle staring at its prey. “You must never give any of these balls to those schoolyard ruffians who smash them into my garden.”

Dad breaks into my scary recollections, “Joey, are you listening? Do you understand what I am saying?” I utter a barely audible “Yes, sir.”

Several days later, I return with six of the best-conditioned baseballs from Grandma’s cellar keg. Dad is pleased. Mr. Parker is ecstatic. I feel like Judas. Grandma continues her battle with the schoolyard ruffians until her demise a year later. On her deathbed, she reaches out, surrounds my neck, gently pulls me to her face, whispers in my ear.

“I know about the baseballs. I forgive you. As for your Dad, Che palle! Incazzato! If I had the strength, I’d paddle his behind.” Suddenly her fierce eyes and tone soften as she adds, “Accidenti! I forgive him too.” She slips away with a satisfied smile.

I never mention Grandma’s whisper to Dad or question why he put me in such a pickle until my sophomore year in college. A philosophy course opens my eyes to why I agonized so long over Grandma’s baseballs. Dad didn’t just put me in a pickle; he tossed me for a desperate swim in a jar of them. I now know the jar’s label: Moral Dilemma.

An owl-eyed philosopher with a fancy name, Immanuel Kant, says in a hundred torturous pages never lie. Grandma’s eagle eyes, Italian salutes, and my never-forgotten Judas shame roar through my brain, body, and being like red-hot lava.

Another balding-head philosopher with an equally fancy name, Jeremy Bentham, says in plainer English that Kant misses the target; it’s not the lie but its consequence that matters. Sounds like my Dad arguing for the well-being of the schoolyard kids. My sense of honor reappears and, as suddenly, disappears like a frightened rabbit.

What about Grandma’s consequences; destroyed vine, ruined tomatoes, chickens scared out of laying eggs. I ponder with my newly acquired philosophical skills; solve the moral dilemma. The school should have paid Grandma for the damage done to her garden in exchange for her return of the baseballs.

We sit at the same supper table, revisit the baseball incident, this time man-to-man over a couple of beers. I launch into a technical Kant-versus-Bentham discussion, present my resolution of the moral dilemma as compensation for Grandma; note a bemused look in Dad’s eye.

Suddenly my confidence plummets like a rocket out of fuel as I recollect how my old man, despite his limited grade school education is a fountain of facts, a well of wisdom.

“Fifteen years ago, you solved the moral dilemma with a hard choice. I predict you’ll continue to make the hard choices assuming you don’t get too tangled up in your brand new intellectual underwear.”