About Us: How Suddenly Senior Started

The weekly column said to reveal the “real truth of growing up and older in a society that has difficulty acknowledging and respecting older folks.”

CLEARWATER – What do you do if, after a lifetime of engaging work and adventure, you arrive at retirement age with no savings, no pension, no support for you, and your wife except a measly $629 monthly Social Security check?

That was exactly the dilemma Frank Kaiser faced three years ago in 1999. And at his age, the only jobs available were bagging groceries and boosting burgers.

Not that he didn’t have solid work experience. After the Army, Kaiser had been a magazine editor, an adjunct professor of advertising, a travel writer, a successful photographer, even a PR flack.

Kaiser even helped save the world. A little corner of it, anyway. 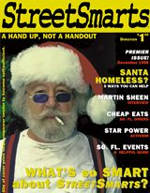 Six years ago in Miami, he and his wife, Carolyn, started StreetSmarts Coalition to help South Florida’s homeless men and women to self-sufficiency. The nonprofit combined publishing an advocacy magazine called StreetSmarts with job and life training to provide meaningful employment with immediate income.

“A hand up, rather than a handout,” selling the magazine created money and dignity for the poorest of the poor. It helped dozens of South Florida homeless men, women, and children off the streets and into places of their own. 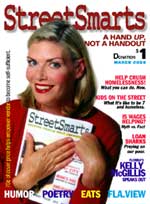 In fact, that “business solution to a challenging social problem” was the Kaisers’ downfall. For three years, he and his wife put all their time and savings into the project, believing that once Miami’s power elite saw the project’s positive results, grant money would roll in.

It never did. Even recognition from Florida’s Homeless Coalition with their highest award for “Outstanding Service to Homeless People in 1999” was met with indifference from local grantors.

By 2000, their savings gone, the Kaisers were forced to close the nonprofit. Broke, on the verge of losing their home, Kaiser needed an income-producing idea. Fast.

“In school, I was taught to write what I know,” he says. “I decided to write the truth about what it’s like to be a geezer.” Besides, he says, it was the one thing he could do where he didn’t have to lie about his age.

“Newspapers’ most avid readers are seniors,” explains Kaiser. “In return for that dedication, most papers give us stock and scam tips, Social Security, and health advice. Important, maybe. But dull.”

Suddenly Senior would be the antidote to all that.

Sex, Now and Then

Kaiser’s first column, “Have Sex the Way You Did 40 Years Ago,” caught the attention of the editor at Florida’s Key Largo Independent. Soon, other papers joined in syndicating the column. Always funny, often inspirational, Kaiser was capturing editors’ and readers’ attention by writing about “senior moments,” the downside of longevity, (occasional) sex after 60, even making light of elders’ ubiquitous nose and ear hairs.

He took readers back to when the world wore hats and examined the disappearance of front porches across America. A column on radio’s Lone Ranger prompted dozens to write him expressing their deep feelings about that imaginative medium.

Clearly, Kaiser had touched a nerve.

A small mailing to senior publications grabbed more papers and magazines to syndicate the column.

One of them was Vancouver Washington’s Senior Messenger. Editor Diane Wagner said later, “We had looked for years for a column like Suddenly Senior. We wanted a literate, witty, sometimes biting, sometimes ironic male writer with an exterior of rumpled steel and the heart of a streetwise pussycat! We found him in Suddenly Senior’s Frank Kaiser.”

Fan mail began arriving. A retired Chicagoan wrote, “You’re a voice in the wilderness, the only one speaking for seniors and the way it truly is with us.”

Another, a New York City boomer just hitting 55, wrote, “Thanks for preparing me to be a duffer, and letting all us Boomers know that dufferdom can be the best years of our lives.”

And a 76-year-old Los Angeles granny wrote, “Your insight, tempered with wit, empowers all of us with truth and hope about aging found nowhere else. Please, keep up the good words.”

Kaiser realized he was not just writing a weekly column anymore. He was feeding hunger in the senior ranks for someone to echo their deepest feelings, hopes, and fears – somebody reporting from the front lines the profound experience of becoming a geezer. And enjoying it.

The writer took to the Internet to further spread his word. Soon, his site was getting 500,000 hits monthly. [By 2008 the site was receiving millions of hits.] To provide alternative views of seniordom, Kaiser served up his site visitors with an eclectic stew of cartoons, humorous photos, and funny stories, many by well-known authors. “If it’s a fresh, funny look at seniordom, it’s now at SuddenlySenior.com,” he exclaims.

Most popular at the site are the ever-changing “Best Senior Sites” and “This Week’s Guaranteed Best Jokes.” According to Kaiser, SuddenlySenior.com has the world’s largest selection of senior jokes as well.

Touches Hearts and Funny Bones of One Million

As the weekly column began syndicating to other senior Internet sites, website reviewer Briefme.com said, “Check out Frank Kaiser’s Suddenly Senior to get the real truth of growing up and older in a society that has difficulty acknowledging and respecting older folks. Real stories through real-life experiences touch your heart and your funny bone!”

With some 56 syndicating newspapers and magazines from coast to coast, including the prestigious St. Petersburg Times, syndicating senior Websites and readers at the www.SuddenlySenior.com, readership is estimated at 1.9-million. [By 2008, there were 83 syndicating publications with a readership of 3.1-million.]

The column and the heavily advertised site, now have lives of their own. It became Kaiser’s major source of income. “No one is more surprised than I,” he says.

Dishing out humor and hope to the 79 million Americans age 50 and up who’ve “become senior before their time” has proved to be Kaiser’s most extraordinary adventure yet.

Every day, incoming e-mail demonstrates that he has struck a resonant chord with seniors of all ages around the world. [One hundred seventy-six foreign countries logged into SuddenlySenior.com in April 2008.]

As a Key Largo reader wrote Kaiser recently, “Suddenly Senior really tells it like it is. My wife, June, and I can’t wait each week to see how closely you capture our lives and hopes. You’re really a funny guy!”

Readers can see for themselves.