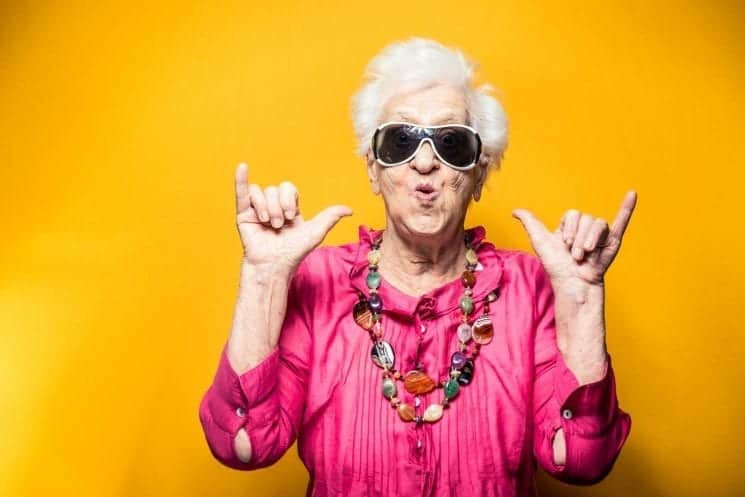 Enjoy our best jokes for seniors this week. Please contact us if you have senior jokes you want to share for us to post. Be sure to check out our Best New Jokes Compilation: Mostly Old Jokes

His teacher says: “Johnny, do not walk into class late again.”

The next day Johnny crawls into class late once again.

His teacher says, “Johnny, I thought I told you not to come into class late.”

Johnny responds, “No, you told me I couldn’t walk in class late.”

One year, I decided to buy my mother-in-law a cemetery plot as a Christmas gift…

The next year, I didn’t buy her a gift.

When she asked me why I replied,

“Well, you still haven’t used the gift I bought you last year!”

The teacher gave her 5th-grade class an assignment: Get their parents to tell them a story w/a moral at the end of it. The next day, the kids came back &, one by one began to tell their stories.

There were all the regular types of stuff: Spilled milk & pennies saved. But then the teacher realized, much to her dismay, that only Janie was left.

“Yes, ma’am. My daddy told me a story about my Mommy. She was a Marine pilot in Desert Storm, & her plane got hit. She had to bail out over enemy territory, & all she had was a flask of whiskey, a pistol, & a survival knife.

She drank the whiskey on the way down so the bottle wouldn’t break, & then she parachuted right into the middle of 20 Iraqi troops. She shot 15 of them w/the pistol, until she ran out of bullets, killed 4 more w/the knife, till the blade broke, & then she killed the last Iraqi w/her bare hands.”

“Good Heavens,” said the horrified teacher. “What did your Daddy tell you was the moral to this horrible story?”

My wife and I were watching Who Wants To Be A Millionaire while we were in bed.

I turned to her and said, ‘Do you want to have sex?’

I then said,’Is that your final answer?’

She didn’t even look at me this time, simply saying, ‘Yes..’

THE BLACK BRA (as told by a woman)

I had lunch with 2 of my unmarried friends.

One is engaged, one is a mistress, and I, the third one, have been married for 20+ years.

We were chatting about our relationships and decided to amaze our men by greeting them at the door wearing a black bra, stiletto heels and a mask over our eyes. We agreed to meet in a few days to exchange notes.

Here’s how it all went.

The other night when my boyfriend came over he found me with a black leather bodice, tall stilettos, and a mask. He saw me and said, ‘You are the woman of my dreams…I love you.’ Then we made passionate love all night long.

Me too! The other night I met my lover at his office and I was wearing a raincoat, under it only the black bra, heels and mask over my eyes. When I opened the raincoat he didn’t say a word, but he started to tremble and we had wild sex all night.

Then I had to share my story:
When my husband came home I was wearing the black bra, black stockings, stilettos and a mask over my eyes. When he came in the door and saw me he said,

(you are going to love this..)

I took my wife to a restaurant.

The waiter, for some reason, took my order first.

He said, “Aren’t you worried about mad cow?”

“Nah, she can order for herself.”

A big-game hunter went on safari with his wife and mother-in-law.

The hunter picked up his rifle, took a swig of whiskey, and started to look for her. In a clearing not far from the camp, they came upon a chilling sight: the mother-in-law was backed up against a thick, impenetrable bush, and a large male lion stood facing her.

The wife cried, “What are we going to do?”

“Nothing,” said the hunter husband. “The lion got himself into this mess, let him get himself out of it.”

My wife and I were sitting at a table at her high school reunion and she kept staring at a drunken man swigging his drink as he sat alone at a nearby table.

“He’s my old boyfriend. I understand he took to drinking right after we split up those many years ago, and I hear he hasn’t been sober since.”

“My God!” I said, “Who would think a person could go on celebrating that long?”

An elderly woman went into the doctor’s office. When the doctor asked why she was there, she replied, “I’d like to have some birth control pills.”

Taken aback, the doctor thought for a minute and then said, “Excuse me, Mrs. Smith, but you’re 75 years old. What possible use could you have for birth control pills?”

The woman responded, “They help me sleep better.”

The doctor thought some more and continued, “How in the world do birth control pills help you to sleep?”

The woman said, “I put them in my granddaughter’s orange juice and I sleep better at night.”

My wife sat down next to me as I was flipping channels.

The doctor and his wife were having a heated argument at breakfast. As he stormed out of the house, the man angrily yelled to his wife, “You aren’t that good in bed either!”

By midmorning, he decided he’d better make amends and phoned home. After many rings, his wife, clearly out of breath, answered the phone. “What took you so long to answer and why are you panting?”

“What in the world are you doing in bed at this hour?”

“Getting a second opinion.”

Saturday morning I got up early, quietly dressed, made my lunch, and slipped quietly into the garage. I hooked up the boat up to the van and proceeded to back out into a torrential
downpour. The wind was blowing 50mph, so I pulled back into the garage, turned on the radio, and discovered that the weather would be bad all day.

I went back into the house, quietly undressed, and slipped back into bed. I cuddled up to my wife’s back; now with a different anticipation, and whispered, “The weather out there is terrible.”

My loving wife of 5 years replied, “And, can you believe my stupid husband is out fishing in that?”

A TRIFECTA OF OUR FAVORITE LAWYER JOKES

A doctor vacationing on the Riviera met an old lawyer friend and asked him what he was doing there.

The lawyer replied, “Remember that lousy real estate I bought? Well, it caught fire, so here I am with the fire insurance proceeds.

What are you doing here?” The doctor replied,

“Remember that lousy real estate I had in Mississippi? Well, the river overflowed, and here I am with the flood insurance proceeds.”

The lawyer looked puzzled. “Gee,” he asked, “how did you start the flood?”

My wife was hinting about what she wanted for our upcoming anniversary.

I bought her a bathroom scale.

A lawyer is standing in a long line at the box office.

Suddenly, he feels a pair of hands kneading his shoulders, back, and neck. The lawyer turns around.

“What the hell do you think you’re doing?”

“I’m a chiropractor, and I’m just keeping in practice while I’m waiting in line.”

The woman behind the counter asked me for my driver’s license to
verify my age.

I looked in my pockets and realized I had left my wallet at home. I told the woman that I was very sorry, but I would have to go home and come back later.

The woman said, ‘Unbutton your shirt’.

So I opened my shirt revealing my curly silver hair.

She said, ‘That silver hair on your chest is proof enough for me’ and she processed my Social Security application.

When I got home, I excitedly told my wife about my experience at the Social Security office. She said, ‘You should have dropped your pants. You might have gotten disability too.’

A truck driver would amuse himself by running over lawyers. Whenever he saw a lawyer walking down the side of the road he would swerve to hit him, enjoy the load, satisfying “THUMP”, and then swerve back onto the road.

(at this point some of you are probably wondering how the trucker could distinguish the lawyers from the humans. Obviously he saw the trail of slime they left!)

One day, as the truck driver was driving along he saw a priest hitchhiking. He thought he would do a good turn and pulled the truck over.

He asked the priest, “Where are you going, Father?”

“I’m going to the church 5 miles down the road,” replied the priest.

“No problem, Father! I’ll give you a lift. Climb in the truck.” The happy priest climbed into the passenger seat and the truck driver continued down the road.

Suddenly the truck driver saw a lawyer walking down the road and instinctively he swerved to hit him. But then he remembered there was a priest in the truck with him, so at the last minute he swerved back away, narrowly missing the lawyer. However, even though he was certain he missed the lawyer, he still heard a loud “THUD”. Not understanding where the noise came from he glanced in his mirrors and when he didn’t see anything, he turned to the priest and said, “I’m sorry Father. I almost hit that lawyer.”

“That’s okay”, replied the priest. “I got him with the door!”

My wife was standing nude, looking in the bedroom mirror.

She was not happy with what she saw and said to me,

“I feel horrible; look old, fat and ugly. I really need you to pay me a compliment.”

I replied, “Your eyesight’s darn near perfect.”