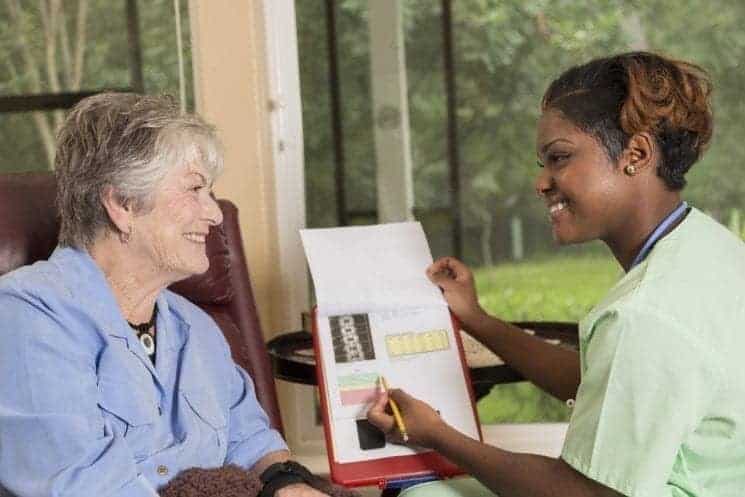 According to the U.S. Census Bureau, adults 50+ represent 76 million people, 28% of the total U.S. population and 37% of the population 18+. Demographic trends associated with the aging of the baby boomer population, plus gains in longevity, will grow the 50+ market to over 106 million by 2015 when they will account for 45% of the adult population. Seniors are, and will become even more, a market, social and political force to be reckoned with and hence a very attractive community to a range of advertisers and marketing sponsors.

Seniors are freed from the constraints of raising a family and have more time of their own. Mature consumers seek products, services, and activities that complement their desire to live life to the fullest. The mature market has over $1.6 trillion in spending power and a net worth that’s almost twice the U.S. average. The facts speak for themselves — the mature market represents a tremendous opportunity across all categories. 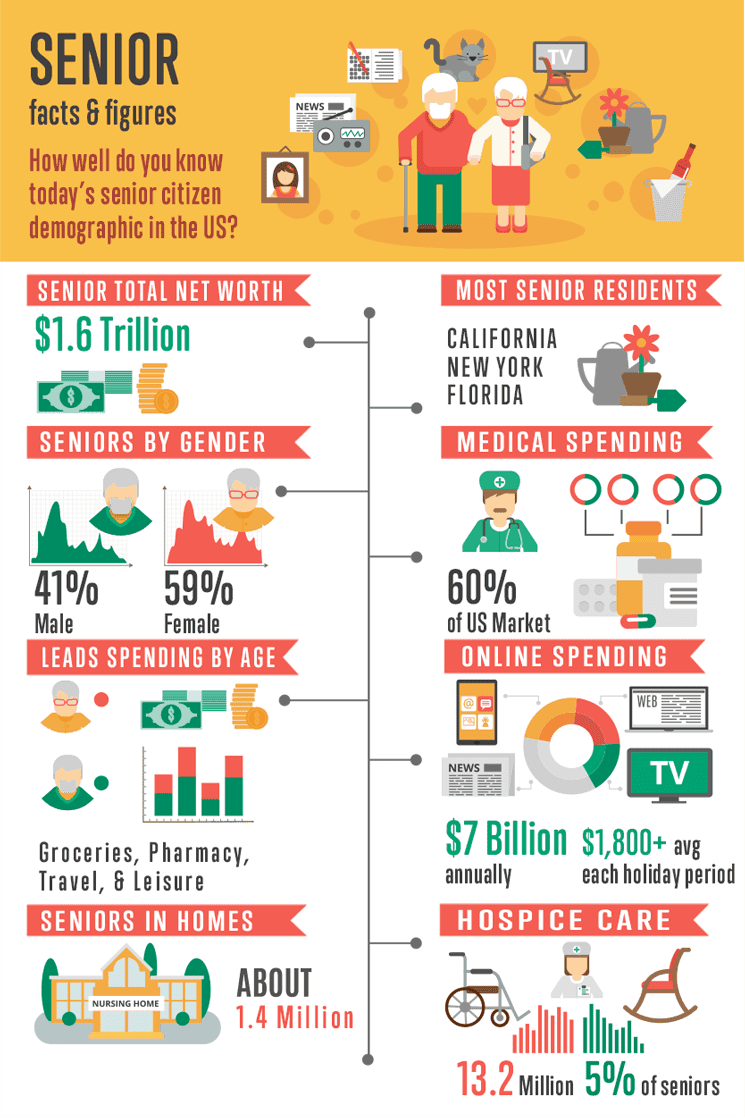 Why? Once a person enters the “retiree” demographic, he/she will be a member for life (rather than teens moving to 20s to 30s, etc.) There are currently more than 76 million seniors and over the next 20 years, more than 70 million baby boomers will join the “senior” rank. This represents an unlimited opportunity to expand your company’s brand.

Senior websites like Suddenly Senior and Retired.com have captured the trust and attention of the wealthiest consumer on the planet. This consumer group has the most disposable income with the greatest buying power; interested in new services to enhance their lifestyle and is currently the largest consumer in more product categories than any other market group. If you have valuable offerings, Suddenly Senior could be a gold mine for your company and your one source to gain the marketing advantage over your competition addressing this valuable consumer group.

Suddenly Senior and Retired.com are servicing the most desired consumer on earth – retirees. Retirees have many exciting attributes that make them extremely valuable to corporations around the world. While earning their trust takes time, their loyalty ensures long-term revenues and profits for decades to come.

Here’s some recent research to more acquaint you with our membership base:

Seniors are logging on in record numbers. In 2000, almost 14 million seniors, or 17% of all Americans aged 55+ were active Internet users. By 2002, the number of seniors online will grow to 22 million, accounting for 36% of all seniors. (According to eMarketer’s recently released eRetail Report) 76% of seniors are online daily, compared to 68% of all online adults.

This population segment dominates healthcare spending. The 50-plus group spends over $525 billion on healthcare, with that number expected to reach $1.1 trillion by the year 2007. They purchase 74% of all prescription drugs and 51% of all over-the-counter drug purchases representing a $100 billion market. Per capita spending is approximately $467, more than double the average.

Seniors are aging well, living longer and healthier lives than any generation before them. Sixteen million seniors exercise at least three times per week. From 1987 to 1995, the number of 55-plus health club members jumped 119%, and the number of 65-plus who joined health clubs rose a staggering 669%. Life expectancy has increased 30 years in the past century, extending the life of our members. We can expect similar results in the coming century. (American Academy of Anti-aging medicine, 2000)

Travel – It’s no surprise that seniors like to travel and do it often. They represent 80% of all luxury travel purchased in the U.S., making up 65% of all cruise passengers and typically spending 74% more on vacations than the 18-49 years old population segment.

Suddenly Senior presently receives 243,000 of these individual visitors each month. Just like any other network, we make a wide variety of seniors oriented information and programs available to our audience.

The population contains an ever-increasing proportion of older adults. Their social interests and lifestyles are ever-broadening. These seniors are pouring on-line to create one of the most important consumer groups yet seen in this supposedly youth-oriented medium.

According to a Greenfield Online consumer research study, an amazing 92 percent of wired seniors have window-shopped online and 78 percent have made a purchase. This is significantly higher than the online shopping and buying by the total Internet population, according to tracking studies by the Westport-based company that pioneered online marketing research.

The survey found that young people are more likely to use the Net for entertainment and socializing, while older folks spend most of their time on more serious matters. For example, 24% of 50-to-64-year-olds and 19% of those 65 and over say they use the Net often for investing purposes.

The over 50 age group represents 26% of the population, control nearly 75% of North America’s personal wealth, spend 28% of all discretionary income, nearly double that of households headed by those who are 34 years old or younger, and represents close to 50% of all consumer spending in North America.

The typical profile of the over 50 Internet user is a 57-year-old grandparent who owns a car, has a higher than average education, and has yearly household income in excess of $60,000.

The fact that this age group purchases more than half of the luxury automobiles sold in North America indicates their immense buying power.

The over-50 age group holds 75% of ALL Personal Wealth

According to Media Metrix, seniors are the fastest-growing Internet demographic group. Seniors go online more frequently and stay on the Internet longer than those under 50, making them among the largest untapped audiences for online marketers. Compared to 18- to 24-year olds, seniors spend on average 6.3 more days per month on the Internet, stay logged on 235.7 minutes longer and view 178.7 more unique pages per month.

The Media Metrix Report shows that this group now comprises 20 percent of total online users outpacing 18-24-year-olds who trail at 17.5 percent. The report also shows that seniors surf the Internet more frequently, stay there longer, and check out more Internet pages than even their college-age counterparts, thereby contradicting the widely held belief that seniors are technology laggards.

An Online Gold Mine – According to a Greenfield Online

An amazing 92 percent of wired seniors have window shopped online and 78 percent have made a purchase. This is significantly higher than the online shopping and buying by the total Internet population, according to tracking studies by the Westport-based company that pioneered online marketing research.

There are currently more than 55 million seniors and over the next 20 years, more than 70 million baby boomers will join the “senior” rank.

Seniors are the wealthiest consumer on the planet

This consumer group has the most disposable income with the greatest buying power; interested in new services to enhance their lifestyle and is currently the largest consumer in more product categories than any other market group.

Also, According to a Greenfield Online consumer research study, an amazing 92 percent of wired seniors have window shopped online and 78 percent have made a purchase. This is significantly higher than the online shopping and buying by the total Internet population.

There are 76 million Americans 50 and older

Twenty-seven percent of those over 65 are online. (eMarketer 2000)

Currently, there are 76 million Americans over fifty or one in every four of us. There are 28 million women in the U.S. between the ages of fifty and seventy-five, and there are 11 million women over fifty who are employed or looking for work, including over one million women who are sixty-five plus!

In terms of economic impact, about half of America’s discretionary income lies in the pockets of those of us fifty and over, a group that is increasing by some six thousand people per day.

Seniors (age 55 and older) currently have the highest projected growth rate amongst all age groups. Formerly known as the group least likely to be online, seniors have increased their online presence to a 38% increase since last year. By the year 2003, it’s estimated there will be 17.3 million seniors online

BUSINESS 2.0 10/24/00 Since last year, there has been a 38 percent increase in growth among seniors. Seniors participate in e-communities, make purchases online, swap photos of family, and keep in touch with friends. Seniors spend more hours per week online than any other age segment, including teens.

Women now account for 37.1 million of all U.S. adult users, representing 49% of the total active online population, according to eMarketer’s eDemographics & Usage Patterns Report. The report also states that by the year 2003, the number of American women online will increase to 78.8 million, accounting for 51%, as men online will grow to 75 million representing only 49% of total active adults. This ratio will mirror that of women in the overall population — outnumbering men both online and offline.

Newly established online services and communities are partly responsible for the rise in internet usage by senior citizens. Seniors (age 55 and older) currently have the highest projected growth rate amongst all age groups. Formerly known as the group least likely to be online, seniors have increased their online presence to a 38% increase since last year. By the year 2003, eMarketer estimates there will be 17.3 seniors online representing 11% of the total online population.

Key Findings of the eDemographics Report:


Net users are scaling down their consumption of other media in lieu of the Internet.

By year-end 2000, only 38 percent of the world’s 197.6 million active internet users will come from the U.S. As the growth of new users in the U.S. is gradually slowing down, the rest of the world is gaining a larger presence, with Western Europe and Asia leading the way.

“Waning net dominance in the U.S. will be reflected in more diverse content and globalized services,” states Claudine Thompson, Senior eMarketer Analyst and author of the eDemograhics report. “Online businesses will undoubtedly benefit from a wider consumer base, but will also be faced with increased competition and delivery concerns.”

The eDemographics Report offers a complete analysis of the American online population, aggregating research data from a variety of sources, including Strategis, Jupiter Communications, CommerceNet, Nielsen, Media Metrix, Intelliquest, Cyber Dialogue, IDC and the US Census Bureau. The report contains 214 pages filled with 343 charts and graphs.