A Tip of the Hat to a Proud American Tradition 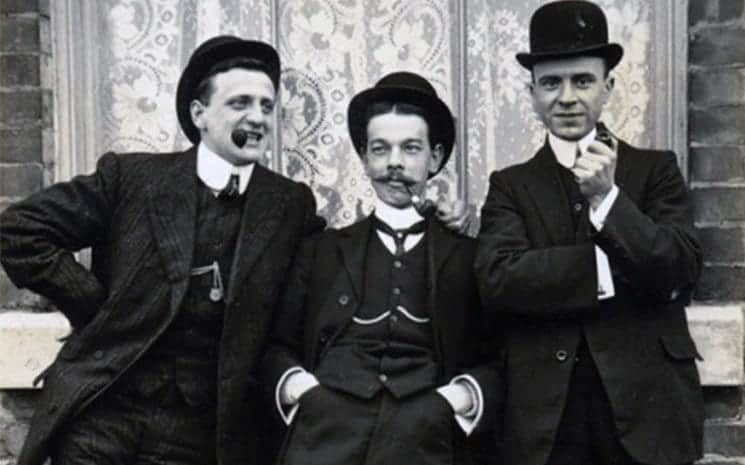 Look at any outdoor photograph of American men taken before 1960 and you’ll see every last man wearing a hat.

Be it a fedora or homburg, slouch or porkpie, Panama or boater, hats used to be as essential as shoes, adding a fine flourish to proper manly appearance.

The hat was so common that it found its way into everyday language: Keep it under your hat; my hat’s off to you; pass the hat; thrown my hat in the ring; if the hat fits, wear it!

Old hat was the expression, “You’re talking through your hat.”

10 Signs You’re a “Dinosaur” in a High-Tech World

After graduating from college in the 1950s, my first stop before finding a job was to a hat shop to buy that period’s fundamental symbol of successful manhood. I chose a combination slouch or porkpie.

It was a silly looking lid that you see today only here and in reruns of grumpy old Jack Lemon and Walter Mattheau wearing loud pants and squeaky shoes.

Honestly, my porkpie made me feel like an adult for the first time in my life. It told the world that I was now a man of substance, someone not to be trifled with. And in a Chicago winter, with wind chill factors of minus 40, it had a practical side as well.

Then, suddenly and without warning, hats were passé.

I wore my new porkpie about as long as I would wear my Nehru suit a decade later. The fashion was first wounded by a revolt against rigid postwar organizational standards, then, some say, single-handedly killed off the day Jack Kennedy’s attended his 1961 presidential inauguration – bareheaded.

By then, I was working at a Chicago advertising agency where one of my first assignments was to help create a campaign for The Hat Council to make their products popular again. But it was as futile as trying to bring back the buggy whip.

I remember wishing the revolt had been against neckties instead.

Suddenly Trivia: What is a hat block? a) an ice hockey play, b) someone sitting in front of you in the theatre wearing a large hat, c) a block or mold on which a hat is shaped and ironed.

By 1966, even confirmed hat guy, Frank Sinatra, ditched his expensive fedora when he wed Mia Farrow. He couldn’t afford to look old fashioned with a 21-year-old lady on his arm.

The traditional hat was dead as the dodo.

According to many, this is precisely when man began his descent down a path of deterioration and ignominy, never again to feel that proud camaraderie with his fellow gent on the street.

Today, the best we have for our heads is the baseball cap, usually advertising some tractor, beer, or bowling team. It’s a child’s hat, which, like shorts, grown men should never be seen in.

How far into sartorial hell must man descend?

My old slouch or porkpie is long gone, by now probably a collector’s item sold on eBay. I wonder what today has taken its place as the symbol of entry into adulthood. Surely, nothing as stylish, as substantial, as striking.

I say bring back the hat. We’ll all be a far better for it.

I’m not just talking through my porkpie here. But keep that under your hat.

Suddenly Trivia Answer: c) a block or mold on which a hat is shaped and ironed.