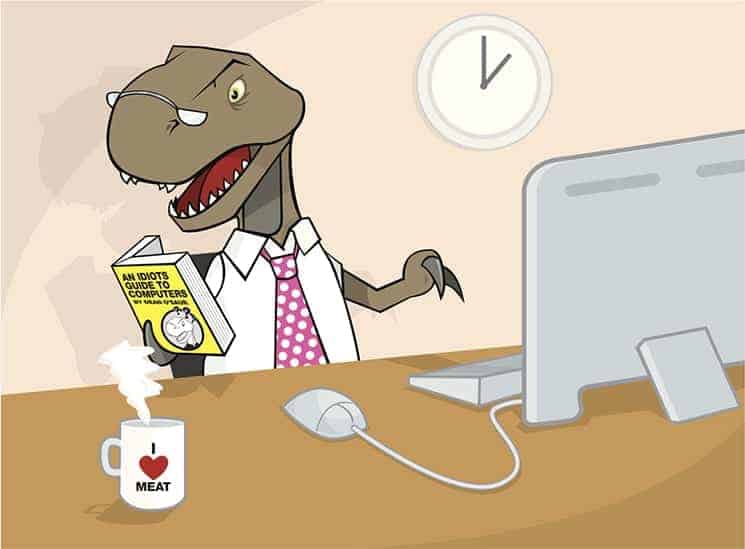 Technology changes quicker than a New York minute. It’s hard enough for the younger generation to keep up with the changes, so you know it’s next to impossible for us geezers.

If you still use CDs and have yet to make a Netflix account, then you’re probably on your way to becoming a technology dinosaur. “From a distant era” might be a phrase used to describe a dinosaur, but you may be one; if these signs fit you to a T!

1. You have no clue what “hashtag” means or how to use it

To you, this symbol # is probably just a pound sign, not a hashtag. You see the word everywhere and ask a friend about it.

After the initial shock and disbelief of your naiveté, the pal explains that a hashtag is a type of label or tag used on social media sites Twitter, Facebook, and Instagram. It’s used to mark something belonging to a specific category.

Searching for that hashtag (a number sign or pound sign precedes it), will find each message pertaining to that theme. Because of the widespread use, the hashtag was added to the Oxford English Dictionary in 2014.

If you have no online social media presence and Twitter, Facebook and Instagram aren’t in your vocabulary; this could be why you’re clueless. Hopefully, now you understand what it means and will be able to identify what it means when someone writes #TechDino on your photos.

If you were to look at a teenager’s text conversation, you would probably have no idea what they are saying. All you would see is a screen filled with tiny icons and acronyms.

Nowadays teenagers tell you emojis are the only way to communicate. Your blank stare reveals the truth, you have no idea what they are talking about.

They patiently explain that emojis are icons or pictographs, such as the smiley face or wink. It’s a way of showing emotion by using letters or symbols to express how you’re feeling in email and text messages.


According to Survey Monkey reports, Gen Z uses emojis 39% of the time they text. Not only that, although emojis might seem silly or cute to you, they are actually considered to be work appropriate.

In an article by Entrepreneur Emojis are the next generation, they’re not just smiley faces, they can be a music symbol, a ring, a flag, etc. Smiley faces, pictographs, really?

3. You remember when computer memory was a whopping 64K and storage was a tape recorder or cartridge

In the days of computer infancy, circa the early 1980s, those features seemed pretty cool. Operating systems were MS-DOS based (yes, this was before Windows) and sometimes quirky.

Remember the Commodore 64, the 8-bit computer introduced in 1982, which became the most popular personal computer of the 1980s? Or my personal favorite, the rare and not supported for long, Timex-Sinclair 2068 color computer? There were cartridge slots for games and utility programs and many used tape recorders for storage.

In those early years, disk drives were not affordable for home users. Still, program developers created over 10,000 software titles for the Commodore 64. Even with limited speed and memory, it was possible to play games, create a spreadsheet, and do word processing before Windows came along.

Perhaps this sounds “lame and “quaint” in today’s world of multi-featured 64-bit computers with tons of memory now commonplace. The 5 ¼ and 3 ½ floppy disk drives have been replaced by flash drives and cloud storage. (Whatever that is?)

4. You own either an electronic typewriter or a classic manual and still use it

Before the computer was introduced, the typewriter was the avenue for printed communication. There were Smith-Corona, Remington, Olivetti, Royal, and Swintec to name just a few.

Sound familiar? There’s still an intangible, difficult-to-describe feeling when you get out the machine and address some envelopes or fill out an application form. One specific memory comes to mind, remember those smudges on your fingers from carbon paper?

5. Your televisions are analog and require a cable box or digital converter

It’s obvious they’ve categorized you in the “blast from the past “ age group. It’s true the 19 and 24 inch small sets pale in size with today’s 40 and 55-inch models. And yes, the old sets are not digital, but with converter technology, you can still watch programs of all kinds.

Oh, you’ve heard of flat-screen TVs, HDTV, surround sound, and other fancy features. But why spend money on new, when what you have works fine?

6. You still watch movies with a VCR

And why not? Many old classics and made-for-TV movies are not available on DVD.

The picture and sound quality may not be top-notch, but maybe we’ve grown accustomed to having only the latest and best and aren’t willing to settle for anything less than the top-of-the-line?

Why throw away perfectly good entertainment just because it’s old or inconvenient to rewind after viewing?

And think of the budget, many VHS movies are cheap – $1-5 at online sites. dollar stores and thrift shops.

If this sounds like you, then you are the epitome of a technology dinosaur. By today’s standards, VHSs are not only old, they are ancient. If you watch movies on anything that is not Amazon Prime, Hulu, or Netflix, you have fallen behind.

These internet-based streaming platforms are definitely convenient, but they have taken the magic out of movie night.

Do remember going to Blockbuster and renting a movie? Those were the days.

7. You use a “dumb phone” instead of a smartphone 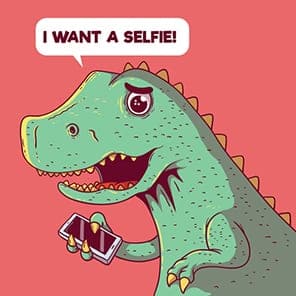 Younger co-workers scoff at your flip phone that does not have WiFi, or internet access and doesn’t support downloadable apps. It does, however, have a calendar and some old, but still decent games, And one nice positive – since it’s a flip phone, no inadvertent and potentially embarrassing “butt dialing.”

It may not have “bells and whistles” but it does make and receive calls; it’s a phone, after all.

8. You keep appointments and notes on a decades-old PDA with no Internet access

True, its operating system is so old (Windows CE/Pocket PC), it’s obsolete. It does have Pocket Word and Excel but transferring files to a modern PC isn’t a viable option. Most computers today no longer support infrared capabilities.

Still, it does have an appointment calendar that can be set to remind you with a beep at certain time intervals. It also offers a contact list where information on business associates or personal info can be entered. It’s simple to use and a bonus – no distractions, except perhaps for a game of solitaire.

9. You take photos with a vintage 35mm film camera

Cameras used to be simple. You would look through the viewfinder, click a button and that was it. Now you can zoom in and out, add filters, use portrait mode, take photos in burst mode and so much more.

When did taking a photo become so complicated? All a picture was supposed to do is capture a moment in time, not allow you to edit it.

Your family and friends chide you for not having a digital camera enabling you to share photos via computer email. It may be challenging to find a place that still develops film, but it is possible.

And it’s so comforting using the favorite old camera that has traveled with you and captured so many memories.

10. You read books by actually turning the printed page

Of course, you’ve heard the words “Nook” and “Kindle Fire”, but you really have no idea what they are or how they work. But when you open the binding of a new book and it cracks, that’s a familiar sound. Perhaps it reminds you of past times spent in the library, a favorite bookstore, or sitting in a cozy chair sipping hot chocolate on a cold, damp day.

Reading used to be a relaxing activity, something to disconnect you from all other electronics. Now, people read on electronics. How are you supposed to relax with your iPad’s screen shining in your face?

You finally figured out how a video call works, but apparently, you still can’t frame yourself correctly. You are not sure whether you’re using FaceTime, Zoom, or Skype, all you know is that you found a way to talk to your kids.

But it seems that no matter what you do, the camera is never perfectly positioned. You put your phone up to your face to see their video, but then they can’t see you.

So you back up a bit so they can see your face but now you can’t see them! It’s all very confusing, but that’s okay. At the end of the day, all you want to do is be able to see your loved ones.

If any of these descriptions remind you of yourself, then you are probably a digital dinosaur. Technology just isn’t your strong suit and honestly, you don’t care! Enjoyment can still be found and accomplishments achieved. They just might be the old-fashioned way!