You folks on the Internet are no doubt aware of a phenomenon called WebCams. Seniorcams help promote a sexy senior citizen dream. Essentially, anyone with a $20 computer camera can broadcast his or her life in boring, inconsequential detail while the rest of us watch.

This Internet movement stems from our increasingly perverse engagement with the dark side of media voyeurism. Witness “Survivor” and all the other manifestations of our creeping Peeping Tomism dating all the way back to the carnal aspects of the Clinton presidency.

We live in an age when if you’re not on camera, you don’t exist. 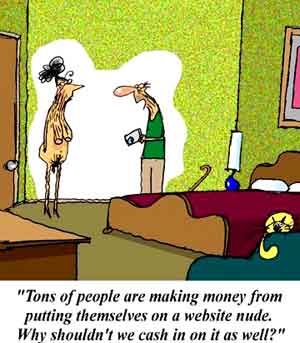 WebCams started with a few young strippers (often having their boyfriends playing close supporting roles) spending their entire lives on camera – available to anyone at any time, day or night, for $10 to $20 a month.

The phenomenon quickly grew from sex cams to ghost cams, weather cams, bungee cams, starlet cams, collie cams, even condo cams that scan other condos’ windows for the chance sight of something lascivious. You or I could have one on us right now and not know it. Personally, I’m not concerned. My wrinkled old carcass would probably set the entire movement back, not to mention break a camera or two.

Young movie stars and other celebs, always the leading edge of popular slime, are cashing in on this fad, charging fans big bucks to watch them romp and rouse. Notorious bad boy Dennis Roman, for example, promotes RodmanCam, “a subscription to which [for $19.95] will get you, among other things, a voyeuristic ‘up-close look into the enigma that is Dennis Rodman.'”

Personally, I can wait on that. All those body piercings might permanently short-circuit my monitor.

But as yet there are no SeniorCams for us sexy senior citizens.

I’m thinking about starting GeezerCam, a 24/7 look at the life of a senior.

Somebody’s gotta do it. And the money would, as they say, help.

Would You Pay $20 for SeniorCams?

Grainy, low-res cameras would follow my every breath-catching movement, from the times I get up in the middle of the night to pee right through my exciting day in front of my computer until my wife and I shake hands at bedtime.

There’d be me taking my morning shower. Viewers could pray for a hasty steam covering the glass shower curtain. Me yelling at TV newsfolk. Me losing my glasses, cleaning my nails, forgetting why I’ve entered a room, eating lunch, napping. Then napping some more.

Even I have to admit that there’s slim entertainment value here. And as pressure would mount to attract more spectators, I’d have to expand, say, to provocative and bizarre nursing-home action. With a floor cam, viewers could watch crutches, slippers, wheelchairs and walkers passing by. Occasionally excitement would peak as an elderly woman fell, yelling, “Help! I’ve fallen and I can’t get up.”

Instant replays would assure senior viewers that they’d catch everything in spite of frequent bathroom visits.

Still, competition’s tough out there on the Internet.

The big questions remains: Would you pay twenty bucks a month to watch GeezerCam? Me neither. Maybe a buck. It might be worth that for laughs. While viewers at other cam sites e-mail pretty young things to take it all off, at GeezerCam they’d be screaming, “Put it back on! Put it back on!”

But really, what’s the worst that could happen? Attracting a following of rich and aggressive 90-year-old widows? Forcing Congress to pass laws protecting innocent Web crawlers from death by boredom? Watching fickle fans dump me in favor of LassieCam?

Still, after due consideration, I must leave GeezerCam to someone else. Nothing personal, but as a self-designated Dirty Old Man, I’d rather watch young girls take off their clothes than strip myself.

For me, voyeurism is strictly a spectator sport.