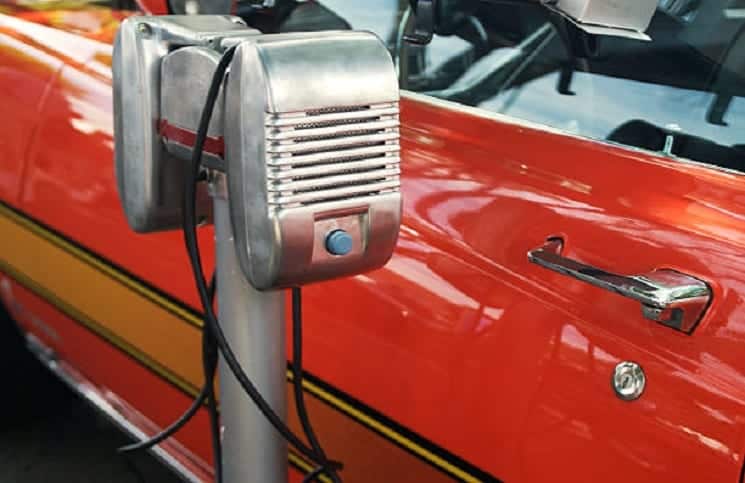 Here’s how I remember it…

I’d drive to the back of the large field partially filled with scores of other cars. Stars blazed in the black sky overhead

Finding just the right spot, well back from the refreshment stand, I’d swing my ’39 Studebaker up onto the mound, secure the speaker in the window, kick back, eat popcorn, and pretend to watch the movie.

As soon as possible, like every guy around, I was inelegantly groping my date.

It was dark. We were alone – a rare, illicit luxury for teens in the early ’50s. Romance, even sexual expectation, sparked the air.

Windows steamed. Guys everywhere schemed to get to second base. (One – not me, mind you – routinely spilled his root beer on the passenger seat, forcing his date to sit a bit closer.)

The drive-in movie was the sexual touchstone of my youth.

Little did I know that – like live TV, great finned cars, and sexual repression – we were living in its Golden Age. Back then, there were more than 120 outdoor picture shows in my home state of Illinois. Today, about a dozen remain open.

It was on June 6, 1933, that the first drive-in theater opened. With a sheet for a screen and a 1924 Kodak projector on the hood of his car, Richard Hollingshead invented what some later would call “The greatest threat ever to women’s purity” in his New Jersey driveway.

The idea didn’t take off until after the war.

By 1950, however, the patronage of drive-ins exceeded that of indoor theaters. A few years later, the number of drive-ins peaked at 5,000, ranging in size from 64 cars to space for more than 3,000.

The baby boom created the surge. Most theaters had large playgrounds with concession stands serving every junk food imaginable. It was a cheap night out for these young families. At a cost of maybe a buck – in the days with gas was 20¢ a gallon and bread 14¢ a loaf – parents could have a night of family fare at the movies. No baby sitter necessary.

High schoolers back then – we guys, anyway – preferred horror films, like “Blood of Dracula.” Boris Karloff and Bela Lugosi – those guys were perfect. Scary enough to frighten our dates into our protective arms, boring enough that, once there, the movie was soon forgotten. 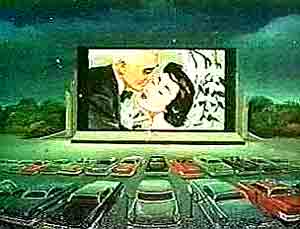 I was dating Jean Walsh that summer of 1952. We were in high school, inseparable, and in love. She was Catholic; I Protestant, a lethal combination in those bigoted days. My mom prayed daily for our break up.

Jean preferred that era’s Doris Day/Rock Hudson “Pillow Talk” films. This was fine with me. They were about as sexy as movies got in those days of twin beds and fade-out kisses, a mirror of my own sex life in the early ’50s.

One lavender-skied evening, I took Jean to see the new Otto Preminger comedy, “The Moon is Blue.” In spite of a plot line where virginal Maggie McNamera resisted every temptation offered by David Niven and William Holden, holding out for marriage or nothing, both Hollywood’s Production Code and the Catholic Church banned the film.

Shamefully, Preminger had used the words “virgin,” “seduce” and “mistress,” all in one script. If he’d added “pregnant,” the film would surely have never have been released, condemned at birth by the Hollywood censors as way too salacious for pure American youth like me.

As innocuous as those words seem today, Jean at first demurred, then steadfastly declined to watch, which, at the time, I though might be better for making out than even Dracula.

Alas, Jean’s religious convictions turned to stomach convulsions. We were out of there long before “seduce” ever came to play.

Let me be the first to admit that, in spite of its randy reputation, the drive-in was always about little more than an innocent first and only kiss in the dark.

Suddenly Trivia answer: b. 397 as of July 2006, according to United Drive In Theatre Association. They are enjoying something of a comeback.

* Doris Day celebrates her 84rd birthday in April, 2008. Others who found their way into our testosterone-laden high school hearts and their approximate ages in 2008:

Marilyn Monroe would have been 82 this June 1st.

For more about drive-ins, go to the Kansas State Historical Society for an article about drive-ins in general and in Kansas specifically. Click on https://www.kshs.org/publicat/heritage/2003spring_novak.pdf