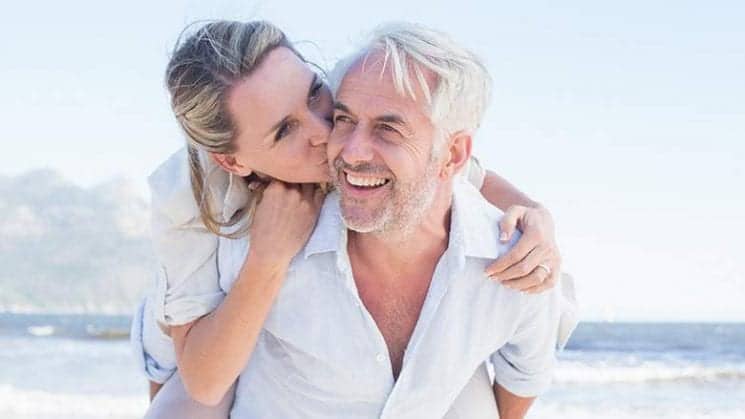 My “One In A Million Man” search run last month by the Suddenly Senior dating pool netted some very interesting results.

Considering that women in my age group have about as much chance of finding a compatible mate as a spider in a forest fire. I will share with you some of what I have experienced in the geriatric dating pool.

These are some of the reasons that this pool of eligible men is sorely in need of some chlorine!

He likes playing tennis, kayaking, skiing the Mammoth powder, rafting the white water, or watching the ‘boys’ battle the Giants, Lakers, or Dodgers. Sure, he would like to engage in a relationship, if you share his passion for sports. I’m not talking ‘indoor sports’ where you might get gently tackled on the bed, gingerly place your pinkie toe across the line of scrimmage, or even make that occasional touchdown on love’s playing field. No! I’m talking about serving finger food to a pack of his friends hollering obscenities at a referee 3,000 miles away!


He is into Sartre, Nietzsche, and Kant. There is very little he doesn’t know about or have an opinion regarding. He’ll take you to museums, art shows, and cultural events ad nauseum, he’ll talk your ear off about esoteric nothings to show you how intelligent he is, and struts about as if he has a bit of a turd under his nose. He makes you feel as if he might find special time for you…like, never!


He will expound Einstein to you, spend hours explaining the dual-core processor or why a Mac is far superior to a PC. Of course, you are dying to know how his ham radio operates and the dimensions of the last radio-controlled model airplane he built! Wouldn’t it be fun to look on while he puts together a gadget for contacting life-forms in another galaxy?


You look sheepishly on as he expounds the virtues of the high colonic enema. Actually, consider (for 30 seconds) accompanying him on a field trip to hunt roots and berries. You attempt to manage a smile while forcing down a cup of his Valerian tea that tastes like he steeped six pairs of stinky socks in two cups of natural spring water. (It should at least put some bounce back in your boobs!) It’s quite an accomplishment, though, carrying on a conversation in a full-lotus position, with a guy who’s meditating over a twenty-pound bag of organic carrots and a Champion juicer.

Here is the guy who spouts moralisms. He rolls holy, speaking in tongues, jumping around as if a fire ant just crawled down his pants. If you like the circus atmosphere of the big top and getting thumped squarely on the forehead, this guy is for you. Maybe you can church together, kneel in the pews, sing hymns, or play some lively rounds of dueling scriptures. He’ll probably be loyal. Until tempted by the pretty lil’ hooker he passes ten times a day in search of souls to save…


This guy is a workaholic, alcoholic, chocoholic, or some other holic. He may invite you to gambler’s anonymous meetings four times a week. He then stops to shoot a quick game of craps in the alley behind the liquor store, where he sends you to pick up four snickers, two almond joys, three butterfingers and a fifth of scotch. The chocolate stains you notice when removing the candy wrapper from the seat of your best Capri’s exiting his vehicle caused some raised eyebrows from the cleaning crew at his office building where you stopped to pick up a few files for him to work on at home.

Oh lordy! Nipple clamps!?! Would it please you to make him clean up your messes? Wipe up the floor? Then force him to stand in the corner on one foot for hours while you leisurely crack a whip in the background and pop bonbons through red-painted lips? Unless you look really good in a black leather corset, fishnet stockings, and thigh-high stiletto boots, you might want to pass on this one.

This guy enjoys nothing more than the sound of his own voice. A disagreement with the subject matter he happens to be expounding upon at the moment is met with: “I’m not here to argue with you!” while his finger pokes holes in the surrounding air. Hell no! He’s just there to wag his arrogant tongue at whomever he is ‘holding court’ with at the time. You should feel privileged that he has taken a few moments away from the mirror to toss his pearls of wisdom in your general direction!

OK…after conversing with this fellow online for about five minutes, you feel compelled to ask his age. You receive this reply: “I’m 23…but I can explain.” “Explain ‘THIS’!” Click.

Of course, I would be remiss if I didn’t mention all of the very sweet responses I received from, as luck would have it, guys who live either on the wrong coast. Or they live in an area (brrrrr) too cold (or on an entirely different continent) for a spoiled southern California brat. However, I have made some very nice friends; people with whom I plan continued correspondence.

Are Dating Sites a Scam Today?

Perhaps I haven’t given it enough time. I’ve become a bit more of a reality-based person. I count the many blessings that have been bestowed upon me in the form of family, friends, and a wealth of interests. There is also the knowledge that I am certainly not alone in my plight. I enjoy the sharing of experiences and camaraderie between us ‘old gals’.

If that ‘One in a Million Man’ doesn’t find his way to my doorstep, I’ll not be a bitter old lady. I’ll still have fun with life and enjoy every moment I’m given; laugh a lot, put smiles on as many faces as possible, and just maybe one day.

A girl can dream, can’t she?