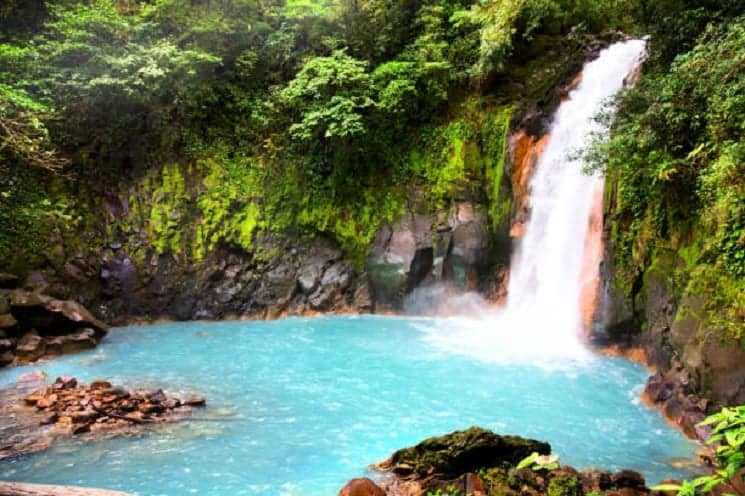 Check out our story about why Americans love Costa Rica so much.

It was that day in Tortuguero, Costa Rica when, from our small flat-bottomed boat we saw spider and white-throated capuchin monkeys, three species of toucans, iridescent iguanas, walk-on-water Jesus Christ lizards, Day-Glo butterflies with wingspans wide as your head, several large caimans, frogs and birds of every hue, that out of the mist suddenly I heard Jake. 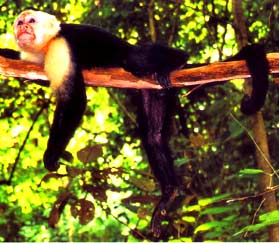 I shivered. The hair on the back of my neck stood, ancient horrors revived.

Jake the Doberman had been my nemesis as a kid. Now I heard his growl, only louder and more werewolfian.

Our guide, Ray Hooker, assured me that what I heard, then saw, were simply howler monkeys leaping from tree to tree high above us.

It’s a jungle out there! Wet with rain and smelling faintly of sweet decay, we were privileged to be in this fecund country with 5 percent of all known species of life on earth occupying less than 0.003 percent of earth’s land area. The place is supremely beautiful. 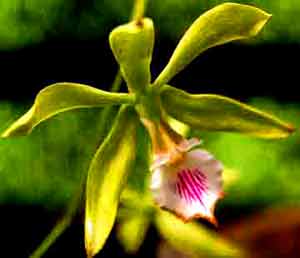 Hooker, who has spent all his life in this remote area whispering its secrets to tourists like me, then pointed to a small green heron that catches insects only to drop them into the black water, fishing for bigger game. What a show-off!

Like so much of this country, the Costa Rican government protects Tortuguero Park. Tourism has enriched the region reachable only by riverboat or small plane. The population has increased five-fold, to well over 1,000. 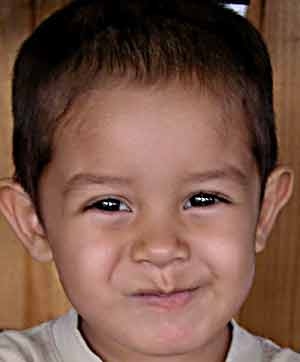 That morning, I explored the Caribbean beach behind our casitas and found the tracks of a loggerhead turtle who, just hours before, fulfilled a 30-year prophecy by returning to the place of her birth, struggling ashore to dig a hole in which to lay 100 or so eggs, one of which may be lucky enough to live to return here in another 30 years, keeping this 160 million-year cycle of life continuing.

Such sightings are uncommon at this point in June, but from the middle of August until mid-September, you have a 99% chance of seeing this miracle when Atlantic green sea turtles return here each year. Even the rare Costa Rican jaguar is sometimes seen swimming across the river for a breakfast omelet.

Our Caravan Tour actually began two days before at the luxurious San José Palacio, an “all-inclusive” hotel where drinks, meals, tips, and extra towels are all included.

Since then, we had toured the capital city, visited the cloud forest with its steam-belching mile-wide Poás Volcano crater, one of seven are active in the country, seen the cascading waterfalls of Braulio Carrillo Park, taken a guided hike through yet another rainforest, and slipped through a forest canopy on an aerial tram.

There are 43 of us on this tour. Mostly professionals – doctors, engineers, some retirees – we’re aged 15 to 82, all are interested in ecology, travel, and nature.

And in a good bargain. At $999 for 10 days, everything, even tips included, this must be the travel deal of a lifetime.

For Carolyn and me, this is our first group tour. And I can tell you we weren’t looking forward to getting “herded from place to place.”

But it wasn’t like that. Our tour guide, Patricia Alfaro, surely one of the most knowledgeable in the world about all things Costa Rican, kept us moving, learning and laughing without ever feeling “grouped.” As it turned out, when I asked folks at the end of the tour what they liked best, most answered, “The fascinating new friends I made.” 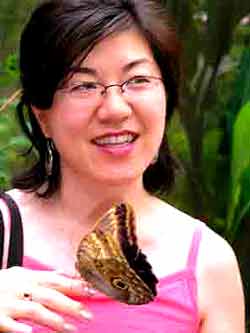 Besides 4-million Ticos, as the friendly Costa Ricans call themselves, this is home to over 240 mammals, 180 amphibian, 230 reptile, and 850 bird species – twice the number of bird species in the entire US. Its democracy is almost as old as our own. It has no army, a relatively high standard of living, and with its huge middle class, this small Central American country is arguably the most equalitarian in Latin America.

Early one morning in La Fortuna, I asked a fellow traveler why he and his wife decided to come on this tour.

How I Got Dental Implants in Costa Rica

“We looked around,” he answered. “Europe’s too expensive and unfriendly. Caribbean islands are boring. Africa is too far away. Hawaii’s a rip-off. Costa Rica is a safe democracy. People like us here. They’re eco-minded. And where else in the world could you have a day like this?” 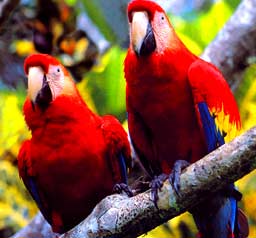 He pointed directly in front of our casita’s railed front porch where dozens of ruby-throated hummingbirds danced from flower to flower in the lush gardens. Beyond, as the mist cleared, the elegant, active Arenal Volcano rumbled and puffed into view.

During our free time that morning, he and his wife were horseback riding to a hidden waterfall while others dressed for white-water rafting, bird watching, mountain biking, or just walking into town.

Costa Rica: The Life of Your Dreams

That afternoon, we would all “take the thermo mineral waters” in the shadow of the volcano where we would choose between 10 large pools with temperatures ranging from 187 degrees down to 104. It was truly “Cocoon,” magically relieving aches and pains as we sat chest-deep at a bar sipping Pepsi’s.

All in all, our new Mercedes big-glassed bus took us 800 miles exploring this most beautiful of countries, meeting kind, warm-hearted people all along the way.

On Day Seven, shortly after departing the Americanized Jaco driving along the Pacific Coast toward the fishing village of Quepos, we passed through an earthquake zone and over the several temporary “Catholic Bridges” each narrower than the last. First, there was the “Oh My God” bridge, followed by the “Help Us, Jesus” bridge and finally the “We Must be Driving on Water” bridge. Someone yelled, “We must be in heaven!”

That’s Costa Rica. Heavenly. So much so that 40,000 Americans have chosen it for their permanent retirement homes.

Retire in Costa Rica: Yes, You Can Afford It

But more about that next time.

After deciding that we didn’t have time to tour – hit-and-miss – on our own, several Suddenly Senior readers recommended Caravan Tours (1-800.227.2826) at $995 for 10 days, all meals, activities, hotels transfers, transportation, excursions, even tips included. (While some other tour companies featured smaller groups, they were more expensive and often offered less.) Plus air.

Our airfare on US Air was about $500 for the two of us from Tampa via Charlotte to San José. Currently, the roundtrip airfare on American Airlines Miami/ San José is $115 plus tax. 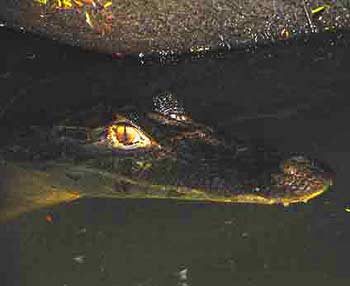 The climate varies from the temperate central highlands of San José to the much warmer Atlantic and Pacific coasts. Remember, you’re only about 10 degrees from the Equator here. Caravan recommends a sweater or light jacket. Carolyn and I each chose to take a lightweight hooded poncho-style raincoat. Plus shorts and loose shirts. A pair of jeans. Casual. Washable. Comfortable water-resistant shoes also are a must. Although the pacing of the tour is excellent and never rushed or strenuous, there is a lot of walking, often in the rain(forests). Laundry service is available at all hotels. And don’t forget your swimwear.

As of June 2005, the exchange rate is 475 colones to the dollar. Conveniently, the once almighty greenback is still powerful in Costa Rica, accepted almost everywhere, as are most credit cards. ATMs are found in major cities. 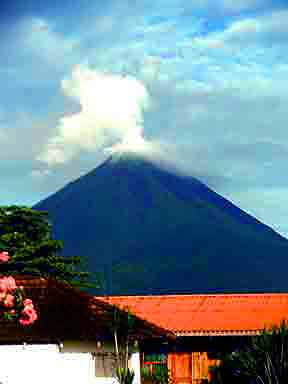 Caravan provides purified water at all meals and free bottled water on the motorcoach. Water is safe to drink in most touristy areas. Breakfasts are usually buffet-style featuring many fresh fruits and eggs cooked to taste. Lunches and dinners generally provide the choice of beef, fish, and chicken with local side dishes.

All hotels, except those in the rainforests and La Fortuna (where there are five Internet cafés in town), have high-speed Internet connections, often free.

Spanish is the official language, but we found that English is spoken in all the stores in which we shopped.

US citizens need only a current US passport valid for six months after your date of entry.

We planned an extra four days after the tour in case there were areas we still wanted to see. It turned out that we spent those extra days taking it easy around the capital of San José, interviewing American retirees, getting massages, shopping, and generally just enjoying our little gem, the quaint, charming, artistic and historic downtown Hotel Don Carlos. $70 – $80 double room including breakfast. (1-866.675.9259) Ask Steve Constantine for Room 29. 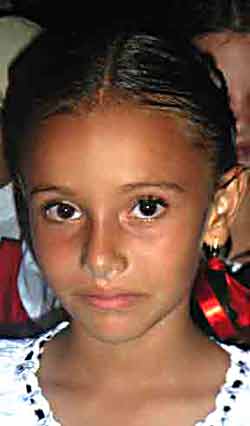 Holbrook Travel. Located in Gainesville, FL, these folks are the official operators of Elderhostel; they own Selva Verde Lodge in the rainforest and are leading authorities on all things Costa Rican.

Explore Costa Rica. These folks are excellent in-country tour operators. They can arrange airport transfers, dinners on top of the mountains overlooking San Jose (with accompanying Fralmeco dancers!) and customized tours and transportation all over Costa Rica.