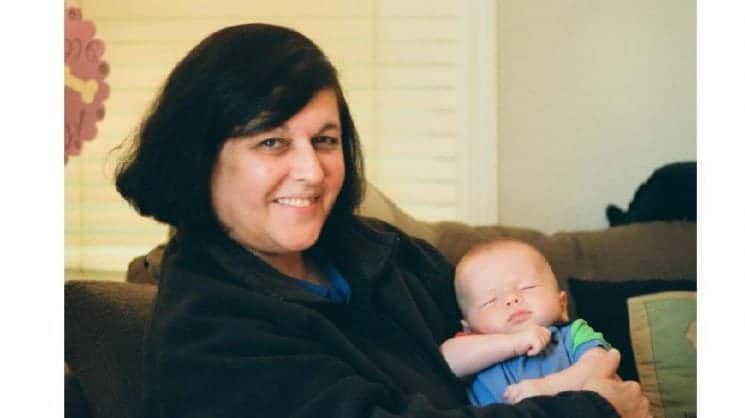 My grandson just turned one. I was lucky enough to be able to be with him to celebrate his birthday. His other grandmother, Wendy, was not.

Wendy was the first person, after my son and daughter-in-law, to hold Benji after he was born.

Did I envy her? Of course!

She and her husband Richard lived near Tom and Amy in California, and I live on the East coast. She was in their lives on a daily basis, in and out of their house all the time. When Benjamin was born, our roles were clear. She was destined to be the grandma on the ground. I would be the fly-in grandma.

Wendy was a smart, funny person with a generous spirit. She had everything it takes to be a terrific grandma. I knew she would be a loving, fun presence in Benji’s life and that she and I would always support each other as fellow grandmas.

Still, I couldn’t help but envy her. Whenever she or Amy posted a photo of Wendy holding the baby on Facebook, some small part of me wished it could be me.

Then one Thursday morning I got a phone call from my son Tom. “Wendy died unexpectedly last night,” he told me. “We need you to come out and help us with the baby.”

Although she was consistently positive and upbeat about it, Wendy had Crohn’s disease. Crohn’s is a serious illness but almost never a fatal one. Nobody had expected it to kill her.

Over 200,000 seniors are diagnosed with IBD like Crohn’s disease every year. Check out the Crohn’s and Colitis Foundation for more information.

I was stunned and the kids were devastated.

A day later, I was in California helping take care of Benji while the kids and Richard mourned Wendy and planned her funeral.

I welcomed the chance to take a more active role in Benji’s life. But not under these circumstances! Yes, I’m a wonderful grandmother. And I’m great with babies. Keeping a baby happy is one of my superpowers.

Benji deserves two terrific grandmothers but was left with just one.

It was an unspeakable loss.

Benji was just seven months old when Wendy died. Amy keeps her mother’s memory alive in her son’s life. She talks about her mother often and has filled the walls of their home with her photos. When we celebrated Benji’s first birthday she played him a video of Wendy singing happy birthday to him.

Some grieving people are unable to talk about their loved one. Amy is taking the opposite approach. Wendy is not going to fade from the memory of anyone in this family if my daughter-in-law has anything to do with it!

Amy’s efforts to honor her mother have made me aware of how present my own mother was in my own son’s life, even though mom died many years before he was born.

Because she stays in my heart and is so often in my thoughts, I spoke of her frequently as Tom was growing up. I’d quote her opinions or comment on whether she’d like or dislike something. “Mom would be proud,” I’d tell my son when he excelled in school. Or “Mom would plotz,” I’d say when he did something — like rock-climbing or scuba-diving — that would have made my overly-protective mom anxious.

As a result, my son has a good sense of who his maternal grandma was and what she meant to me.

Without ever having met Rahl Warren, Tom grew up knowing how wonderful she was and how much I love her. I hope that being aware of this is consoling to Amy as she strives to raise Benji to know and love Wendy.

Keeping mom’s memory alive, of course, isn’t the same thing as being with her.

One of my biggest regrets is that my mom never got to meet her own grandchildren, who were born many years after she died. Nothing would have made her happier than being a grandma. And nobody would have been a more loving and supportive person in my son’s life.

All of Wendy’s loved ones are comforted by the fact that she got to hold Benji. She cared for him and shared the first seven months of his life. And that there are plenty of photos and videos of the two of them that we can share with Benji as he grows.

He may not remember her, but he’ll always know that he was loved by her.

It’s more than my own mother got.

Wendy was with us for far too brief a time and will always be missed. She died a beloved grandma and her family is committed to keeping her memory alive.

It isn’t enough, of course, but it’s what we have.

(Roz Warren www.rosalindwarren.com writes for everyone from the Funny Times to the New York Times. The money she receives for this essay will be donated in Wendy’s memory to the Crohn’s and Colitis Foundation. http://online.ccfa.org/goto/team_wendy). Feature photo by Tom Smith.