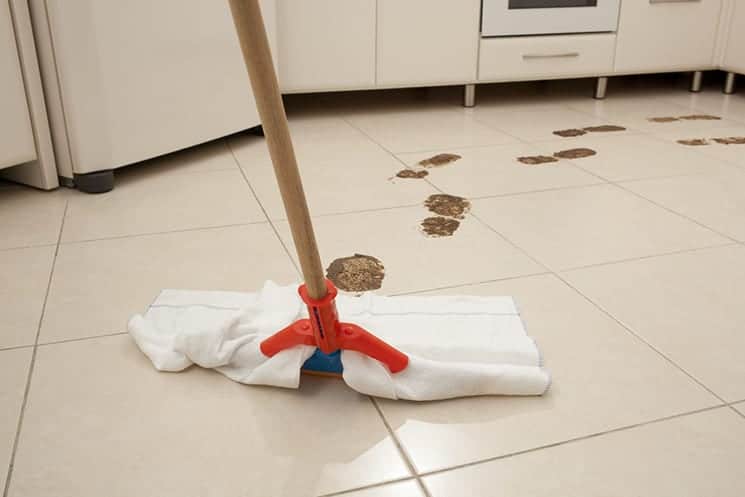 It happened, the break I needed. An hour would have done, not for any clandestine purposes mind you. We were empty-nesters, my man recently retired from drawing perspectives of new buildings for architects. Computers do that these days. And he now keeps busy by attending to some long-overdue renovations to the exterior of the property. When he said he was going to Bunnings, my heart did a little dance.

I called my man the Mop Magnet because every time I kicked off with the mop in the house, he who had been outside (otherwise employed with spanner or spade) would be back inside trekking his murky footprints across the wet floor. It happened time and again even when I tried waiting until after his coffee break, or following lunch when he seemed well and truly occupied in the garden or shed.

Rather than create a big kerfuffle about the whole shebang, I tried locking the door until all the floors were clean and dry. I thought he would recall our conversation on the mopping topic and appreciate why I never answered his untimely knocks. But this too proved ineffective because he kept a key hidden outside, in a secret location. He’d blithely open up and wander inside.
Things became awkward and I admit I became cantankerous. I needed a new strategy and realized it would be best to wait until he went out in the car. The first attempt didn’t quite hit the jackpot because I forgot to factor in his habit of returning to retrieve some object he’d left behind. Things like a wallet, or keys, umbrella, raincoat, or sunglasses.

Then I tried ‘really waiting,’ which is waiting for the kiss goodbye, waiting for the front door to close. (Waiting for his predictable return to retrieve any forgotten item). Then resuming the wait, while the garage door rumbled up on its roller. Waiting for the clunk of the seat belt buckle (I couldn’t actually hear it but could work out what was happening by watching from the window). Waving goodbye, and finally, waiting for the car to veer left and vanish down our street. All this entailed an interminable————– wait.

During one of these lengthy waits, it occurred to me that he could not possibly be a Mop Magnet. My theory was entirely wrong. A Mop Magnet would attract a mop and maybe use it and the fact was he had never, ever picked one up, even though for convenience sake, I kept three different versions in the house. The red swivel and spray, a squeegee and a common old mop with a cotton noggin.

As soon as my man drove off to Bunnings, I grabbed a bottle of chartreuse liquid from the laundry cupboard. I recalled how, when I’d first seen it on the supermarket shelf, I’d stared at the label which said, ‘Lemon Lime Twist.’ I thought then and still thought it sounded more like some type of cocktail or cordial than a disinfectant. The product claimed to kill germs, cut through grease and grime, leave a brilliant shine and lasting fragrance. The knowledge that I’d garnered from working in retail, and watching Gruen on ABC, told me that shrewd marketers used advertising gimmickry to hoodwink the gullible – but I bought it anyway.

I sloshed some of the disinfectants into a bucket of hot water, Ker-plunk! With the squeegee, I attacked the kitchen floor, continued down the staircase and over the tiles until all the hard surfaces in the house looked as slick as a rain-wet road in the streetlight.

The product had exceeded my expectations. I leaned on the mop and released a big sigh of satisfaction because for once; the floors were beginning to dry.

No one had knocked on the door.

No one had walked through the wetness to leave messy footprints. How perfect; I thought it would never happen.

I planned to take a shower then relax in a comfy chair and read my new novel.

Was it my man?

No, a completely different culprit.