The Power of Prayer in Medicine (Prayer Group Miracles) 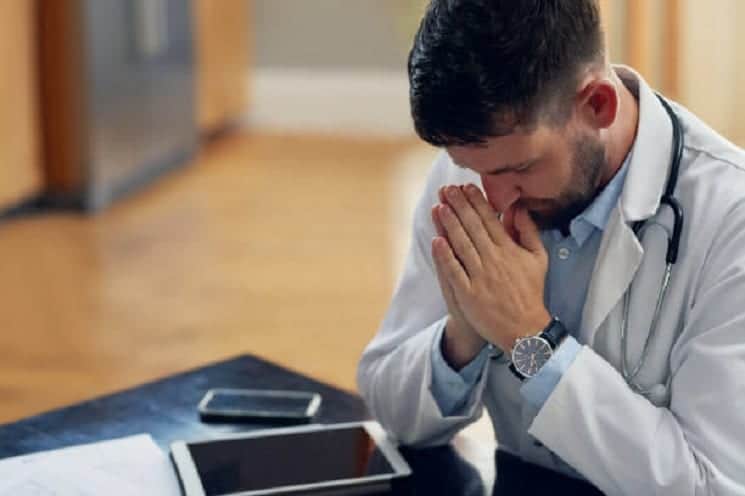 Here’s more evidence that — in medicine, as in all of life — prayer and prayer groups seem to work in mysterious ways.

This "Praying Doctor" is Changing the Medical Field!

People Who Are Prayed for Fare Better

In one recent study, women at an in vitro fertilization clinic had higher pregnancy rates when total strangers were praying for them. Another study finds that people undergoing risky cardiovascular surgery have fewer complications when they are the focus of prayer groups. The fertilization study — conducted at a hospital in Seoul, Korea — found a doubling of the pregnancy rate among women who were prayed for, says Rogerio A. Lobo, MD, chair of Obstetrics and Gynecology at Columbia University School of Medicine in New York City. His study appears in the September issue of the Journal of Reproductive Medicine.

The Lord’s Prayer: A Conversation with God

The randomized study involved 199 women who were undergoing in vitro fertility treatments at a hospital in Seoul, Korea, during 1998 and 1999. All women were selected for the study based on their similar age and fertility factors, Lobo tells WebMD.

Neither the women nor their medical caregivers knew about the study — or that anyone was praying for them.

“We were very careful to control this as rigorously as we could,” Lobo tells WebMD, “We deliberately set it up in an unbiased way.”

The women in the “prayed for” group became pregnant twice as often as the other women, he says.

“We were not expecting to find a positive result,” says Lobo. Researchers have re-analyzed the data several times, to detect any discrepancies — but have been unable to find any, he says.

Lobo admits there may be some “biological variable” that they have not discovered, which could account for the high success rate among the prayed-for women. He and his colleagues are already planning a follow-up study also involving in vitro fertilization.

Only Painted Hussy at a Tent Revival Meeting

The second study involves 150 patients — all having serious heart problems. All scheduled for a procedure called angioplasty. The doctors thread a catheter up into a clogged heart artery, open it up, and insert a little device called a stent to prop it open.

Patients who were prayed for during their procedure had far fewer complications, reports lead author Mitchell W. Krucoff, MD, director of the Ischemia Monitoring Laboratory at Duke University Medical Center and the Durham Veterans Administration Medical Center in Durham, NC.

His study appears in the current issue of the American Heart Journal.

Krucoff enrolled 150 patients who were going to have the stent procedure.

Then he randomly assigned them to receive one of five complementary therapies:

This meant they were prayed for by others, or to no complementary therapy.

All the complementary therapies, except off-site prayer, were performed at the patient’s bedside at least one hour before the cardiac procedures.

Seven prayer groups of varying denominations around the world — Buddhists, Catholics, Moravians, Jews, fundamentalist Christians, Baptists, and the Unity School of Christianity — prayed for specific patients during their procedures.

“This was a very rigorously controlled study, just as we would look at any therapeutic — a new cardiovascular drug, a new stent — and see the results in terms of patients’ outcomes,” Krucoff tells WebMD. The goal was to determine which therapies warranted further study in a bigger trial.

Those in the “prayed for” group had fewer complications than any of the patients, including those receiving other complementary therapies, he says.

“Although it’s not statistical proof, it’s no certainty, it is suggestive — to the point that we’ve already begun a phase II trial.”

He has already enrolled more than 300 people in a phase II study.

Why did prayer in medicine produce the best outcome? “There are no satisfactory mechanistic explanations,” he says. That’s why studies that measure patients’ outcomes are best for this kind of study, he says. Even if you don’t understand why it’s happening, at least you have something to measure — how the patient did.”

Both studies are “well-controlled,” preliminary trials “providing more evidence that there’s something to it all,” says Blair Justice, Ph.D., professor of psychology and psychobiologist (mind-body medicine) at the University of Texas School of Public Health in Houston.

Justice, who has followed prayer in medical research for several decades, reviewed the reports for WebMD.

“Research into prayer in medicine has been going on a lot longer than is reflected in mainstream journals,” Justice tells WebMD. “Since the 1980s, there have been several well-controlled prospective studies, good evidence that this wasn’t some product of a good imagination.”

Some of the studies conducted in Europe involved nonhuman organisms like enzyme cells, bacteria, plants, and animals. None of which could be affected by other complicating factors, including faith.

Doctors assigned groups to pray for their growth; then the prayers were reversed, and people were praying against growth. Each time, the plants responded according to the focus of the prayers.

“There seems to be something to it,” he says.

Current technology does not allow researchers to understand the mechanism behind prayer in medicine — what makes it work. It’s much like gravity and other natural phenomena that were considered mysterious forces by earlier cultures, Justice tells WebMD.

“Keppler was accused of being insane when he said tides were due to the tug of lunar gravity, even Galileo considered it to be ravings of a lunatic — until Marconi proved the theory,” he says.

“It’s just like anything else, you don’t have to believe in it for prayer to have an effect,” says Justice.