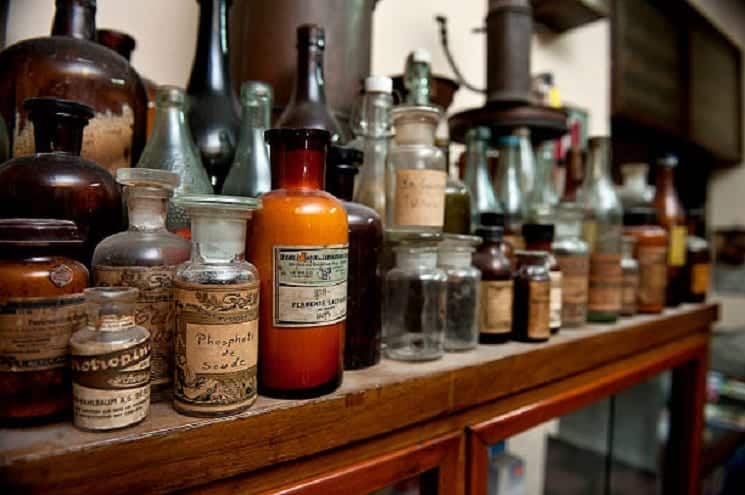 Many of us grew up when neighborhood american drugstores sold little but drugs and sodas.

In the 1940s, as we perched on green vinyl stools at a marble-topped soda fountain slurping our Green Rivers, who knew that from such humble beginnings would spring Walgreen’s and McDonald’s? 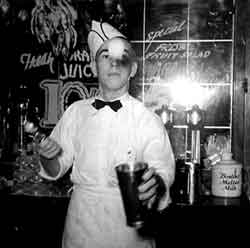 My drugstore, at the corner of Cedar, Meacham and Northwest Highway in Park Ridge, Illinois, was Nielson’s Drugs. It’s where I picked up my grandfather’s insulin, where I got every sixth ice cream cone free, where I took my first date.

Nielson’s, like most all american drugstores of that era, began solely as an apothecary. In those days, druggists weren’t mere pill pushers. With their mortars, pestles and magic – Eureka! – they developed compounds which remedied many illnesses. Legal cocaine and opium played no small part in making most anyone feel better.

Later, soda fountains were introduced for customers with upset stomachs. Drink bubbly mineral water, burp, and you were good as new.

By the time I came along, soft drinks had replaced bicarbonates, and high traffic for soda pop and ice cream had pushed the druggist to the back of the store.

Sure, there was still that bittersweet medicinal/syrupy smell about the place. But no one complained. We were too busy sucking up Vanilla and Cherry Cokes made with syrup and soda water, Lime Rickeys, made from lime juice and soda, and the ever-popular and oh-so-sweet Green River, “First for Thirst Since 1919.” 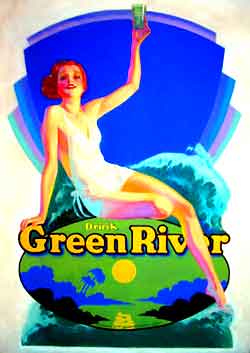 My friend Bob Smith still remembers treating his first date to a Green River, “Triple up on the syrup.”

What better way to impress a 5th grade sweetheart!

I remember the ice cream best. And the best thing about the ice cream was the chocolate malt. You see, by design or accident the malt tins in which they were mixed were bigger than the malt glasses. For two bits you’d get this huge glass of delectable calories, plus a bonus left in the malt tin, next to your glass.

Such soda fountain largess has a lot to do with what old-timers now call the “Good Old Days.”

Meanwhile, about 30 miles west in then small town of St. Charles, Illinois, my friend Gerry Fisher worked at Bagge’s Drugs as soda jerk, inventory clerk, janitor and “Apprentice Pharmacist.” (He had a $2 license from the state to prove it.)

It was 1947. Gerry made 50 cents an hour; the average prescription cost 67 cents. Doctors and clergy got a 10 percent discount. 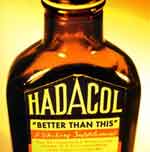 Patent medicines were at least as popular then as now. And for good reason. Lydia Pinkham’s Vegetable Compound (“A Positive Cure for Painful Complaints and Weaknesses so Common to Our Best Female Population”) and Hadacol (“What Put the Pep into Grandma?”) contained so much alcohol that the government later made them illegal to sell without a liquor license.

Epsom Salts and boric acid, too, were found in most medicine cabinets back then. Soaking in the Salts sedated the nervous system as it drew out splinters. And boric acid? Well, today it’s used for killing bugs and treating wood with dry rot. I never did learn its use back then.

So as not to offend, many of the more intimate products were stuffed away in drawers behind the counter. Gerry remembers his confusion when a man asked, sotto voce, for “Safeties.”

“Safeties?” he responded. “What do they do?”

Blushing, the man demanded, “Let me talk to an adult! Now!”

And as “Safeties” euphemized condoms, tampons were “In-Packs.” In those days young girls feared losing their virginity or becoming erotically stimulated by such devices.

Most american drugstore soda fountains did a big lunch business, the first of the fast-food joints. At Bagge’s Drugs, the olive date-nut salad sandwich was most popular. Early hot-dog cookers – electrodes in each end of the wiener – tasted more metallic than meaty and soon were replaced by boiling water.

By 1960 most all corner drug stores were gone, victims of the ubiquitous automobile, supermarkets, and chain pharmacies.

Nielson’s morphed into an architectural office. I often wonder if they ever got rid of that smell.