As we slip and slide toward the inevitable, is there a senior among us who hasn’t pondered heaven? Everyone’s dying to get there. But haven’t you ever wondered about hot sex beyond those pearly gates.

Or the lack thereof.

Eternity is a long time to go without a good roll in the hay.

Questions abound. For those of us with husbands and wives who have passed on, do they meet us in that great white light demanding to know why we remarried after pledging eternal fidelity? And, when all’s said and done, which spouse do you end up with for that eternity?

Add to that the issue of today’s ever-more-popular serial marriages. What if, between you and your spouse, you’ve been married seven times as Carolyn and I have?

Is polygamy allowed in heaven?

According to Mark, when Jesus was asked about this, he said, “For when they shall rise from the dead, they neither marry nor are given in marriage; but are as the angels which are in heaven.”

That begs the question: Do angels do it?

Some yea-sayers point to Genesis 6:2, “That the sons of God [angels] saw the daughters of men that they were fair; and they took them wives of all which they chose.” Others scoff, saying only fallen angels would have penises. Besides, they assert, there are no bathrooms in heaven. No chocolate, either. Who knew?

God, it gets complicated!

Of course, many born-again Christians claim that they and they alone will get the nod from St. Peter. That certainly simplifies things. To these folks, sex a sin unless used for procreation. And it’s doubtful that procreation is much of an issue up there. 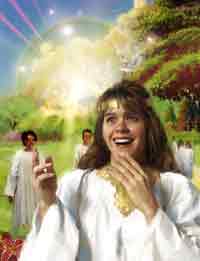 I think we can safely say that K-Y Warming Liquid is not found in most heavenly bathroom cabinets.

But what about Viagra?

Do we enter the Promised Land just as we left the living? If so, this is not good news to many of us over 70. Or, as I prefer to believe, do we enter at an idealized age – say 27 – with a good haircut, comfortable shoes, low slung jeans, and a libido that’s still right up there?

Then again, if all those Upstairs are in their prime, it may take some effort to re-establish relationships with parents and grandparents. Especially when that grandparent is drop-dead gorgeous.

Which brings me back to sex.

With all the imponderables we have about a Christian heaven, I’m surprised more seniors don’t switch to Islam as they approach the life beyond. Having 72 doe-eyed virgins awaiting is a comforting thought.

In the Koran version of heaven, however, the recently deceased marry each and every one of them, a recipe for trouble in Paradise if you ask me.

Even in the Christian Bible, the word “happiness” does not exist, not in heaven nor any place else.

All of this may account for so many believing in reincarnation. Heaven, for all its virtues, angels, and saints, may be a very boring place, even if you enjoy the occasional harp solo.

Perhaps, after a few laps around the heavenly track, human nature gets the best of us. I’ll bet a bit of sin and a bite of bittersweet start to look really good after lollygagging on a cloud for several thousand years.

So in spite of the unavoidable suffering through teens again, I think I’d give these earthly bounds another shot. If indeed we’re here to learn a thing or two about loving our neighbor, I for one could use a few more lessons.

And who knows? By that time the K-Y people may have come up with a product far sexier even than Warming Liquid.