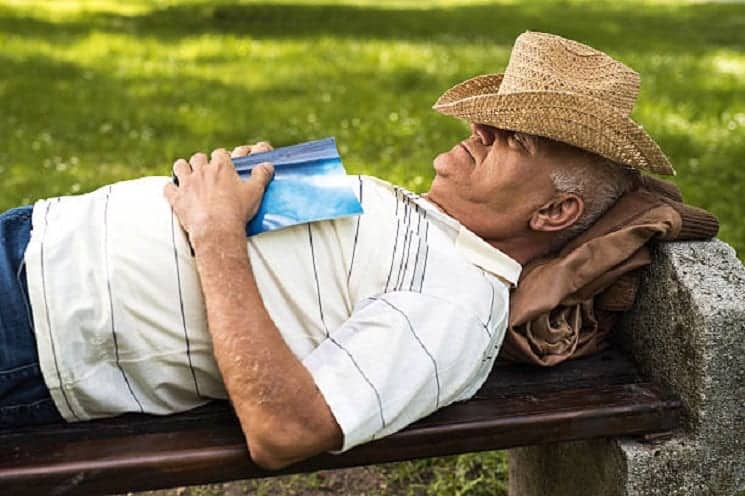 I SEE YOU YAWNING ALREADY!

The napping codger is a cherished American cliché for useless and lazy old age.

For years, I resisted the temptation to sneak off to nap for a half hour or so. Not wanting to be senior before my time, I put napping up there with drinking before noon and wearing white after Labor Day.

It wasn’t worth the guilt.

If nothing else, I believed napping was unfashionable, perhaps even un-American. With so many working at least two jobs or spending all their time looking for one, it’s close to subversive in this country to sleep while the sun’s still up and there’s hay to be made.

Still, falling asleep halfway through an evening of TV is seditious too in its way. Nothing yells, “I’m an old codger” louder than snoring through a rerun of CSI.

Yet according to my napping friends, a midday half-hour siesta keeps you alert right through to the closing commercials of Leno. I can’t tell you how many times I’ve awakened only to wonder if I again missed seeing the opening monolog.

My buddy, J.C. Spitznagel, claims that without naps he’d be sans sex, involuntarily putting sleep before romance. “A half hour nap’s better than Viagra,” he asserts. “A pill to keep your sex life up ain’t worth spit if the rest of you is down snoring.”

Makes sense. And there is growing scientific evidence that restorative naps renew energy and enthusiasm, reduce accidents and errors too. Einstein, Napoleon, Edison, and three recent US presidents were all accomplished nappers.

A recent NASA study reports that a 24-minute nap significantly improves a pilot’s alertness and performance. (Hopefully there is a co-pilot handy, just in case.)

And in Japan, day-snoozing is so popular that a business called The Napping Shop visits companies, erects tents, and provides earplugs and eye masks so workers can snooze on breaks.

Even the N.Y. Times today endorses snoozes for invigorating the ability to pay close attention to details and to make critical decisions. And they do it without mention of geezers! If The Times commends napping, who can be against?

First, know that there are two kinds of naps: what sleep scientists call short ones to revive the brain and long ones to compensate for sleep loss.

According to these learned napologists, the shorter, more common variety should be no more than 30 minutes. Longer than that, your body wants to sleep till morning. Or forever. Extended naps, too, cause grogginess. Better to set your alarm clock and force it short. Also, experts say that it’s best to take your nap about the same time each day. Even if you don’t feel tired, rest anyway.

Napping is a good idea. Get used to it.

Now that I know that napping’s cool, I plan to follow Winston Churchill’s advice:

You must sleep sometime between lunch and dinner, and no halfway measures. Take off your clothes and get into bed. That’s what I always do. Don’t think you will be doing less work because you sleep during the day. That’s a foolish notion helped by people who have no imaginations. You will be able to accomplish more. You get two days in one – well, at least one and a half.

If Winnie’s right, this could well be the beginning of the mend for me. Look out, Leno! Thanks to naptime, I’m all eyes.