Florida Drivers Drive Till They Drop 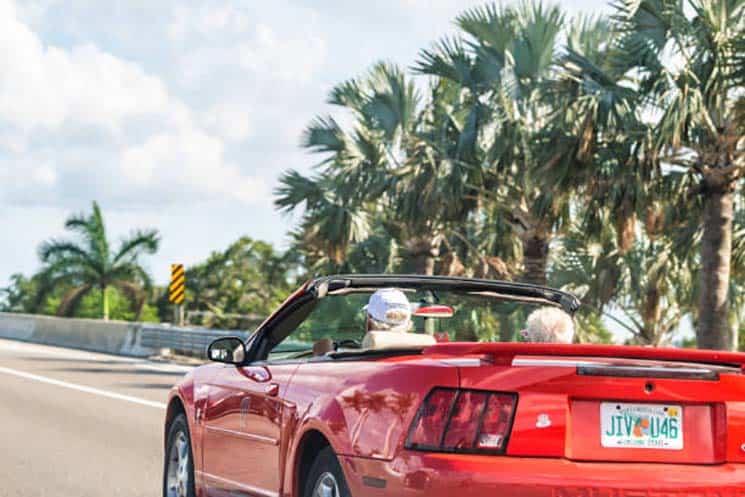 In Florida, geezers rule. If a politician wants to stop us from driving, we just shoot him. It’s the law.

A few weeks back, a local 93-year-old driver struck a pedestrian, severing his leg, and killing him instantly. The driver never slowed.

Three miles later he reached our Sunshine Skyway Bridge where a toll taker happened to notice the victim’s body lodged in the car’s windshield, a single leg jutting out like some huge, bloody hood ornament.

Are You What You Drive? Take My Car

When questioned, the driver said that the body had simply “dropped in from the sky.”

This incident is all the talk at my retirement-center swimming pool. Questions abound.

Will the driver be charged with “leaving an accident” when, in reality, he took it with him? And as there were no witnesses, isn’t it possible the pedestrian was at fault? Perhaps instead of “Suicide by Cop,” this could well have been “Suicide by Coot.”

The driver, many of my fellow swimming-pool bobbers conjecture, drove on in search of a uniform to whom he could report the accident. Clear thinking would dictate: where better to find an official than at a tollbooth?

Today, the State Attorney’s Office reports that the driver is unlikely to face charges because “he did not appear to know what happened or where he was.”

Come To Florida. Get Away With Murder.

Oh, how I love Florida! What other states would excuse bloody homicide by reason of absentmindedness?

(Our state motto should be “Come to Florida and Get Away with Murder.” In an effort to stay ahead of the curve on this one, a new Florida state law pretty much allows you to shoot anyone, anywhere, anytime you feel “threatened.” Visitors should be forewarned to come packing.)

Of course, the big question among my aged cohorts is, “Will they force this spaced-out 93-year-old to stop driving?” In the hearts and minds of geezers across Florida, that is a penalty more severe, more gut-wrenching than getting strapped into Old Sparky, our state’s electric chair.

Although the question of when elderly drivers become dangerous dumbfounds DMVs across the nation, here in Florida the issue is particularly tricky.

Denying seniors’ drivers’ licenses robs many of the freedom we’ve enjoyed since our early teens. Back then, we pretty much started driving when our feet reached the pedals, and “no one’s going to stop us now!”

Loss of a driver’s license is exacerbated here in Florida by a lack of public transportation. And as we duffers vote in record numbers, the entire issue is a kind of “third rail” which no politician wants to address.

Add the fact that our new “shoot anyone anywhere” law includes politicians voting restrictions on geezers behind the wheel, and you have a state where almost anything goes.

I can’t remember the last time my driving was tested by the state. The photo on my driver’s license shows some young fellow with lots of hair. Automatically renewed again just last year, my license is good now until the end of 2010 when I’ll be 75.

Here in Florida, not until we reach 80 is there a mandatory vision test. And it’s not unknown for optically challenged octogenarian road jockeys to employ ringers.

It’s all a big joke here. One version:

I’ve sure gotten old. I’ve had by-pass surgeries, hip replacements, even new knees. I’m half-blind and can’t hear anything quieter than a jet engine. I take 40 different medications that make me dizzy, winded, and subject to blackouts. I can’t remember if I’m 85 or 92, and have poor circulation; I hardly feel my hands and feet anymore. But thank God, I still have my Florida driver’s license!

And I say more power to you, Gramps!

Like wearing our pants just under our armpits, driving is a God-given right. If the State of Florida has a Constitutional Amendment protecting pregnant pigs, – and it does – shouldn’t we have one protecting the right to drive until we drop?

I myself want to be buried in my car. Don’t you?

And I’d be darned disappointed if, during the Rapture, we can’t take our vehicles with us. I’ll bet heaven has no silly driving tests for geezers. Not even for 93-year-old hit men.

In that way, it’ll be a whole lot like Florida.