Cataract Surgery and Recovery (My Experience) 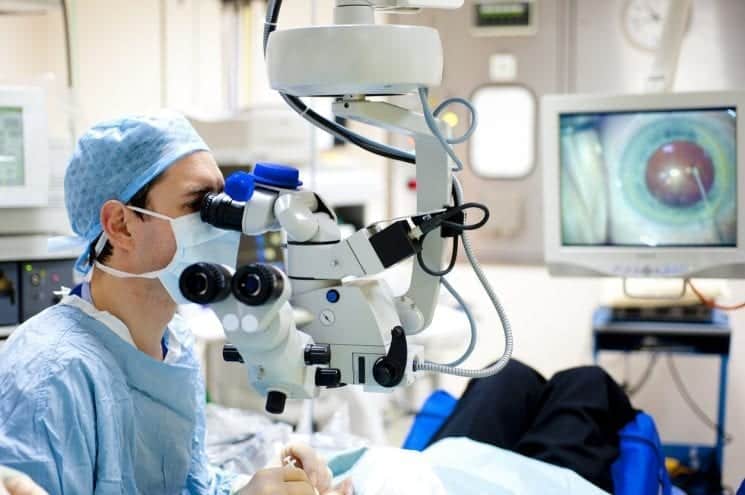 I am fully dressed, lying flat on my back with some sort of paper bag over most of my head, discussing cataract surgery operations with Dr. Herbert Knauf of Eye Site of Clearwater.

“Actually, by ultrasound,” he says. “It breaks up the cataractous lens. I aspirate the fragments and then insert this plastic lens through a tiny incision. No stitches. The eye heals itself.”

What makes this conversation bizarre is that the doctor is operating on my right eye as we talk. I feel no pain. In fact, although my eye is open and his scalpel is in play, I see only a pleasant bluish light, uninterrupted and benign.

Can I Still Square Dance After Having Knee Replacement?

Thirty minutes before, a nurse had anesthetized the eye with a series of drops. An hour from now, I’ll be home. Tomorrow I’ll do everything I normally do except swim. In three days, my focus back, I’ll see better and brighter and sharper than I have in years.

According to an analysis conducted by iData Research, it was found that about 3.8 million cataract surgeries were performed in the United States in 2017 and this number is expected to keep growing. Cataracts affect over 24 million Americans who are 40 or older and by age 75, about 50% of people suffer from this degenerative eye disease.

Like senior discounts, ear hairs, and senior moments, cataracts come with age to three of every four of us. They tend to grow until our vision is so impaired, especially at night, that we must seek help in spite of our common deep-seated fear involving anyone messing with our eyes. Fortunately, due to the growing rates of people with cataracts, procedures to fix them have become much safer and cheaper.

When I first identified my cataract – and, like a fog ball in the middle of your vision, you can’t ignore it – I harked back to my mother-in-law’s cataract operation some 40 years ago. Following her procedure, she was confined to bed for days, her head braced uncomfortably. And for the rest of her life, she was forced to wear Coke-bottle glasses.

Even that was a breeze compared with cataract surgery in ancient times. In the 5th century BC, physicians crudely pushed the cataract to the back of the eye, enabling the patient to see brighter, but unfocused since they had no corrective lenses. Did I mention that they bound the patient, head to foot, prior to operating?

According to the American Academy of Ophthalmology:

Once my cataract was diagnosed, I had nightmares about anesthetizing injections being administered to my eye with a needle the size of a turkey baster. My heart would clench as I envisioned someone cutting into my eye. I watched, horrified, as the blade approached, the pointed edge dripping with blood. (Eye blood?!?) It was a vision worthy of Edgar Allan Poe.

NO PAIN, LOTS OF GAIN

I feared the operation almost as much as I feared blindness itself. So it is for you who know this dread that I write this now.

The operation is, in the words of the lady who had her procedure just before mine, “A piece of chocolate cake.” No pain, lots of gain.

Colors are like summer now, reading is effortless, and night driving is no longer tedious; it’s like having a brand new eye.

Best of all, Medicare pays for most of it. And once removed, cataracts do not grow back.

As a bonus, the large plastic eye patch I wore at bedtime for a week frightened the grandkids. I looked for all the world like a Borg out of Star Trek.

For more information on what’s got to be the most painlessly effective medical procedure this side of childhood inoculations, talk to your ophthalmologist or visit the American Academy of Ophthalmology website at www.aao.org.

THOSE ABOUT TO GET CATARACT SURGERY…

AN OLD FRIEND OF MINE NAN RAMSEY WROTE THE FOLLOWING IN NOVEMBER 2006:

I read your column about cataract surgery and thought I’d pass on some information about mine and Crystalens.

Did you have the new “accommodating” lenses”?

I did, and so far, I’m delighted with them. I’m attaching a copy of a letter to my sisters after the first eye was done (easier than trying to explain it all again). The second one’s done now and working beautifully. The surgery was early enough so that we made it to McDonald’s for breakfast.

I had the big shield on my eye and a bandage on my nose where the surgeon had removed a small blood tumor. An old guy stopped at our booth and looked at me, then looked at Wally and said, “Well, why don’t you have a black eye?” Guess he thought Wally had won!

Here’s the promised summary – so far. I know I’ve told each of you bits and pieces, but I wanted to get it all together, partly for my own edification. Fran, it may be helpful when you get to the point of making a decision, and Laura, the cataract monster will probably catch up with you, too, eventually.

What to Expect After Cataract Surgery

The first thing I noticed, of course, was the vibrancy of colors. Things I had thought were white before, like the refrigerator, had actually been yellowish, and became bright blue-white. The whites were the most noticeable, but all colors became brighter. That was due to the removal of the sick old lens and doesn’t affect focus. I was expecting this, so it didn’t surprise me, but it’s really great.

I had been expecting perfect distance vision, but it’s not. It’s good, and better than legal for driving, for the first time in my life. I guess you know that ever since I got my first license at 16, I’ve had a “corrective lenses” restriction on it. I think, and hope, that after the 2nd surgery, it will be even better, since the two will be working together.

The Rx is for distance (the movement of the lens provides intermediate and near vision) and apparently can’t be exact – it goes in .5 increments (.5 of what I don’t understand, yet) – so whichever way the 1st one is off, the 2nd one can compensate for (I know it’s a preposition, but I’m in a hurry).

As for intermediate vision, on waking up in the middle of the night I can read the illuminated clock without scrunching up my face into a huge squint. And I can read the bathroom scale (Sue said, “Well, that’s not a benefit) and I can read my watch, all without glasses.

Things to Consider When Buying Glasses

I guess I should say “glass” because the left lens (in my glasses) was removed. I can use the computer now without glasses, and one of these days I’m going to try the piano again.

Near vision is getting better all the time. I was not supposed to read for the first week (which was really difficult) and then start reading to exercise the ciliary muscles and train them to move the lens. After 3 weeks, I found out that I wasn’t doing it correctly.

I was reading a lot but holding the page where I could see it comfortably. I should have been moving it closer to force the muscles to work. As soon as I started doing that, the change was dramatic. Apparently, the lens had been just sitting there, and moving the page closer jarred it loose and made the muscles move it. I can now read very small print easily.

It’s rather disconcerting having one good eye and one bad one (or one bad corrected one). Television is a little better with the right eye corrected, as is the distance in general. But if I’m wearing my glasses when using intermediate vision, like cooking, I find I’m looking through the top half of the bifocal with my chin down on my chest – until I realize what I’m doing and take them off.

Side Effects of Having Cataract Surgery

I had a “scratchy eye” problem a week and a half after the surgery, and, of course, it was on a Saturday night (like plumbing leaks and furnaces that quit). It really hurt!!

I called the answering service and a technician called me back right away and solved the problem (took about 3 days for the scratchiness to completely disappear). I guess it was a dry spot.

It helps a great deal to have an ophthalmologist, optometrist, and whole staff that you trust and like, which I have. They’re all super-friendly, cheerful, and, most important, knowledgeable, and helpful. And they put up with my never-ending questions (no comments from you, Fran!).

I’ve never been a medical guinea pig type, but I’m glad I took a chance on being Dr. Alward’s first Crystalens patient. Actually, it’s the same surgery that he’s done 25,000 times, just a different lens and slightly larger incision. All this after-stuff is different, of course, and I guess we’re all learning together, but if it all keeps going this well, I don’t mind at all being a “practice patient”.

So that’s how it stands, up to this point. After the 2nd one is done on Halloween I’ll send another update.

IN A BLINK OF AN EYE

Cataract surgery might seem scary, especially as we get older. We know that no matter how small a procedure might be, it always has a risk. However, the rewards of fixing your vision are definitely worth it. Over 98% of all cataract procedures are successful, so don’t be scared! The odds are in your favor. Procedures are no longer as intrusive as they were in our youth. Medical technology has advanced so much in the last few years, that your cataract procedure will be over in a blink of an eye.