Traveling by Amtrak Across Country Guide 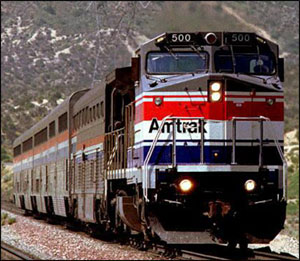 This is the time of the year when people start thinking about booking summer and fall vacations. If you don’t book early, some tour companies run out of space, especially within the national parks. Many big tour companies reserve rooms a year in advance and usually when they run out of rooms, there aren’t anymore until the following year. Have you considered traveling by Amtrak?

I have also run across in my travels many train buffs. There is definitely a romance with the rails. When dealing with Amtrak you have to sit back and enjoy the ride and the scenery, but expect issues can happen. I think if your expectations aren’t too high, you can much more appreciate the journey. is a government-owned corporation with the rails primarily owned by freight companies. Passenger trains must yield to freighters. If the passenger trains become delayed for any reason, they have to pull over and let the freight trains go by. Sometimes this can make you even later. So if you are in a hurry, don’t take the train. 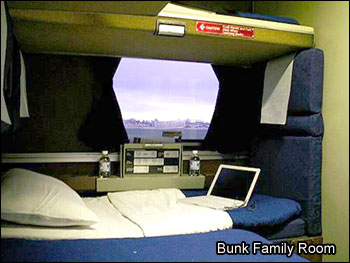 You meet very nice people when traveling by rail. The dining car contains booths that seat four. If there is one or two of you, expect to be seated with others. If you can afford it, a sleeper (with bathroom) or even a roomette (bathroom down the hall) is the way to go. You have all your meals included since this is considered 1st class. You also have coffee, water, and juice all day and ice brought to your room. A morning newspaper is delivered after the first morning stop.

Sitting up can be a little tiresome and there is no privacy. However, if you can’t afford a room, this type of travel is an option. You will hear the people who snore and if you need to use the bathroom, you have to go downstairs. Small pillows are provided but no blankets. If you know ahead of time what to expect, it isn’t quite so bad. It’s all about the spirit of adventure and going to new, and sometimes, remote places.

The 1st class passengers get the first choice of dinner times so if you are in coach expect a later dinner, especially in the summer when popular trains have several sleeping cars that have to be accommodated first. I know many seniors tend to dislike eating late but there is a snack bar to hold you over while you wait for dinner or as a substitute for the dining room. And, you can even have your coach attendant bring your meal to your seat if necessary.

On the long-distance trains, the food is prepared on board. Although when they are busy in the summer, sometimes the food can be overcooked as if it was prepared quite a bit ahead of time. On the shorter trains, like the City of New Orleans, “airplane”/microwave food is served. 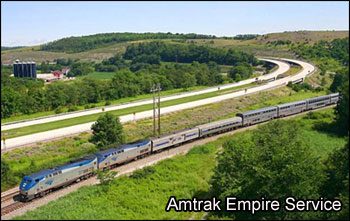 The trains that run along the West or East coasts, as well as some smaller train runs like the between New York and Buffalo and the Hiawatha between Chicago and Milwaukee, will make several trips a day back and forth to their destinations and so they are very profitable for Amtrak. Trains from Chicago to New York or Washington, DC like the or, are shorter distance trains since the distance between Chicago and the East Coast isn’t as long as West coast trains. These trains leave Chicago in the evening and the next day, you are at your destination. 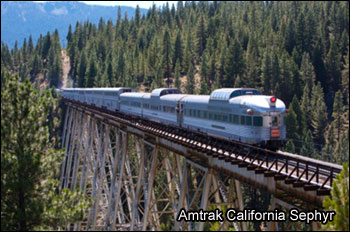 The older trains and ones with the most issues, especially during the busy summer months, are the long-distance Western trains. The scenery is more spectacular on these trains, but the one I have found with the most inconsistent service and the extremely overworked staff is the California Sephyr. While very few employees are not up to par, most are just extremely overworked. But the many good employees Amtrak has (and there are lots of them), have one thing in common: they love their work. I have seen some dining car staff get little more than 4-5 hours sleep in the summer when there are so many sleeper cars, but they still treat their passengers with care. Many of my travelers constantly ask, why don’t they put on an extra dining car? That is a very good question, but it all probably boils down to cost-effectiveness. 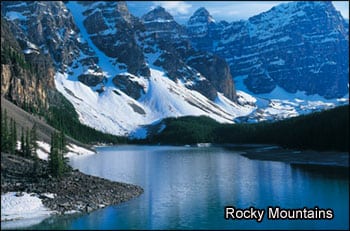 It is odd that the train with the most issues is also my favorite. For scenery, hands down, you can’t beat the Rocky Mountains. After leaving Chicago, the next morning you are in Denver & as you depart that city, everything gets vertical all day in the Rocky Mountains. Later that evening you get to Salt Lake and then ride through the desert as you sleep your second night on the train. The next morning, it’s Reno, NV. Then another beautiful mountain chain, the Sierra Nevada and all the wonderful tunnels and hills of ponderosa pines as you travel to the Oakland/San Francisco area. 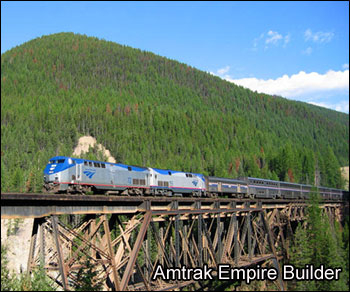 The scenery on the Empire Builder is also really stunning. While the Mississippi River and the Badlands of North Dakota have their own beauty, the run between Glacier National Park and Seattle in the Cascade Mountains is truly awesome. This track was not built until the late 1800’s. Then in the early 1900s, the great Western lodges were constructed to bring the wealthy Easterners to the remote National Parks. The Empire builder is billed as a 1st class train. Service is consistently good and they even have wine tasting for 1st class passengers. 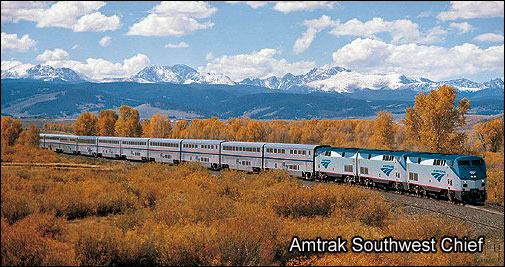 Another favorite train is the Southwest Chief. There is something special about watching the buttes, mesas and the Southwest desert that has a beauty all its own. The crew on this train comes out of LA and I have always found the service to be very good on this train, also. 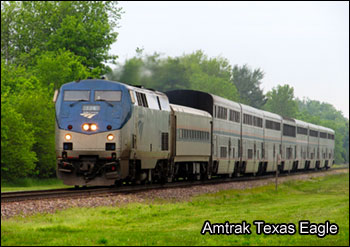 I haven’t been on the Texas Eagle for quite a few years. It goes from Chicago to St Louis, Dallas and finally San Antonio. There it meets up with the Sunset Limited coming from New Orleans and going to LA. One time on the Sunset Limited, I woke up in the middle of the night and looked out. It was a night with a full moon and the huge sand dunes in the Sonora desert looked like we were traveling on a distant planet. The Sunset Limited used to be the only cross-country train. However, after Hurricane Katrina, the New Orleans to Florida section was not resumed. 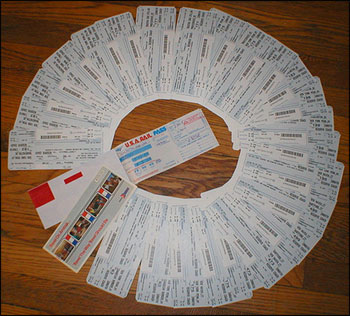 Amtrak has a for 15, 30, or 45 days so you can experience all these trains at one time (with stopovers where you choose). However, it is not as easy to use as the Railpass in Europe and sometimes it is not the cheapest way to travel. You also need to make advanced reservations and sleeping accommodations are extra. This is an option, though, if you want to see the USA by rail in a short period of time. Just make sure you plan your route ahead, especially if it’s summer and you want a sleeper.

I know this article sounds a little negative, but it isn’t meant to. I actually love riding the rails. However, some of the things I am talking about are issues that come up with my travelers. And, I have always found if your expectations aren’t too high, you won’t be disappointed. Most of the time if you know some of these things might happen, it doesn’t seem quite as bad if it does.

You really do meet some of the nicest people on trains, and there are many who travel all over the US by Amtrak. I think sometimes we can get spoiled by our fast-paced world. At one time, train travel was a luxurious way to travel. It still can be lots of fun, if taken in the spirit of adventure it is. Always remember, “it is the journey and not the destination.”

After traveling by rail, you make start to ask yourself “Will Airlines Force Us Back to Trains?”