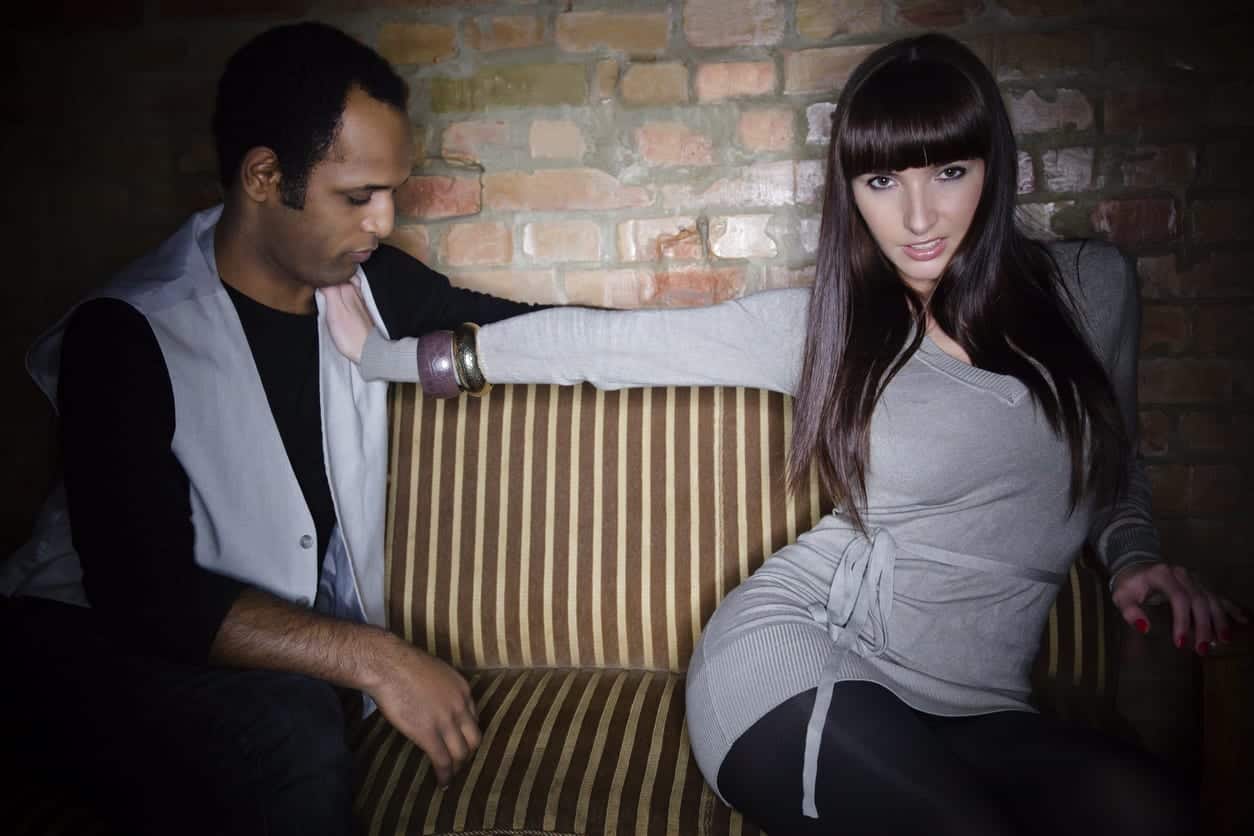 So I met this guy for coffee. We were getting along well, filling each other in on our respective romantic histories. His amicable divorce. My acrimonious break-up. We shared a small table by the wall at my favorite coffee shop. He was in a chair and I, on my side of the table, had a bench.

“Do you mind if I sit next to you?” he asked after we’d been chatting a while. “I have a little hearing loss and I’m having trouble hearing you.”

So he moved over to sit beside me on the bench. But instead of sitting a reasonable distance away, he plunked himself down so that there was absolutely no space between us. He was basically squeezed right up next to me. There was plenty of room on the bench for him to give me a little room — but he didn’t!

As we continued to talk, I scootched away from him just a bit to put a little air between us. He immediately moved so that we were “thisclose” again.

Meanwhile, we continued our engaging conversation. About his life in academia. My terrific library job. Our taste in music and movies. But inside I was freaking out because this man was sitting too damn close for somebody I ‘d just met.

Being polite and well-mannered, I didn’t interrupt our pleasant getting-to-know-you chat to say “Back off and give me some room!” But I really wanted to. And every time I tried to shift away to give myself a little space, he just moved in closer — like a python gently squeezing its victim.

The chorus from that Police song started going through my head — “Don’t stand, don’t stand so close to me…”

There was nothing smarmy or off-putting about anything else he said or did. His overall vibe was friendly, not creepy. But still — what was wrong with him? There was such a weird disconnect between his pleasant effect and the fact that he insisted on pressing up next to me.

We parted on a friendly note, and while I had otherwise found him attractive, I was mostly relieved to get my space back. He probably assumed that we’d see each other again. I wasn’t so sure.

I described the experience to my friends later, and asked, “What would you have done?”

“This happened to me too,” said Jill. “I didn’t confront my date directly either, because I didn’t want him to get defensive. I managed to get us moved to a different area where I didn’t have to sit beside him. But I didn’t see him again.”

“Maybe it’s just his way of showing interest?” suggested Robin. “Although when somebody clearly moves away when you move closer that should be a clear signal to back off.”

“Guys can be oblivious to body language when it comes to getting what they want – which is to touch you,” Suzi observed. “Maybe he thinks that kind of physical closeness is appealing? When really it’s just the opposite.”

I told them that a friend of mine who happened to be at the coffee shop at the time noticed how close my date was sitting and told me afterward that I’d looked “trapped.” So I was conveying — at least to somebody who knew me — that I was uncomfortable. But I wasn’t conveying it effectively to my date.

Or I was, but he was ignoring that signal.

The Concept of Personal Space

“Some people just don’t understand the concept of personal space,” said Sara. “You probably should have said something. But I hate to rock the boat, especially on a first date, so I probably wouldn’t have said anything either.”

“Maybe he understood it all too well,” countered Annie. “One-way potential abusers test whether you’re going to be a good victim is to violate obvious boundaries and see whether you protest. I’m not saying this guy is an abuser. But his behavior is in-line with how abusers behave early on in relationships.”

Are Dating Sites a Scam Today?

“Maybe his hearing loss is just more severe than he’s willing to let on?” offered Robin. “Maybe you can meet at a quieter venue next time?”

That got an eye roll from Annie. “Call me a cynic,” she said, “but I can’t help but wonder if the hearing loss is just an excuse to move in on you.”

“Pushing back a bit in a light-hearted, jokey way can work,” suggested Suzi. “I probably would have blurted out something like ‘Back off, Dude! I’m a little too high anxiety for you to be bumping up with me when I don’t really know you.'”

“At Baptist college,” Jill recalled, “we’d say ‘Leave some space for Jesus’ when a man started dancing too close. It was said in a humorous way, but it got the point across.”

“It makes me angry that women need to do this,” Annie protested. “He violated your space. Repeatedly. He should have known better. Why is it on you to ask him to stop in such a way that he won’t be offended?”

“Date or not,” proclaimed Suzi, “there is such a thing as a ‘bubble of personal space’ and the bubble shall not be violated unless intimacy is desired!”

“As someone who takes the subway every day,” said Robin, “I know that while the bubble should be respected, sometimes it’s just sardine time and you have to put up with it. Maybe the dude takes public transportation at rush hour so often that his sense of personal space has been permanently eroded?

“Or maybe getting that close to a woman on a first date is some kind of a weird turn-on for him?” suggested Annie. “Either way you shouldn’t have to explain to a grown man what is socially appropriate and what is not. If he doesn’t know better, he either has far more serious issues than that — or he just doesn’t care how you feel. Either way? You deserve better!”

My friends like me, are women in their 60s. We were raised in an era where girls were told to be nice. Go along. Don’t make a fuss. Six decades later? I think it’s time to defy this early training and push back.

No second date for Monty Python!

And if this ever happens again? I plan to speak up. Maybe I’ll be polite but firm. (“Please move over. I need more room.”) Maybe I’ll be pleasant and jokey. (“I may love sci-fi, but I don’t want to date a space invader!”)

Or maybe I’ll jettison six decades of nice, polite behavior and just cut loose: “What the hell are you trying to pull? This is the first date in a coffee shop, not a make-out session in the back seat of your car. Back off!”

Do you dare me?

Congrats to Roz! Reader’s Digest published her article, “Drivers Make Hilarious Confessions About How Clean Their Cars Really Are“.

Roz Warren, who writes for everyone from the Funny Times to the New York Times, is the author of Our Bodies, Our Shelves: A Collection of Library Humor.