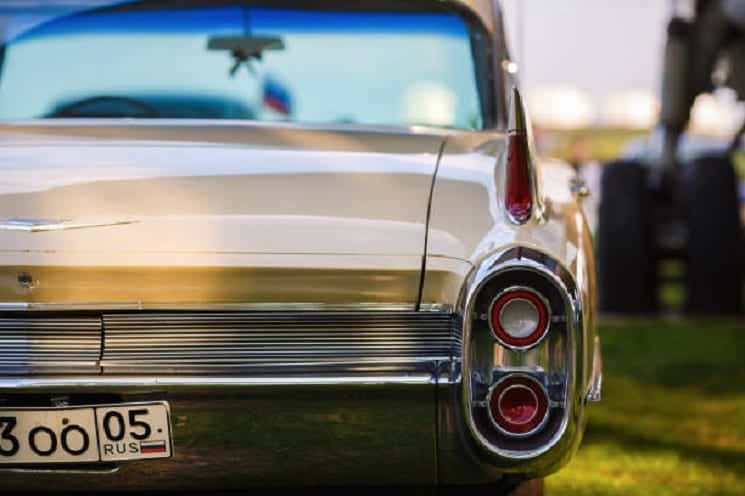 When someone complains about how “things ain’t like they used to be,” the “used to be” is often the 1950s.

Drawing from narrow, selective memories, we 60- and 70-somethings remember fondly the sweet innocence of that era. The idyllic domesticity of Father Knows Best. The unsullied humor of I Love Lucy. The temperance of kids, safe and content, wearing and doing as they were told.

Movies didn’t swear, TV had no sex, and magazines revealed only the smiling, wholesome side of life.

Sounds boring, doesn’t it? It was.

Except for our cars.

Are You What You Drive? Take My Car

This is the story of my father’s cars.

My dad was crippled. It’s politically correct to say “disabled” or “handicapped,” but he was neither. It’s just that his arms and legs atrophied when, at age 10, doctors put his limbs in casts for several years, that era’s treatment for childhood rheumatism.

In 1940, when Oldsmobile came out with HydraMatic, the first automatic-shift, Dad wanted one. His huge, clumsy, custom-built shoes made clutching difficult. An automatic shift would make driving more pleasant, and driving was pretty much the only way he could get around.

WWII intervened. It was six years before he got his HydraMatic.

By the time I started paying attention, he was on his third Olds, a 1949 “Rocket 88.” I learned to drive in that car. It was fast as lightning, and I drove every volt of it.

After the war, Detroit discovered branding and artificial obsolescence, two cornerstones of a consumer-driven society. In those days, there were Ford men, and Chevy men, Buick men and Chrysler men. My dad was an Olds man. 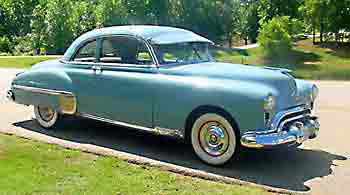 Every September, when the next year’s car models appeared in showrooms across the country with their sleek new this and thats, it was a national event.

Unlike today’s cookie cutters, cars of the ’50s had character. You could tell a Buick by its signature portholes. Oldsmobiles looked like rocket ships, with huge chromed jet intakes and sleek aerodynamic bodies. Studebakers? “They’re dangerous,” a cop warned me when I was a patrol boy in 5th grade. “You can’t tell if they’re coming or going.”

Artificial obsolescence demanded change for the sake of change. Cadillac’s little rear fins of 1948 grew to gigantic proportions by 1959, towering three and one-half feet above the pavement, terminating into multiple tail lights glowing like frozen bursts of fire from a rocket on high.

In front, chrome bumpers had morphed and embellished into women’s breasts, or “Dagmars,” named after an early TV bimbo. Under the hood were 345 horses.

By the mid ’50s, the average middle-priced car wore almost 50 pounds of superfluous chrome. God only knew how much Cadillac’s boundless jewelry weighed. It was “irrational exuberance” by any measure.

Which takes me back to my dad.

Each September he would drive home in a bright and shiny new Oldsmobile convertible. It was his pride and joy, his only extravagance.

Then, in September of 1959, my father came home in a Cadillac, a yellow and white convertible with enough chrome to make Las Vegas blush. The car was huge. A barge fit for Cleopatra. A ship worthy of Zeus.

He drove up the driveway, honked, and waited for my mother to come out and ooh and ah.

Mom stayed inside. He honked and honked.

Dad soon realized he was in big trouble. He went in after her. She refused to move. Mom would not have a Cadillac. A Caddy was too expensive. It was ostentatious. It ate too much fuel. And it probably wouldn’t fit in the garage.

They were not Cadillac kind of people.

Dad walked out to the car, threw his cane into the back seat, and drove away, returning in a new, more sensible Oldsmobile. The Cadillac was never spoken of again.

You know what I think? Mom tolerated the hair-tormenting convertibles year after year because she loved the man. But for a woman brought up in a world where hard work and self denial were the ultimate satisfactions, the Cadillac was just too much. It was Jezebel – beautiful, sensuous and forbidden, a wanton mistress that threatened the very stability and sanctity of marriage.

It was an affair, and it was over before it began.

Suddenly Trivia Answer: The factory price of a 1959 Cadillac convertible was b) $5,455.