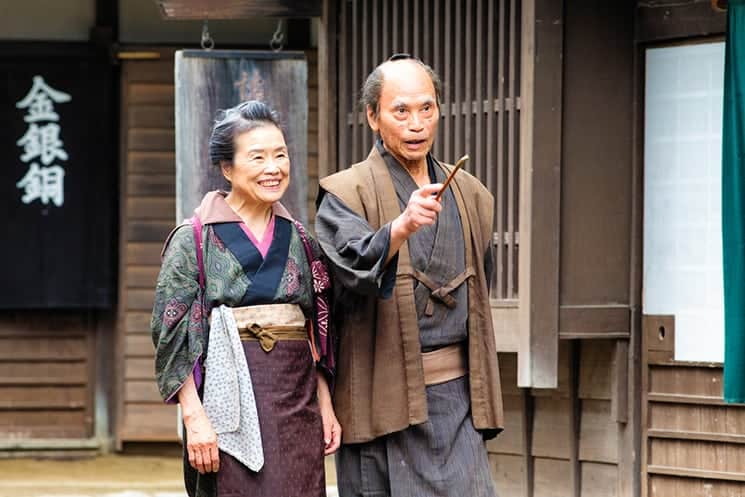 I don’t know whether it was my second or third trip driving through Sendai, Japan in the 1950s. It was then that I noticed two old Nipponese women sitting on a bench outside one of the local train stations.

I was an analyst for an Army Intelligence operation in Japan. It had a detachment near the harbor in Sendai and I visited the area from 1956 to 1958. 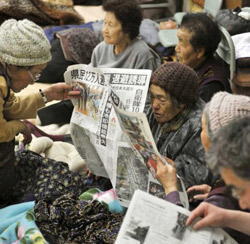 Sometimes only one of the old Japanese women would be there in front of the station. Sometimes she would be joined by the other. They were both always clad in cone-shaped straw hats, dark work shirts, black pants, and black shoes or boots; with a split between the big toe and the others.

One day I asked a young Japanese who worked for us about them. He told me this was not an uncommon sight in many areas of Japan. When elderly women were no longer capable of producing and became a burden on their family, they often found a place like the local train station to spend their last days. There were no social safety nets to protect them. Many even went to their temple and received a blessing that was to ensure them of a comfortable death even if it included suicide.

The suicide rate among Japanese seniors was extraordinarily high for many, many years. This continued until the Japanese government undertook several social programs to provide proper care for the elderly numerous years ago.

For most of its 2,500-year existence, Japan had only about 5 percent of its population that was over 60-65 years old. Living conditions and wars had managed to keep the elderly population down. As late as the 1950s, the life expectancy in Japan barely exceeded 50 years. In the last half-century, it has risen to around 80 years. The number of elderly in the Japanese population has grown to between 20 and 25 percent of the total population.

Things were just getting comfortable for Japanese seniors. Although, the Japanese government was facing a financial disaster in funding its elderly programs. Then the “Big One” hit. It was an earthquake-like none ever seen before in this earthquake-prone country. It was followed by a tsunami that inundated and totally destroyed much of Nippon’s northeast coast. 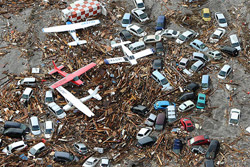 None of the areas in which we had operations and worked around Sendai in the 1950s was left intact by the 9.0 quake that hit Japan. Top that off with a looming nuclear disaster in the region and nothing bodes well for the local population, especially the elderly.

One of the first photos to hit the Internet and news programs the morning the quake hit was one of several private planes trashed in the rubble of what had been the Sendai airport. I immediately recognized them as belonging to a friend of mine and shot an e-mail message off to him.

Luckily he and his wife, who is a flight attendant for a major airline that flies back and forth between Atlanta, GA, and Tokyo, were in Atlanta at the time. But their daughter was on spring break visiting her aunt and grandmother in Sendai.

By the end of the first day, the daughter was able to get a text message out to her parents in Atlanta that she was fine but her aunt and grandmother were missing. The next day she was able to find her aunt, who had made it to high ground before the tsunami hit, The family spent a suspense-filled three more days before the grandmother was located. She and a dozen of her friends had made it to a nursing home and climbed above the floodwaters. When the tsunami waters subsided, it was the only building left standing in the area. They spent three days in the building without food, water, or heat. All in the freezing winter weather before they were discovered. 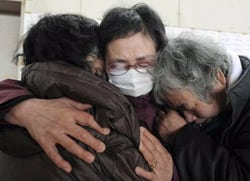 Not many were that lucky. The death toll from the quake and tsunami will reach the tens of thousands before they are done counting them. Many of them will be seniors.

An estimated half-million Japanese are existing in shelters. Millions more live in the streets as the Japanese struggle to get a new recovery going. There is a paucity of food and water plus deplorable sanitary conditions. But in these beginning phases of the recovery, things remain relatively orderly. There is no looting. The Japanese queue up in polite lines for what few supplies they can obtain.

Over the longer run, if roads and rails cannot be quickly repaired to get basic necessities to the people, there is no telling what will happen. It will be a test of whether or not cultural politeness can trump starvation and disease. Notwithstanding, whatever added burden the teetering nuclear disaster foists upon the quake survivors.

The Japanese are very resourceful. I watched them recover from the disaster of World War II, but it was not without pain.

In the same Sendai area, at Camp Weir U.S. Army base in 1957, there were a high number of elderly women scavenging expended ammunition brass from the rifle range. This resulted in one being shot and killed by an American soldier, Spec. 3rd Class William Girard. Girard was convicted of the killing in a compromise settlement between the U.S. Army and the Japanese civilian government. A compromise not necessarily satisfactory to either party. But one that kicked off an international incident that held the headlines in both countries for many weeks. 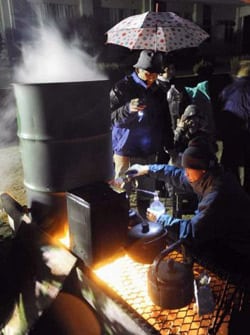 On the day of the shooting, there were upwards of 150 elderly Japanese scrounging for a living on the Camp Weir rifle range. Japan has come a long way in providing better living conditions for its elderly since 1957. But at a cost that has severely crippled its economy a decade into a national economic stalemate.

If the cost of providing for the Japanese elderly cannot be brought down, it could mean raising the retirement age. The result means providing only a three-year social safety net on the average for the elderly.

It’s unimaginable. As more reach retirement age, Japan’s birthrate is not high enough to replace those in the workforce; who pay the taxes needed to support the elderly.

It’s a disaster piled now upon three more disasters; a historic earthquake, followed by a historic tsunami over which hangs a major nuclear disaster.

The photos I am seeing of people huddling around open fires, cooking in the streets, and huddling together in makeshift shelters remind me of that part of the Japanese recovery I witnessed in the 1950s.

My prayers are that we never again see old Japanese women sitting out their lives at a train station. Or betting their lives on the brass they can scrounge from a firing range.

My thanks are to the God that blessed me with being born in a country where, although we are prone to complain about it, we who have become “suddenly senior” are amply provided for by a cornucopia of safety nets.

Dave Whitney is a retired journalist and adventurer who has won many writing awards. He was born and raised in central Ohio. He attended school in Missouri, served in the US Army Security Agency, and migrated to Florida a half-century ago. Author of four books, he is a former Associated Press writer/editor. He has been nominated three times for the Pulitzer Prize during his writing career. He’s the editor and founder of the Free Press newspapers in the Florida Keys. He’s the first publisher to become a “Suddenly Senior” columnist. Whitney currently resides in Lakeland, Fla., after living 25 years in the Florida Keys.