Finding yourself single and over 50 can be like falling down the proverbial rabbit hole. For women, even the statistics are topsy-turvy.

Today, Grandmas buy Trojans along with their Fixodent. Grandpas puzzle over whether to hold doors for their dates. Elderly-daters haggle over who pays for the movie.

Although folks like Tony Bennett and Cher prove that we’ve all got a comeback in us, at our age every date severely tests that theory. Frequently, codger-daters turn to local dating services or the Internet in search of Mr. or Ms. Right.

My friend Doris has found a dozen dates through a senior dating service in St. Petersburg. The first was tighter than Jack Benny, insisting that she pay half the gas to go two miles to dinner. The second kept calling her “Cutie Pie” even over strident protests.

The third announced that he’d taken Viagra and was primed for a “night to remember.” 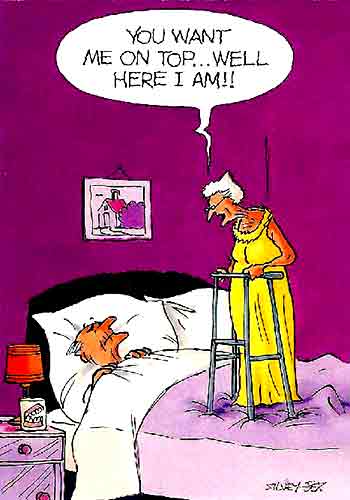 Although “getting lucky” may once again mean more than finding your car in Wal-Mart’s parking lot, respect must still be part of the game. Or so 70-ish Doris believes. She says the biggest problems with men of her generation are:

Still, Doris is game to keep looking, saying, “If God had meant me to live alone, I wouldn’t have dresses with buttons in the back.”

If we are to believe our e-mail spam, every person between the ages of 50 to 90 is now hooking up online with his or her dream date.

Just this morning, an e-mail dating service offered me a drop-dead gorgeous blonde saying, “I just joined. Wanna chat? ;-)” You know what she wants.

Another service says it has over 3-million active members “connecting.”

Under the subject line: “I have a crush on you,” the www.date.com site claims to have “5 Million Beautiful Singles and 1 Ugly One.”

No mystery which one you’ll get if you join.

Search “Senior Dating” on Google and you’ll find about 473,000 entries, most from services promising love, sex, riches, and the moon.

Yet senior women tell me that they’re lucky to find a man who can remember where he left his teeth.

“Men think they’re doing you such a favor by going out with you.” That is the universal feeling among re-dating women. “They all think they’re 10s and you’re a 2,” said one. “Men believe mature women need nothing more than a warm body who doesn’t miss the toilet too often.”

Women have higher expectations. Much higher.

“The chat rooms are dreadful,” she says. “Just a bunch of boring people with no agenda but to ‘hang out.‘”

One 59-year-old Suddenly Senior reader wrote, “I love younger men because most men my age have medical problems.” And she’s not yet 60.

For a man’s point of view on all this, I called five senior dating services asking to talk to men with successful experiences. None responded.

Reportedly, the following ran in the Atlanta Constitution (although it’s probably an urban legend):

SINGLE BLACK FEMALE seeks male companionship, ethnicity unimportant. I’m a very good-looking girl who LOVES to play. I love long walks in the woods, riding in your pickup truck, hunting, camping and fishing trips, cozy winter nights lying by the fire. Candlelight dinners will have me eating out of your hand. Rub me the right way and watch me respond. I’ll be at the front door when you get home from work, wearing only what nature gave me. Kiss me and I’m yours. Call (404) 875-6420 and ask for Daisy.

I’m told that 643 men called and found themselves talking to the Atlanta Humane Society about an 8-week old black Labrador retriever.

We men are so easy!