Geezer Test! Are You “Older Than Dirt?” (Butch Wax Optional) 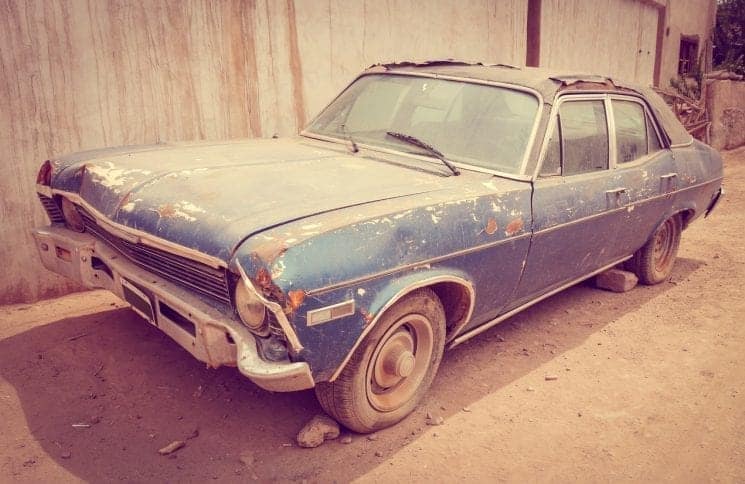 Think you got what it takes to pass our “Older than Dirt” quiz? Give your brain some exercise with these tough questions. Get your butch wax ready! What are you waiting for? Print out our geezer test and prove that you qualify for that senior citizen discount!

2. The bottle top of a Royal Crown Cola bottle has holes in it. For what was it used?

3. Why was having milk delivered a problem in northern winters?

a. Cows got cold and wouldn’t produce
b. Ice on highways forced delivery by dog sled
c. Milkmen left deliveries outside doors and milk would freeze, expanding and pushing up the cardboard bottle top.

4. What was the popular chewing gum named for a game of chance?

a. Blackjack
b. Gin
c. Craps

5. What method did women adapt to look as if they were wearing stockings when none was available due to rationing during W.W.II?

6. What postwar car turned automotive design on its ear when you couldn’t tell whether it was coming or going?

7. Which was a popular candy when you were a kid?

a. To stiffen hair cut into a flat top so it stood up
b. To make floors shiny and prevent scuffing
c. On the wheels of roller skates to prevent rust

9. Before inline skates, how did you keep your roller skates attached to your shoes?

a. With clamps, tightened by a skate key
b. Woven straps that crossed the foot
c. Long pieces of string or twine

10. As a kid, what was considered the best way to reach a decision?

a. Consider all the facts
b. Ask Mom
c. Eeny-meeny-miney-mo

11. What was the worst thing you could catch from the opposite sex?

a. SUV
b. Taxi
c. Streetcar

13. What was the name of Caroline Kennedy’s pet pony?

a. Part of the game of hide and seek
b. What you did when your mom called you in to do chores
c. Hiding under your desk, covering your head with your arms in an A-bomb drill

15. What was the name of the Indian Princess on the Howdy Doody show?

16. What did all really savvy students do when mimeographed tests were handed out in school?

a. Immediately sniffed the purple ink, as this was believed to get you “high”
b. Made paper airplanes to see who could sail theirs out the window
c. Wrote another pupils name on the top, to avoid failure

17. Why did your mom shop in stores that gave Green Stamps with purchases?

a. To keep you out of mischief licking the backs, which tasted like bubble gum
b. They could be put in special books and redeemed for various household items
c. They were given to the kids to be used as stick-on tattoos

a. Meatballs
b. Dames
c. Ammunition

19. What was the name of the group who made the song “The Gypsy” a hit in the US?

a. The Ink Spots
b. The Supremes
c. The Esquires

20. Who left his heart in San Francisco?

Get Our Suddenly Senior Trivia E-Book

1. b) On the floor, left of the clutch. Hand controls, popular in Europe, took till the ’60s to catch on.

2. b) To sprinkle clothes before ironing. Who had a steam iron?

5. b) Special makeup was applied followed by drawing a seam down the back of the leg with an eyebrow pencil.

9. a) With clamps, tightened by a skate key, which you wore on a shoestring around your neck.

14. c) Hiding under your desk, covering your head with your arms in an A-bomb drill.

15. a) Princess Summerfall Winterspring. She was another puppet.

*Barry Hollander, a sharp-eyed reader of Generations and The Senior Connection of Howard County MD, said that he remembers Princess Summerfall Winterspring as a real person. We checked it out and, sure enough, before the puppet, there was a live princess.

“Princess Summerfall Winterspring was portrayed by a young actress and was a lot less offensive than Thunderthud. Sadly, the young woman was killed in an automobile accident during one Doody season and her character was quietly dropped from the show. The following fall, however, they decided to reintroduce the Indian maid. Amid much fanfare and right on the air, in front of the peanut gallery, Buffalo Bob breathlessly introduced the new Princess Summerfall Winterspring! I was excited. Just think, a new Indian Princess and in my lifetime, too.”

“I had heard that she had been killed in a car crash, but I did not really understand at that age exactly what that meant. I was more than slightly taken aback when the camera panned across Doodyville and alighted upon – a puppet. ‘My God! she turned into a puppet!’, I thought. To this day, I wonder what they were thinking. Maybe they thought we wouldn’t notice. I did. I noticed right away.”

16. a) Immediately sniffed the purple ink to get “high.”

“For the record — The purple ink wasn’t exactly ink (more like a carbon paper released from a backing by the strong-smelling fluid) and wasn’t from a mimeograph machine — it was from a Ditto machine. The Ditto replaced the black-ink mimeograph for most teacher-produced worksheets during the ’50s and ’60s I believe. The mimeograph hung in there a while for printing longer runs of material usually to be distributed to all students in the school.”

***And reader, Mark Kornmann, suggested that two other answers would be appropriate:

b. Made paper airplanes to see who could sail theirs out the window

c. Wrote another pupil’ s name on the top, to avoid their failure

Mark noted, “This question previously appeared with “Mimeographed” instead of “ditto-mastered”. Mimeograph ink most often was black, & copies made via that process did not have the telltale “olic” chemical odor of the purple dittoes. Go to http://en.wikipedia.org/wiki/Mimeograph, then click on the ditto-master link down the page for the skinny.

17. b) Put in a special stamp book, they could be traded for household items at the Green Stamp store.

20. a) Tony Bennett and he sounds just as good today.

17 – 20 correct: You are not only older than dirt but obviously gifted with mind bloat. Now if you could only find your glasses.

12 – 16 correct: Not quite older than dirt yet, but your mind is definitely muddy.

0 – 11 correct: You are a sad excuse for a geezer. Redeem yourself by declaring to everyone that the world is going to hell in a handbasket.

We hope you had fun going down memory lane. If you enjoyed this short test, why not take our 1st Annual Older than Dirt Quiz? This was our very first quiz in the series and it’s one of our favorites.

If you’re looking for a bigger challenge, give our Impossible Quiz for Seniors a try. We also recommend printing our Movie Trivia to play on the next family game night.

Take a look at our complete collection of Best Senior Citizen Trivia.