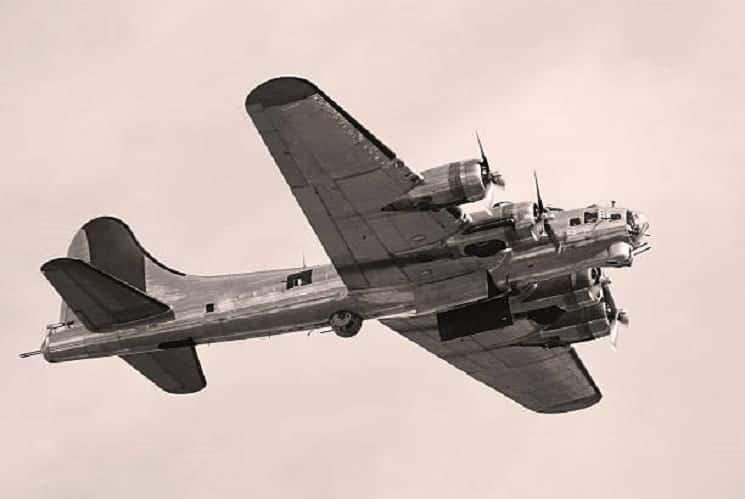 Exactly 60 years ago tonight – New Year’s Eve, 1944 – Lt. John McLaughlin was piloting a bomber called Andy’s Dandy’s in a group of 18 four-engine B-17s on a run over Germany.

Suddenly the sky went black with German fighters. McLaughlin estimated some 100 Messerschmitt 109s coming fast at 12 o’clock high. There were also at least three German jet fighters, among the first ever flown. All seemed to be firing directly at him. 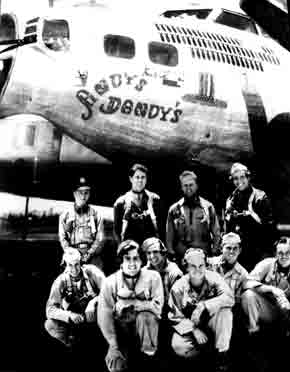 McLaughlin is second from left in back row

As he glanced over his left wing he saw a huge ball of fire, then nothing where buddies of his were flying just a moment before. Two other B-17s, both seriously shot up, actually piggybacked to earth where they crash landed, one on top the other, the crews immediately taken prisoner.

Other B-17s weren’t as lucky. As now 86-year-old McLaughlin remembers, pieces of planes were falling on him. An 88-mm shell shot through his plane’s floor taking his navigator’s head with it, exploding 30 feet above.

It was to be Andy’s Dandy’s only fatality.

Closer to Hamburg, the German fighters were replaced by heavy flak, anti-aircraft explosions “so thick you could walk across the sky on them,” McLaughlin later related.

Then, returning home after a successful bomb run, “bogies” attacked again. The big plane shook violently as every gun on the ship let loose – front, sides, bottom, top and tail, 13 .50-caliber machine guns in all.

It wasn’t called a Flying Fortress for nothing.

Andy’s Dandy’s now suffered over 100 holes “that you could put your fist through,” and the Germans showed no sign of relenting. Then out of the blue, three American P-51s pressed in from the west, driving off the Nazi fighters.

“If I had three million dollars,” McLaughlin says, smiling, “I’d have given those pilots a million each.” 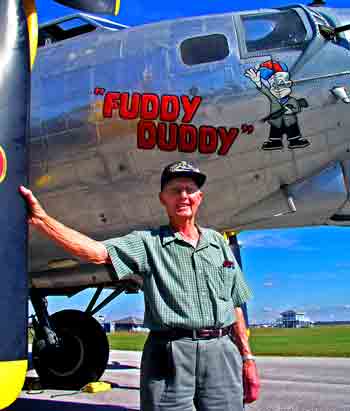 I met John recently when Carolyn and I joined him to fly with the crew of the B-17G Flying Fortress Fuddy Duddy out of Lakeland’s Sun ‘n Fun Airport. One of about a dozen of these big warbirds still flying, most who flew them consider the B-17 the best airplane ever built.

John McLaughlin (left) certainly agrees. He flew 35 missions over Germany with the “Bloody 100” Bomber Group. That’s 10 more than the famous Memphis Bell, 10 more than most everyone.

John got five Purple Hearts for various wounds, and the Distinguished Flying Cross for extraordinary heroism after losing two engines, throwing everything possible overboard and landing safely in Luxemburg under extremely dangerous conditions.

Walter Mitty and Me

It starts with a shudder, then a rumble. By the time all four 1,200-hp engines are straining to fly, it’s an announcement you haven’t heard in years.

The fully restored Fuddy Duddy brought out the Walter Mitty in me.

I’m flying over Berlin. Half the Luftwaffe is attacking my waist-gun position, wave after wave of Messerschmitts, Junkers, and Focke Wulfs coming at me from all directions, cannons blazing, as I shoot one, then another from the air.

“Chew gum!” the captain commands. “We’ll keep this plane together with chewing gum and prayer.”

“Let me take your picture,” Carolyn yells above the roar.

Heroics vanish. I turn and smile. I am so fortunate to fly in the plane that so many heroes flew. Both Generals Dwight D. Eisenhower and Douglas MacArthur used this very aircraft in the Pacific Theatre.

Many attribute our win over Germany primarily to the crews of the B-17s knocking out Nazi manufacturing capabilities.

John McLaughlin went on to fly many other bombers including B-29s over Korea. “But nothing had the intelligence and guts of the Flying Fortress,” he says fondly. “They’d shoot it all to pieces – one time I counted 167 large holes, each bigger than my hand – and the crew would have her flying the very next day. Sometimes day after day after day.”

John lives in Largo, Florida, now, with his wife of 58 years, Vivian. He made a living doing what he loved best until, at age 75, the insurance rates trumped profits at his Executive Charter Service out of Clearwater/St. Petersburg airport.

The day after our flight, I called to recheck some quotes. Vivian told me John wasn’t home. He was out passing his annual flight physical.

IF YOU LOVE WARBIRDS…

While you’re there, visit the famous Florida Air Museum. Open every day, all year long. See the collection of over 35 aircraft and thousands of historic one-of-a-kind artifacts. See home-built, factory-built, kit-built, ultra-lights, and helicopters. If you’ve seen “The Aviator” you’ll certainly enjoy the museum’s unique artifacts and never-before-seen memorabilia of aviation pioneer Howard Hughes’ during the 1930s and ’40s.