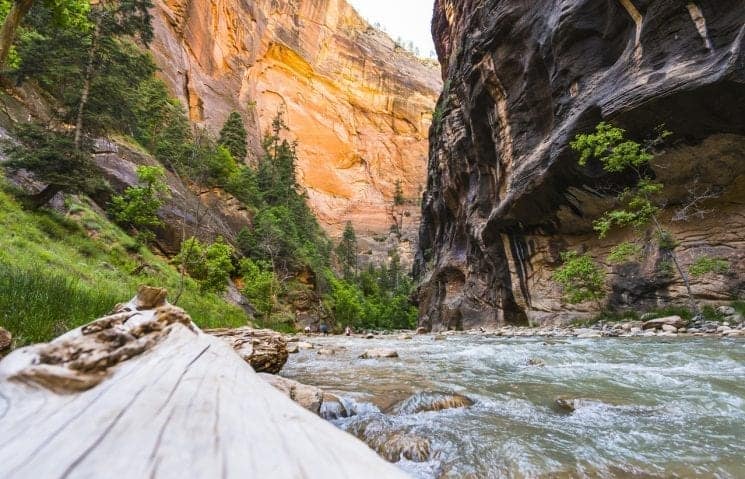 Advice and tips for seniors traveling to the Grand Canyon, Bryce Canyon, and Zion National Park. Learn how to safely travel with a group.

One Trip You Must Make Before You Die

Patricia Schultz’s 1,000 Places to See Before You Die isn’t for seniors, especially those of us now in our eighth decade. Regrettably, we haven’t the time, the energy, or the money.

But what if it were a more realistic Five Places…?

In our book, one of them would certainly be a tour of those three grand natural American cathedrals of northern Arizona and southern Utah: Grand Canyon, Bryce Canyon, and Zion Canyon. Each is a national treasure, unlike anything you’ve ever seen. Each leaves you whomperjawed. And each is more audacious, more stunningly beautiful than the others.

We know. For those of us who already have experienced the Grand Canyon, we wonder, “How can anything be more magnificent than that?”

Maybe it can’t. But the profound experience of these three natural wonders is beyond visual. It’s visceral, and their immense, majestic glory gets under your skin and into your heart, and never leaves.

But let’s start at the beginning.

Our eight-day, $995 Caravan Tour (see below) last fall of the Grand Canyon, Sedona, Lake Powell, Monument Valley, Bryce, and Zion began at Phoenix’s swank DoubleTree Suites. There we met our fellow travelers, guide and bus driver for our welcome briefing. (We had flown to Phoenix a couple of days earlier to get reacquainted with the city and friends living there.)

The next day we visited the Montezuma Castle cliff dwellings, with its 15,000 years of history, on our way to Sedona, the only disappointment of our trip.

We’d visited this popular area 25 years earlier. Maybe we’re more jaded this time around, but this still beautiful community set in the red rocks of northern Arizona has matured from an artists’ colony to an overpriced luxury destination of the rich and famous. 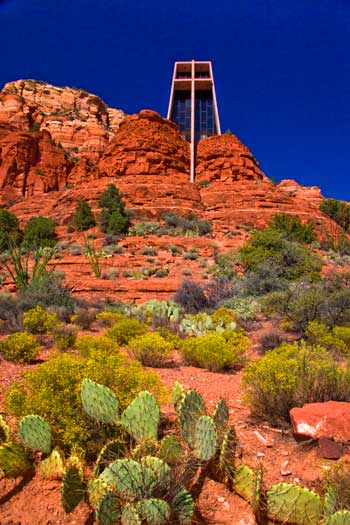 Chapel of the Holy Cross, Sedona

However, Carolyn and others swore they felt the reinvigorating energy vortexes for which the area is noted, making the experience unique and worthwhile.

Bushwhacked by God (Our Grand Canyon Trip for Seniors)

Everyone has his or her own Grand Canyon first impression. Most include utter surprise – like being bushwhacked by God.

You see, there’s nothing to prepare you for this magnificent six-million-year old hole in the ground. All you see, especially coming in from the south, is flat and dry. Even though the north rim of this massive rift in the Colorado Plateau is about 1,000 feet higher, the edge must be approached within mere yards before its overwhelming size and intricate and colorful landscape reveal themselves.

Suddenly, you’re looking down 7,000 feet through two billion years of history to the Colorado River below. And this vast chasm is at places 18 miles across!

If you’re fit, you may have time to descend to the bottom and back or do some serious hiking or bicycling. Maverick Helicopters provide incredible rim-to-rim views from $175. 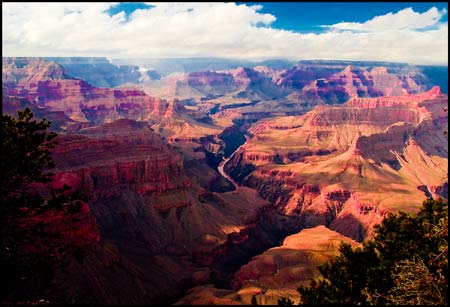 We took the free park bus, operating every 10 to 20 minutes, to various viewpoints along the south rim, photographing the ever-changing canyon face under the afternoon’s setting sun – and the next morning’s rising sun – capturing many facets of this glorious tribute to Mother Nature.

Nearly five million tourists visit Grand Canyon each year, most from their cars. A National Park Service ranger told me that the average stay is 15 minutes. What a shame! We’ve been there a half dozen times now, and the view is always different, always magnificent – always spiritual. 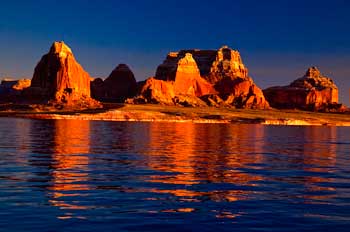 Late the next afternoon we enjoyed a scenic boat cruise gazing up at Lake Powell’s dramatically steep, glowing red sandstone walls just above the Glen Canyon Dam. We’re floating on 700-feet of water that provides the power that runs much of the West.

A short drive the next morning takes us to the Navajo Indian Nation and Monument Valley. This is John Wayne country. Filmmaker John Ford filmed 10 of his Westerns here with stars the likes of Henry Fonda, Jimmy Stewart, Maureen O’Hara, and of course, John Wayne. 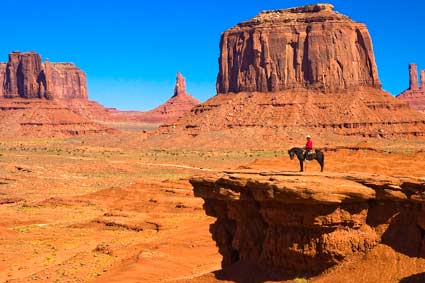 Still part of the Colorado Plateau, it’s a magical, pristine area of buttes and arches – sacred to the Navajos – that is seen best by a Caravan-provided Jeep on a 17-mile dirt road.

After a beautiful drive northwest through brilliant red, yellow, and pink fall foliage, Bryce Canyon at up to 9,100 feet elevation, turns out not to be a canyon at all, but a series of magnificent horseshoe-shaped amphitheaters carved from the eastern edge of the Paunsaugunt Plateau in southern Utah. 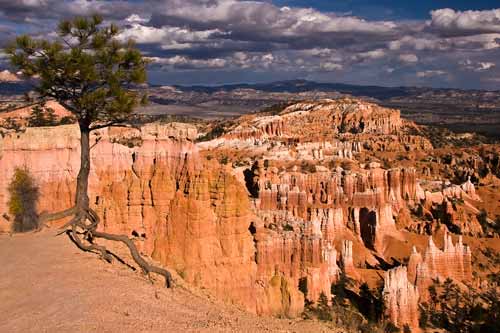 Ancient tree with hoodoos beyond

Known as “The Most Colorful Park in America,” Bryce is famous for its vertical towers called hoodoos.

Eerie, grotesque, and often whimsical, the stalagmite-like hoodoos, formed by water and ice, were believed by the Paiute Indians to be early residents turned to stone forever by a vengeful god for their evil deeds. Hiking and biking are the best ways around this spectacular place. It’s truly amazing, and we had plenty of time for the hoodoos to cast their spells.

Day Seven, after driving through several charming Mormon towns, we approached our third national park, Zion. Early Mormon settlers took one look at its 3,000-foot canyon walls, sculptured rocks, and monoliths, and declared it “the promised land” containing “the natural temples of God.”

Here, we looked up from the bottom of the canyon. Again, there was plenty of time to board free park shuttle buses to various points of interest for photography or hiking.

Wildflowers abound, as do game (including wild turkeys that seem to dare bus drivers to run them over), and, as we arrived during a rainstorm, waterfalls cascaded around us from sandstone cliffs.

Zion’s nickname, “The Land of Rainbow Canyons,” refers to a desert varnish – mineral residues leaving a wash of pinks, reds, purples, yellows, and oranges painting this park as colorful as the other two national parks.

A 45-minute ranger-led presentation and a comfortable, warm room at Zion Park Lodge was a perfect end to our invigorating last full day.

The following morning we drove to Las Vegas where most of us boarded planes to be home by supper; back to plan the other four places we need to see before we die.

IT’S TIME WE ACKNOWLEDGE OUR HOSTS

Our eight-day tour of the Grand Canyon, Sedona, Lake Powell, Monument Valley, Bryce, and Zion was the third Carolyn and I have taken with Caravan Tours. (Costa Rica and Nova Scotia the others.) At about $1,000 for each fully escorted eight to 11-day tour, this remarkable third-generation family-owned company out of Chicago truly gives better value per dollar than any tour company we know of.

Take accommodations. Each of our Caravan tours has pleasantly surprised us with the quality of the rooms and food. On this tour, for example, from the sumptuous DoubleTree Suites in Phoenix, the Radisson Resort in Sedona, to the Thunderbird right on Grand Canyon’s edge, there are no better accommodations to be had.

Caravan Tours is equally famous for its helpful, friendly and knowledgeable guides. They are the best informed we have encountered anywhere. They love their jobs, love Caravan (I’ve not met a guide yet who said they’d even consider working for someone else), and I guarantee yours will truly be a good friend by tour’s end. 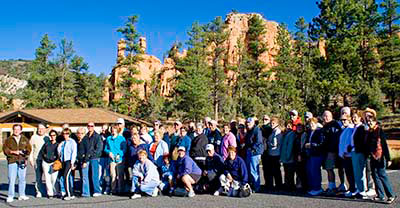 Yes, each tour has about 40 fellow travelers. It sounds like a lot, but it works. It helps keep the price low. And it provides a base large enough for everyone to find like-minded friends.