“Galveston, oh Galveston. I can hear your sea winds blowing…” as the words of Glen Campbell’s song goes… “on the beach where we used to roam.”

And the beach has been tied totally to Galveston’s history. You may not know this but Galveston is an island. It’s actually a barrier island, about 45 miles southeast of Houston, TX. 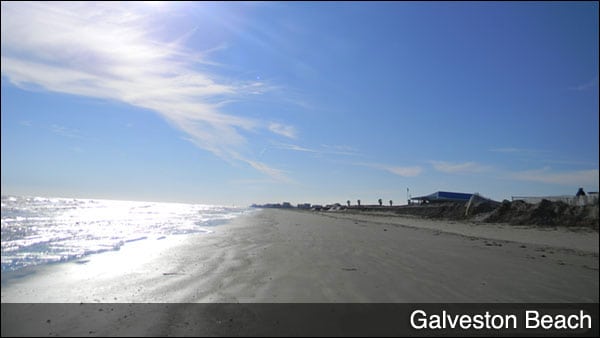 Galveston is part Southern, part Texas blooming with towering oleanders of every color. It has more history and stories than cities 20 times its size. Part of the charm of Galveston is that it is so much a town in its own right, and it always has been. Even today, many residents refer to the city as “The Republic of Galveston Island” because it is so unlike the rest of Texas.

In 1528, the Spanish explorer Cabeza de Vaca was shipwrecked on the Island. He lived among the Indians for several years as a medicine man and slave. In the late 1600s, the French explorer Robert Cavelier La Salle claimed this area for King Louis. However, the island was named for Bernardo de Galvez, a Spanish colonial governor, and general. Galvez sent Jose de Evia to chart the Gulf of Mexico from the Texas coast to New Orleans. On July 23, 1786, de Evia named the waters Galveston Bay. Later, the island and city took the same name. Bernardo de Galvez died the same year, never setting foot on his namesake island. 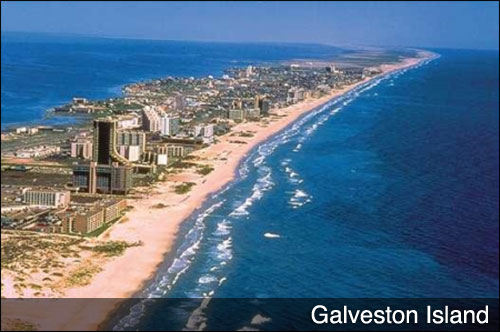 How can you resist the charm of this 32-mile island (only 2 miles wide at its widest) whose first known European settler was a pirate? The cultured and debonair pirate Jean Lafitte established the colony of Campeche on Galveston Island in 1817, numbering about 1,000 people at its peak. Lafitte was eventually forced to leave by the US Navy who didn’t appreciate his pirateering. As he was forced off the island, Lafitte burned his town behind him and literally sailed into history. No one knows what happened to him and if interested in learning more look into joining the Lafitte society. Many theories abound, including settling in Alton, IL and continuing his dynasty. Personally, I think a storm overtook him and sank his ship somewhere off the Yucatan Peninsula. 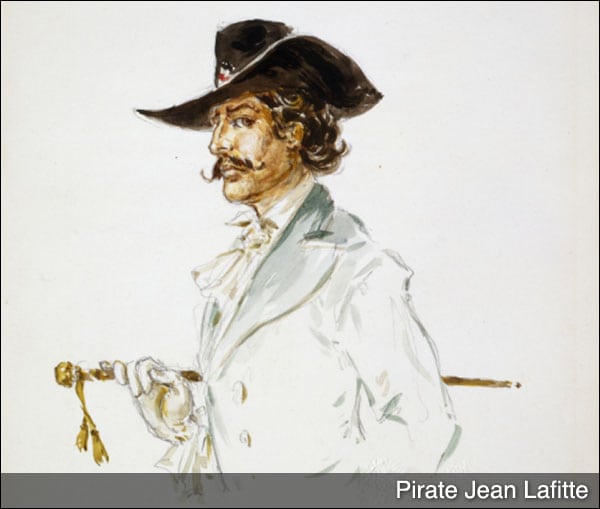 However, Galveston, as we know it, was officially founded by Michel Menard and Samuel May Williams, among others in the 1830s. The homes of these early island pioneers are still standing and tours are offered.

Everything is bigger in Texas and in the nineteenth century, everything in Texas was done first in Galveston. Incorporated in 1839, Galveston quickly became the most active port west of New Orleans and the largest city in the state. This exciting and sophisticated city built the state’s first post office, first opera house, first hospital, first golf course, first country club. The list goes on and on.

But everything changed on September 8, 1900. Back then hurricanes had no names but this one was so bad it was dubbed “The Great Storm.” Most estimates put the deaths at 6,000 and some say there were another 6,000 people who went missing. Over 1/3rd of the city’s population was wiped out by that tragedy. The problem was the next spring, 1901 the first gusher came in at Spindletop, not far from the island. But since the city was so devastated from the hurricane, the money went to Houston, since people deemed that area safer in hurricanes. Consequently, Galveston never again attained the glory it had before the hurricane.

Although devastated, the citizens were strong and rallied. They built a 16-foot seawall. It took 60 years to complete all 10.4 miles of it. Then the remaining structures were jacked up and sand pumped in raising the island 6-8 feet. But it was definitely worth the effort. In 1915 another hurricane with the same intensity as the Great Storm hit. 90% of the structures outside the seawall were destroyed but only 8 people died (and another 300 not behind the seawall).

In the 1920s, Galveston found a new source of income. There had always been prostitution and gambling due to all the sailors stationed there. With Prohibition, bootlegging was added to the list. Eventually, 2 brothers, the Maceo’s, took control. In the swinging ’40s & ’50s, the Balinese Room was legendary along the Gulf Coast. Some of the famous performers were Tony Bennett, Peggy Lee, Sophie Tucker, the Marx Brothers, Guy Lombardo, Harry James, Mel Torme, and so many others. Frank Sinatra sang there in 1950 (he was in decline at the time & didn’t get back on top until his role in From Here To Eternity got him an Oscar nod) and he asked for his meals to be included as part of his pay.

The Texas Rangers tried to raid the place several times, but a call was always placed to Maceo. By the time they walked the long pier, the gaming tables had been converted to backgammon and the slot machines folded into the walls. The chips were stashed in the kitchen and one suitcase full was inadvertently roasted in the oven once. One time the sheriff was asked why he didn’t close the place down. He replied, “Shucks, I am not a member so I can’t get in.” In the late 1950s, after the brothers died, someone in a boat under the pier saw the machines folded into the walls. After reporting this to the law, the Texas Rangers were able to close gambling down then. 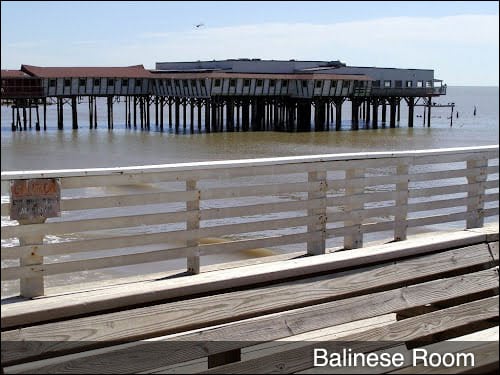 There are two historic hotels in Galveston. The Tremont House is down on the Strand. The owner, George Mitchell, brought Mardi Gras to the island in the 1980s and it continues as a big 10-day celebration to this day. The other hotel is the Hotel Galvez across from the seawall. Phil Harris married Alice Faye in 1940 and spent his honeymoon in the penthouse. And, Dan Rather gained national fame sitting in the Galvez reporting as Hurricane Carla came to Galveston in 1960. From this recognition, he got a news job reporting in the Kennedy White House and the rest they say is history.

The Galvez was known as the “Queen of the Gulf” on the day she opened in 1911. For nearly a century, this charming hotel built in a Spanish Mission style has been the choice for guests as diverse as Franklin Roosevelt and Howard Hughes, as well as the famous stars mentioned above. Palm trees line a stretch of grass in front of the property’s double doors. Mahogany beams cross the ceiling of the expansive lobby and down a long hallway known as the Loggia. The veranda (where Dan Rather reported from) overlooks the formal gardens and the hotel’s outdoor tropical pool. And, of course, the famed Balinese Room used to be right across the street. 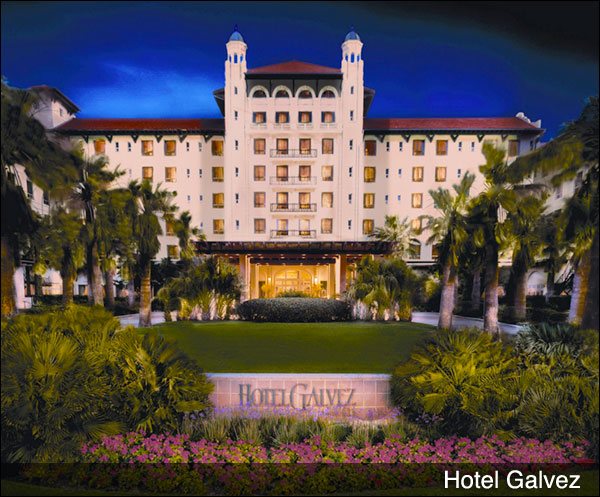 Currently, more than 2,000 buildings in town are listed on the National Register of Historic Places. The Strand, once known as the Wall Street of the Southwest, has dozens of Victorian Office Buildings with antique stores, art galleries, and gift shops. It’s a fun place to roam around and the cruise ship terminal is only a block away. Several ships now call Galveston home which has definitely stimulated the economy.

There are so many things to do on the island. There are several Victorian homes and churches you can tour. Climb aboard the tall sailing ship The Elissa, check out the Galveston Railroad Museum, or take in the movie, The Great Storm, at the Texas Seaport Museum. The downtown area (which many people don’t realize is there because they only go to the beaches and seawall area) is known as the Strand. It was once called “the Wall Street of the South” and has many wonderful Victorian buildings that have been converted into shops and restaurants and is a fun place to explore. This area is the heart of Mardi Gras in the spring as well as the Christmas festival, “Dickens on the Strand.”

Naturally, the biggest attraction is the sandy beaches. Besides that, you can gorge yourself on freshly caught seafood, especially shrimp, at a number of restaurants all over the island.

Tragedy struck once again September 13, 2008, as Hurricane Ike made landfall on the east end of Galveston Island. It left behind the damage of 100 mph winds and a storm surge estimated between 17 and 20 feet. Today the Island continues its journey of recovery and rediscovery since the hurricane.

I am not sure what it is about this island but it constantly calls to me, so I try and visit at least once a year. I used to live there a while back and maybe I will be able to again sometime. Hopefully, the sea breeze will call you to this wonderful romantic Victorian Island.