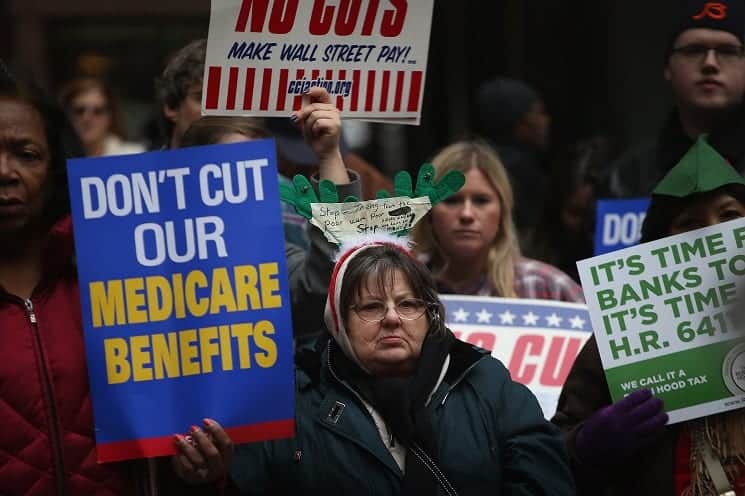 Take another look at the Senate’s 10-year healthcare reform, and ask…How about making $500 billion in Medicare cuts?

That’s what the House demands of seniors to help pay for its healthcare reform bill.

Either of these cuts billions more than last year’s entire Medicare budget: mammograms, surgeries, pots, pans and all. That’s how they intend to make the bill “revenue neutral,” a fancy term for stealing from Peter to pay Paul.

Instead of threatening the medical security of 44 million elderly Americans’ with a new, untested, and deeply politicized healthcare reform bill, let’s step back a minute.

Medicare’s not the problem here. It’s the solution.

Even seniors demanding, “Keep the government out of my Medicare!” support expanding the program to cover the rest of America. Recent polls indicate that 65 percent of American voters firmly support the idea of affordable Medicare for every American citizen, or “Medicare for All.”

$350 Billion Back in Our Pockets 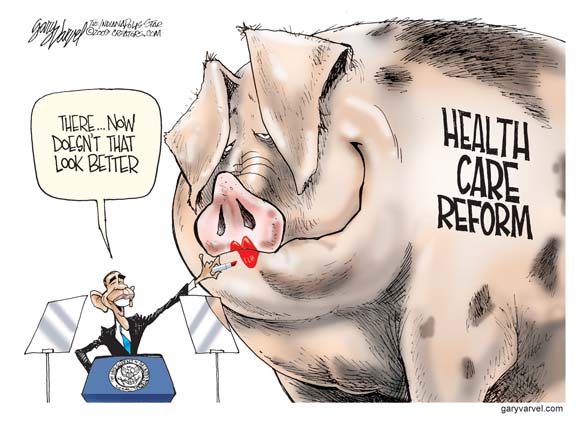 According to MedicareForAll.org, cutting current administrative costs alone, from doctors’ offices to insurance companies, leads to enhanced efficiencies that will save the country at least $350 billion annually — to provide excellent healthcare to all and then some.

According to the 2006 Medicare Trustees Report, Medicare’s administrative costs — administrative expenses divided by total expenditures — were only 1.8 percent. Compare that with the 20 – 30 percent health insurance companies now pay themselves for the same expenses.

Since we’re counting everything in 10-year increments, that’s $3.5 trillion in 10 years that can be spent on healthcare instead of service denials and extravagant insurance company salaries and bonuses. With Medicare for All, low administrative costs generate billions in savings — getting more, paying less and covering everyone. Brilliant!

The existing Medicare program provides a solid foundation upon which to build.

Rather than vote for a new 1,990-page, 19.6-pound House health overhaul bill, or the 2,074-page Senate bill (both already fraught with 10,000 cuts from those powerful special interests, insurance, and pharmaceuticals, doctors and hospitals), we could move right in with a simple bill, “Medicare for All. Affordable for all.”

No one kills grandma. No one’s pushed out to sea on an ice floe. Instead, each and every one of us get the benefit of what could in time become the most effective healthcare system in the world. (We’re now 37th; France is first, spending fully 1/3rd less than we do for far better care.)

There’s a long way to go. Medicare and its institutions can take us there without scores of interfering know-nothing insurance bean counters continually sabotaging our health, without anyone outside our doctors’ offices messing with us.

If only Congress took its lead from citizens, not corrupt insurance companies, we’d be out of this current legislative quagmire overnight. (Or, by law, force Congress to use the same insurance seniors get. Exclusively. Same results. Overnight.)

Back to the billions Congress wants to steal from our Medicare budget.

We already know how the plugging thing went.

Yes, hadn’t you heard? The House did vote to eliminate the donut hole. By expanding Part D drug benefits, the hole will shrink, but your kids will still be paying into that damnable pit until 2023.

That’s not encouraging for most of us old goats out here. I wonder, is it even possible to cut $500 billion without endangering all seniors?

Where would you even start?

Realistically, the first place Congress would cut is Medicare Advantage, a 2003 Republican token of appreciation for the deep pockets of the pharmaceutical companies at election time and throughout the year. That’s $170 billion.

So far, so good. But it’s not so easy after that.

Politicians brush off the $300 to $350 billion still needed, claiming we’ll get the rest from reducing Medicare “administrative costs and waste.”

“Don’t worry!” President Obama and his budget director, Peter Orszag, have told seniors, claiming that Medicare spending could be cut by as much as 30 percent without doing harm.

Know that the study they cite was restricted to patients who died — therefore getting fewer hospital days, doctors’ visits and imaging tests.

So who’s kidding whom? Gives new meaning to cash for clunkers.

Today Medicare pays doctors and other health professionals so minimally — Congress fears to enforce already overdue reductions of 21 percent — that in some parts of the country it’s becoming difficult to find medical professionals accepting the federal program for Americans turning 65. Such discrimination is already prevalent among Medicaid patients and destined to get far worse as more and more newly covered Americans chase a shortage of doctors. 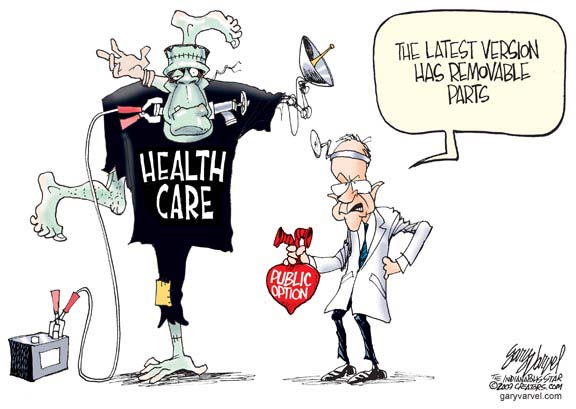 In all my bouts with Medicare-paid illness, these last two years I have yet to see significant “waste” in the system. Have you? Seriously?

Something called “Comparative Effectiveness Research” is said to enable savings of $300 billion in Medicare over 10 years simply comparing treatment and strategies to improve health outcomes. Promising! (They could eliminate paperwork.) But why have they waited till now? Surely, doctors have been comparing outcomes since Egypt ruled the world.

And from where exactly will this money be taken from in Medicare? Your mammogram? My cancer?

Don’t worry; eliminating Medicare fraud will fill any financial holes. Estimated now to total about $60 billion a year, Medicare fraud has become perhaps the most profitable crime in America. (According to 60 Minutes, in Miami the Medicare fraud business is now bigger than the drug business.) That’s $600 billion over 10 years. Stop the crime and you end up with $100 billion more than Congress wants to strip from Medicare, $100 billion to throw at the homeless or something.

Do you know the chances of that happening? These criminal laws have been on the books forever. Why should anything change now?

We can’t very well reduce Medicare’s mission. You and I will certainly be left out in the cold somewhere along the way. Boomers will never have a chance. Yet Congress insists that someone swallow this deadly pill.

Some say cutting Medicare does not necessarily mean reducing spending but rather slowing its rate of growth. But how do you do that on the cusp of millions of Boomers about to enter the system?

Time for Good Sense to Prevail

There’s still no final bill to vote on. We have time to change things, change our world for the better if you will.

Remember: You’re not your grandfather’s geezer. Together we can improve everyone’s’ healthcare big-time.

It’ll require effort. We can really change everything for the better if everyone reading this called or wrote (via US postal department is best) his or her congressperson and their senators insisting that we stop the wasteful monopolistic corporate socialism that is today’s health insurance business. We oldsters still remember a time when we loved our neighbors when equality ruled. Medicare for All now brings that equality to all Americans.

So — current bottom line — where will Congress find the billions to cut Medicare?

As Saul Friedman wrote recently in his weekly Newsday column, Gray Matters, “… for me, the most compelling argument for ‘Medicare for All’ is this: Unless the risk pool for Medicare grows and is strengthened to include millions of younger, healthier workers, their families, and their kids, Medicare as we know it could die of old age.”

Out of our sorry senior hides, that’s where. Unless we stop this thing now, demanding a fresh start on healthcare reform with a Medicare base. At least, starting at age 50 and growing from there.

It just makes sense. For us, and for our grandchildren.

P.S. You might want to start anew by recommending an already existing bill, H.R. 676. (www.thomas.gov) It is said that this bill doesn’t call for socialized medicine, but rather an expansion of the Medicare model to include all Americans, restoring benefits now existing under Medicare Advantage without the extra cost.