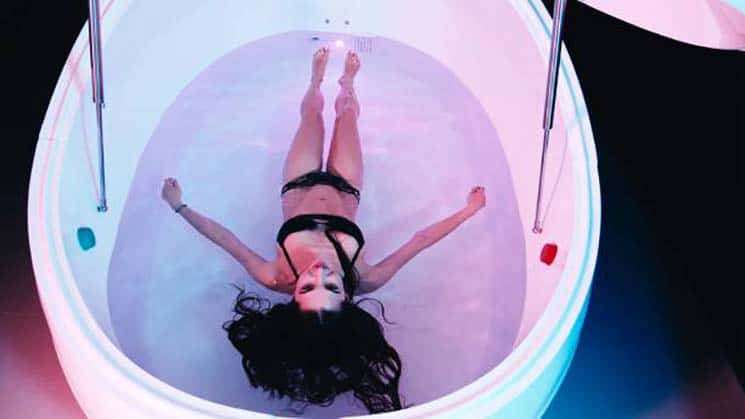 I clung to the needle-sized sliver of light. There was no other sensory input. My body floated in heavily salted water that was about three feet deep. I was totally submerged. Only my face from the eyebrows to below my lips was exposed. I was nude and the water temperature was the same as my blood so there was no sensation of touch, nor smell, nor sound, nor taste. This tiny bit of glowing on the wall beside me was a surprise. The cover on the sensory deprivation tank hadn’t shut completely.

I sat up and pulled the tank cover down tightly. When I lay back in the water, the darkness was complete. Immediately I felt claustrophobic – as if the roof was only a few inches above my face. I knew the tank was over six feet long, four feet wide and four or five feet high. It occurred to me that if my mind could fool me into believing it was inches from my face, it could also be made to believe it was much further away. Mentally, I pushed it out miles and I was never troubled with claustrophobia in a tank again.

Just a few months before, I had read John Lilly’s The Center of the Cyclone: An Autobiography of Inner Space. I was intrigued, to say the least, especially with the quote “In the province of the mind, what is believed to be true is true or becomes true, within certain limits to be found experientially and experimentally. These limits are further beliefs to be transcended. In the province of the mind, there are no limits.”

A physician and psychoanalyst, John Lilly was the leading authority in dolphin research. He invented the flotation tank and, along with the use of LSD, he experimented with pushing the envelope of reality as far as possible. He, Timothy Leary and Allen Ginsberg were psychedelic researchers into the nature of reality and the mind itself.

I met Dr. Lilly and his wife Toni when he was lecturing at UC Berkeley ca 1975. The subject was his book The Center of the Cyclone. When the conference was over, Toni and I talked for a long time. I mentioned I was a secretary. She said John was dictating a new book and wanted the tapes turned into written text. She gave me their phone number and address. So the next summer, I was in the Southern California Malibu Mountains transcribing his book. In return for my typing services, I was using one of several sensory deprivation tanks.

I still remember Dr. Lilly’s statement to me the first time I entered the tank. He opened the hatch and we looked in. “There is nothing there that you don’t bring in yourself.”

But why was I lying in the dark almost submerged in water? I’ve been asked that question for decades. It’s still a difficult one to answer over forty years later. Unlike Dr. Lilly and the others, I didn’t take LSD or any drugs. I was into Transcendental Meditation and in the 1970s sometimes I meditated several hours a day. An hour of tank time was supposed to be equivalent to about three hours of meditation. But, I also wanted to expand my consciousness and to learn about and explore the limits of the mind. Mostly, I wanted to become more self-aware — to know myself better. Inside the tank, there are no sensory distractions. There is only your mind. Outside, you can easily distract yourself from any negative thoughts.

Besides expanding my consciousness and becoming more aware, tank time gave me insight into the mind itself and its power. During one incident I had the feeling of floating across miles and miles of sky on a cloud. All because I shifted position in the tank and the waves caused me to float sideways three or four inches. Another one was more bizarre. At that time I had very long hair and one of those hairs coiled around my leg. It felt like a huge snake. I remembered Dr. Lilly’s words there was nothing in there that I didn’t bring in and I soon solved the mystery. Confronted with thoughts I couldn’t evade, using sensory deprivation I found new insights into myself and those led to even deeper discoveries — some of which I didn’t fully understand until decades later.

When I came out of the tank, I showered to remove the salt and went outside in the yard. John Lilly’s house was pretty high up in the Malibu Mountains. There were no neighbors at the time. Clothing was optional. As I approached the yard, there were several people meditating. Others were just walking around. No one spoke much. After being deprived of input, my senses were enhanced and they were enchanted by whatever struck them. I really listened to the birds singing. The range of their notes was incredible. What I remember most of all was the brilliant colors. Toni had planted flowers of many types around the edge of the yard. It was like a magical place. The reds, yellows, oranges, purples and even the green grass were incredibly bright. I couldn’t stop looking at them and it was easy to get lost in their color.

I worked for Dr. Lilly for five or six weeks before I had to return to San Jose. My daily schedule was the same. I typed in the morning and floated in isolation tanks in the afternoon. My longest single session was 3.5 hours but mostly I was in for about an hour and a half which is approximately the time it takes me to go through all five sleep stages including the REM cycle. I came out feeling relaxed and refreshed and hurriedly recorded my experiences and thoughts in my journal. In fact, I chalked up about 72 hours total between that summer and the next.

Oh! What John Lilly book was I transcribing? I don’t remember any specific passages but from his publication dates, I believe it was Communication Between Man and Dolphin. John Lilly himself was extremely intelligent but was mostly remote and aloof. Probably because I was a stranger. His wife, Toni, was a warm and compassionate person who was a lot of fun. I was invited several times to eat lunch with them. Usually, some of the other guests included Hollywood personalities. I was terribly shy in those days and I don’t remember uttering a word during the meals. I just sat there and soaked it all up.

John Lilly is quoted as saying “You don’t have to suffer continual chaos in order to grow.” I agree. Working for him and having the opportunity to use the sensory deprivation tanks was an exciting mind-expanding adventure. In the isolation tanks, my thoughts as well as my vision of who I am became clearer without all the sensory chatter.

Every decade had its highlights and events that made it special. I consider myself fortunate to have experienced life the 40s, 50s, and 60s. Those were my formative years and each of them holds memories I wouldn’t trade. Yet, for me, the 1970s were the first decade in technicolor. Sort of like Dorothy opening the door and stepping into Oz. It could be because TVs had gone from black and white to color, that we dressed in clothes of outrageous hues or perhaps it was the loosening of some of the more severe restrictions of previous decades.

The 1970s were an exciting time to be alive because there was the freedom and the incentive to explore our Inner Selves. Those early seventies were the beginning of my journey to self-awareness. My path took many side roads and one of them ran right through the California Malibu Mountains where I experienced sensory deprivation for the first time.

Barbara Barrett is an author and a published poet who is currently working on a book of her short stories and poems. She has written many nonfiction articles for blogs, websites, and fanzines on various subjects, including award-winning essays on author and poet Robert E. Howard. In tribute to his extraordinary ability to create images and moods, she published The Wordbook: An Index Guide to the Poetry of Robert E. Howard. “Exploring Inner Space” details her fascination with self-awareness, the limits of the mind and with Life itself.