How to Tell When We’re Senior

“The other day, I went to the vet and forgot the dog. I’m not making this up.“

I went to the corner store to get a paper and there was a really handsome young guy behind the counter, a cross between Harrison Ford and Brad Pitt. I couldn’t wait to get to the front of the line to talk to him but there was an old man with a walker in front of me, shuffling along, taking his time.

I started to get an attitude toward the old man for just being there. Didn’t he know I had a mission?

Just then the stereo in the store played “Wild Horses” by the Rolling Stones so I started singing along. The old man turned to me and said “Aahh … There’s nothing like the Stones first thing in the morning…”

Such a rude awakening to suddenly realize I had a much better chance with the old man leaning on his walker than I did with the young hunk leaning on the counter. This knowledge was a real ego blaster. I didn’t know I was old. I don’t feel old.

How do we know we’re getting “up there?” Do some kind of directional signals show us the way to the scary City of Seniorville? Should we prepare for the inevitable by going back to school and studying Deterioration 101? If there is such a course, would the entrance exam have questions like these: 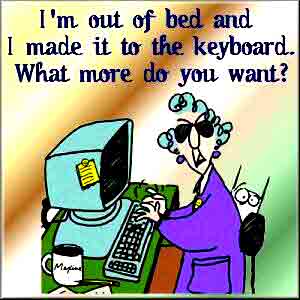 Based on my experience, it’s not any of the above.

It begins with the memory. Some days I can’t seem to remember a thing. Worse, it’s not like they say where you “can remember when you were a kid but you can’t remember what you had for breakfast this morning.”

It’s that I can ONLY remember what I had for breakfast this morning and not much before that. How dull is that?

It’s buying ten cheapo pairs of eyeglasses at the drugstore so you don’t panic if you lose one.

It’s resisting the temptation to point out to your kids that their favorite word, “cool,” was in use long before they were born. They think they invented it.

It’s using a yellow PostIt on your steering wheel reminding you to switch off the turn signal; old people never turn it off because they don’t hear the click click click.

It’s never saying, “When I was your age…”

It’s giving someone your old phone number by mistake and wondering why they aren’t calling you.

I tried jotting down important things, but that only lasted until I wrote a reminder of a 12 o’clock lunch date, but never showed up for it. I had accidentally thrown out the piece of paper the reminder was written on.

The other day, I went to the vet and forgot the dog. I’m not making this up.

However, there’s a positive side to a bad memory: I can’t remember my age, and yours will always be what it was when we met.

The lunch I had at Puka’s Pineapple Hot Dog Stand on Hollywood Boulevard is now recalled as a tour of the Hawaiian Islands.

There are no Cosby reruns; each episode is fresh and new and hilarious.

I’ve told my kids I spent 12 hours in labor with the first one. It was probably more like 2. My kids tell me if my memory worsens, that story will become one where I delivered the baby all by myself in a rice field somewhere in Asia.

And I can almost look forward to cataracts because then when I look into a mirror, I won’t be able to see the wrinkles.

This morning after spying that hunk I told you about earlier, I left my newspaper behind when I walked out of the store. I would have remembered to take it except I was totally thrown when that hunk behind the counter asked me if I needed help getting out to my car. How rude.

There are ways to plan for one’s financial security after reaching the age where you’re asked if you want help to the car. Several telemarketers have tried to sign me up for financial planning, but I always tell them I already have financial planning. If they ask what my Plan is, I tell them I went to my son’s house and said, “Which room will be mine?”

Commencing this year, I will have no more birthdays but celebrate instead The Unbirthday. That’s when you deduct a year instead of adding one on.

When I hit 30 for the second time, I hope I remember what to do.