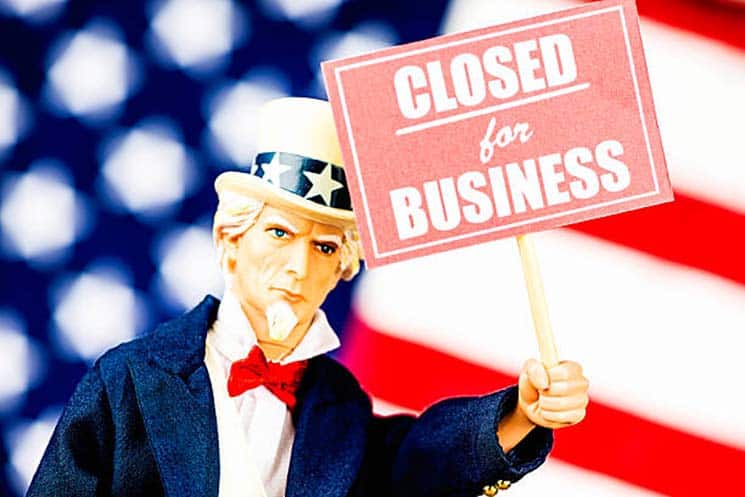 We’re into our first week of an alleged “Government Shutdown”. It’s all because of an alleged impasse over the building of a border wall between the U.S. and Mexico. Have any of you really felt it?

Sitting peacefully in my Florida home, I can’t find any difference in my life now from a week ago.

I doubt if many of the 800,000 non-essential government employees can tell much difference either. They’re supposedly one-quarter of the federal government payroll. They will still get the paychecks they have earned on January 6. It’s unlikely they will miss any paychecks in the future.

Congress will eventually pass a bill to pay all government employees for the days they did not work. It’s all due to the very same Congress not being able to get its job done in a timely fashion.

Government Shutdown: So who’s out?

That translates to “We will not miss a paycheck regardless of what happens to the rest of you.”

Congress will likely pass a measure to pay government employees the pay they miss while on shutdown furloughs. Its members may slide an earmark or two into the emergency bill that will pass without debate. You can bet those earmarks will silently sweeten the pot members of Congress feed. They have done it in the past. Most politicians come to Washington with not enough money to pay their rent. They then leave after a few years as millionaires.

The whole shutdown thing is a political sham. It does nothing but provides more fodder for the talking heads of so-called news organizations. They will chatter on endlessly with so-called government experts. It will be about nothing more substantial than how so many government employees exist from paycheck to paycheck. Or how they will suffer innumerable disasters if their pay is interrupted.

Do we, as seniors, have anything to complain about in this fiasco? Plenty. We are caught up in a mishmash of political intrigue over which we have little or no control.

We’re not going to be hurt by any slowdown or partial shutdown of the federal government. Our benefits, including our minuscule cost-of-living increase in our Social Security payments for the coming year, are fully funded and intact. Our checks will keep coming for another year regardless of what the politicians in Washington do.

Where we will suffer over the long run is from the political impasses. They’re nothing more than power struggles. They will continue to allow the federal government to spend endlessly and constantly devalue the dollars we have.

Our government employees and those we elect to represent us don’t have our interests at heart when considering the future. They are engaged in endless debates over who is going to be in charge. They have forgotten that politics is a system of compromising. It’s to ensure the broadest and best general welfare of the citizenry of the country.

Taking away of few park rangers or art museum guides for a few days is irrelevant. Paying government employees for work not done while politicians attempt to prove their point does nothing. It will exacerbate the growing distrust we have in our political and governmental organizations.