In addition to ever more savage hurricanes, rapacious developers, and arguably the most venal politicians on earth, Florida now claims the title, Python Capital of the Nation. As if we didn’t have enough problems down here. 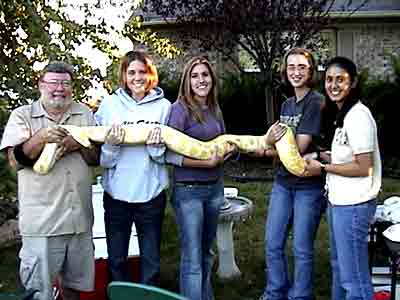 Ambitious, too. Just the other day, the Associate Press noted that a local 13-foot Burmese python exploded while trying to eat an alligator.

In fact, biologists with Florida Everglades National Park caught 95 of these telephone-pole thick reptiles just last year. That’s not counting two that got away to make their next meal turkey with a side order of Siamese cat.

Without martial law or predators, these new Floridians are multiplying like, well, like Burmese pythons, depositing and incubating up to 100 eggs at a time.

The AP reports that these giant snakes, like other non native varieties such as Michiganders, steal other critter’s homes, and prey on fragile native species, many presumably dying of cardiac arrest when confronted with what appears at first to be a crawling live oak tree bearing too many teeth.

More than 144,000 Burmese pythons were imported here in the past five years. One must wonder just who the hell is buying these things? And why?

Seems my fellow Floridians (I suspect snowbirds) get these legal imports as cheap, cute-as-pie, four-ounce hatchlings at local flea markets. Perhaps thinking a cuddly little serpent the perfect gift for a grandson’s Show & Tell project, grandpas all around the state inadvertently seed what could be the end of Florida as we know it.

The Charms of Madison County, Florida

Because just one year later, cute and cuddly is seven feet long and very, very hungry. Usually, the snake is let go into the wilds shortly after the family’s German shepherd disappears.

At two years old, our tiny hatchling is 10 feet long, and pretty much says and does whatever it pleases. Like most of Florida’s population, this outsider finds our weather appealing, the cost of living copacetic. The python settles down, raises a family, and enjoys barbecues out back all year long. 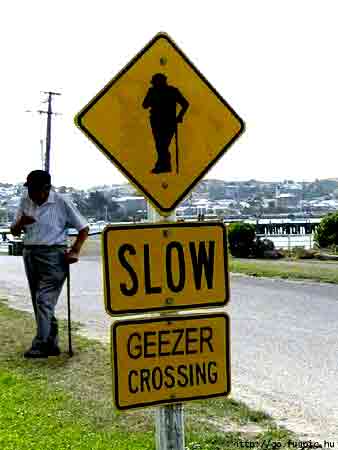 Not particular about diet, these pythons eat deer, monkeys, crocks, cats, and porcupines. (Presumably, even geezers. Reportedly, the brighter snakes hang out near our “Geezer Crossing” signs.)

Swallowed whole, their prey is digested as the python tans under the sun. What could be more Floridian than that? And, like most retirees here, in between meals these pythons prefer just to keep quiet and cool.

They give new meaning to the phrase “Early Bird Special,” and eventually grow to between 17 and 20 feet long.

We natives – that is anyone who’s been here longer than the outsider we’re talking about – really shouldn’t mind the pythons too much. Yes, they’re invaders. Just like the rest of us. Of course, with almost 400 sets of ribs, they’re creepy as all get out.

But let’s face it, Florida teems with exotic creatures that have no business living here. Experts say that the New Jersey exotics alone could be enough to debauch the state’s environment forever.

Our big problem: These pythons are uppity. Uninvited, but without a law against it, they stretch out across four-lane highways in the noonday sun, clogging traffic for miles around.

They’re found in fancy neighborhoods, often chasing Chihuahuas around Olympic-size pools, occasionally cornering a mutt in the airy atrium of a McMansion. Not a pretty picture, and very likely against the strict edicts of the homeowners’ association.

Just between us, though, I wouldn’t mind having a nice, friendly family of Burmese pythons for neighbors. Perhaps this year’s hurricanes will blow one in.

They keep the pests down, you know. And God knows, my retirement community has more than its share of pests.