Are you disgusted with Plan D yet? This week all across The Hill, Congressmen and women ponder the question: Which is more important, thousands of elderly constituents unable to get life-saving drugs guaranteed under Medicare’s Plan D or thousands of dollars in legal bribes from the pharmaceutical and insurance lobbies?

The conflict was inevitable.

Allow Big Pharma to write a 700-page bill that no one in Congress read before passing. Add Republican ideology to privatize Medicare, one of the most successful government programs ever. Mix with a blindly politicized Department of Health and Human Services, and you have a recipe for the most expensive government fiasco in this country’s history.

Result? Today while hundreds of thousands of low-income seniors now scramble for medicines they normally get without cost or question, and with some 20 states forced to declare health emergencies, Congress still doesn’t have a clue.

Plan D’s “free market solution” was supposed to be win-win for everyone.

Insurance and drug companies stood to get hundreds of billions in windfall profits. Congressional coffers overflowed with grateful “donations.” 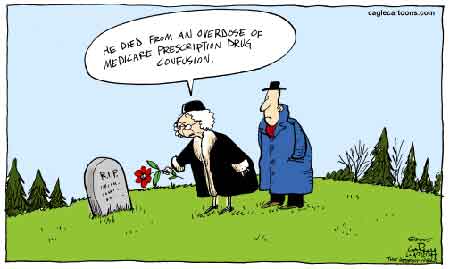 And seniors? We got “choice.”

Don’t hold your breath. Even if Congress is forced to revise Plan D, the result won’t be pretty. Picture lipstick on a pig.

Involved are simply too much money and too many unscrupulous Americans.

There is, however, Plan C.

From the US House of Representatives Committee on Government Reform, a report issued just last November concluded “the complicated Medicare drug benefit now being offered to seniors has not succeeded in reducing drug prices.” Instead, the drug prices offered by Part D drug plans are “over 60 percent higher than the prices available to consumers in Canada…almost 3 percent higher than the prices available at Costco.”

In other words, on average, you can save 60 percent or more buying your medicines in Canada than through Medicare’s new Plan D.

Remember, this is not me talking. This is the Congressional Committee on Government Reform.

Anyone who has been to the Suddenly Senior site knows that I have a dog in this fight. Canadian pharmacies, through their advertising, help pay almost all the outside costs involved in keeping the informative 1,400-page site viable and up-to-date. Without them, there would be no Suddenly Senior. I couldn’t afford it.

Nevertheless, I keep a wall between them and me. As longtime readers know, I am stubbornly honest.

Five years ago I wrote about my experience saving money buying medicine in Canada. That attracted Googlers looking for information about Canadian pharmacies. And that attracted the advertisers.

To this day, my wife and I buy our pharmaceuticals abroad, now from advertisers. I (and many Suddenly Senior readers) have found each to not only be a place of great savings but of folks who are helpful, kind, and caring.

So as your Congressman and senators ponder what to do about Plan D, I sincerely suggest that you do what saves you, and your country, big money.

Voting with your pocketbook may be the only vote you have that still counts.