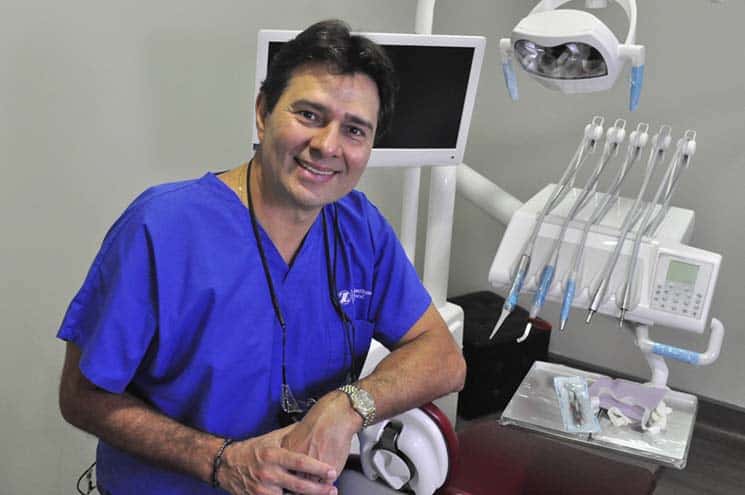 I was sitting in a plush leather operating chair in the office of a wealthy Florida dentist. His waiting room was filled with anxious patients. The reception was manned by three women working phones and billing.

How I Got Dental Implants in Costa Rica

In came the dentist, gray-haired, impeccably dressed, Gucci shoes and shirt, French tie matching his convertible Mercedes outside. He opened his hands wide, flashed a gold Rolex, gave a little bow, and with a hunter’s smile, asked “How can I help you?”

I didn’t know it yet, but he would set me off on a journey of thousands of miles that would bring me to rain forests and volcanoes.

I’ve been a globe-trotting foreign correspondent for decades. I’d lost a tooth here and a tooth there. I remembered a dentist in a Mexican village, pumping his foot up and down on an old sewing-machine-like treadle. He was powering a slow drill; cutting agonizingly into a now long-lost tooth. A molar had disappeared in Cairo to an Egyptian wearing a wine-red fez.

I realized now in Florida the years had taken their toll. I needed a lot of work.

For the next hour and a half, the US dentist took x-rays and went over all the work I needed. Finally, with the help of an assistant, he began tallying up the cost on a large calculator with big bright green numbers. The total came to an unbelievable $24,000.

My wife and I were aghast.

I said we’d think it over but could he please help me first with the pain in my tooth? It was the reason I’d come in the first place. Could I have a temporary filling so I wouldn’t be in pain all weekend?

He checked his Rolex, frowned and said sorry, there was no time. He wanted $24,000 up front; this job was too big for payments. And yet he wouldn’t take the time to stop my pain? I decided to look elsewhere; maybe a foreign country. I would use the magic of the internet.

I’d heard somewhere that dentists were very inexpensive and good in Costa Rica, modern Mexico, and South Africa. I had bad memories of Mexican dentists. South Africa was too far away. I’d try Costa Rica.

Using the Internet search engine Google, I put in the keywords, “implants and ‘Costa Rica’.”

In a one-sixth of a second search, the Internet revealed that: “cosmetic/restorative dentistry is a major industry in the small Central American country, that each year thousands of men and women visit San Jose, the capital, taking advantage of the low-cost, high-quality care provided by Costa Rica’s cosmetic surgeons and dentists, that more than 14 percent of all visitors to Costa Rica come there for some kind of medical care.”

Featured prominently was someone known as Dr. Mario Garita, a “world-renowned expert in implants’ and reconstructive dental surgery.” It said he was trained at the University of Miami. Sounded good, but was the Internet telling the truth?

I spoke to Garita on his cell phone. In perfect English, he told me to send my x-rays and he’d get back to me with a price.

Was he really as good as he said?

My tooth was still hurting. I went to a specialist in Fort Lauderdale who stopped the pain for one thousand dollars. He warned me not to go to Costa Rica, that I’d end up with a mouthful of bad work. He told me he’d check Garita out but never did.

I bought two affordable round-trip tickets on Taca Airlines from Miami to Costa Rica and set out with my wife into the unknown world of foreign dentistry.

Dr. Garita arranged for us to stay at the romantic Las Cumbres Inn; a magnificent villa on a mountain-side overlooking all of San Jose and two volcanoes. It was run by lovely German-born Elke Arends, who specializes in hosting recovering dental and plastic surgery patients who said, “Why stay in a regular hotel with other guests gawking at bandages when you can recover among other patients discussing their procedures and healing more quickly?”

Next morning Elke drove us down to San Jose and we entered a small security-barred and gated building on a busy street and climbed to the second floor.

There was only one girl at the desk and just one person in the waiting room, Walter Ferrari, an American from Texas. While I waited for Dr. Garita to arrive I questioned him carefully. His wife Daisy had been here before and had eleven implants at a ridiculously low price. He smiled and showed me his own movie star mouth shaped in San Jose and told me I’d just love Dr. Garita.

Garita was an implant specialist; his wife a cosmetic dentist, his father, a pioneer root canal specialist in Central America and a younger brother an orthodontist.

When he arrived, Dr. Garita flashed a dazzling smile to my wife and took us into his office. We sat under a wall of diplomas showing he’d indeed graduated from the University of Miami Medical Center at Jackson Memorial Hospital; specializing in implant surgery and oral reconstruction.

His operating room contained exactly the same modern tech expensive equipment used by the ‘Rolex watch’ dentist in Florida. Garita, after taking his own high tech digital x-rays began work on me right away.

He started by making impressions of what teeth I still had. Then went confidently through my mouth like a landscaper clearing a field. He removed my failing crowns and bridges and went after tooth decay. Then he put in temporary teeth. Dr. Garita was totally relaxed and supremely confident. We came to his office for three days in a row. Then he told us to take a holiday in Costa Rica and come back in three more days.

We hired a driver and van for $75 US per day who took us across the country 100 miles away on the adventurous road to Arenal Volcano. We sat back and relaxed as he dealt with winding mountain curves and soaring straight-aways past coffee plantations in the breath-taking countryside for which Costa Rica is famous.

On this rare day huge active Arenal volcano, which is usually covered by steam and clouds, could be clearly seen.

At its bottom was the famed Tabacon hot springs; twelve pools and several waterfalls, supplied by millions of gallons of rushing water heated by the volcano.

We joined hundreds of visitors from every country including the United States in rainforest-surrounded hot pools and waterfalls. As we soaked in the steaming waters, years of tension melted away.

We left at dusk and began the scary drive up to our hotel Arenal Lodge. Just getting there was an adventure. The road was partially paved and snaked almost straight up to the top of a mountain.

We were taken to a posh room straight out of an adventure movie in Africa. A manager arrived and gently cleared out a trapped hummingbird. Then we leaned over our balcony and marveled at the rainforest leading up to the high volcano spewing red lava a mile or so away.

We had a romantic dinner and annoyed a family of retired American dentists by telling them why we’d come to Costa Rica. But when we told them the price we were paying, they were amazed. They said the same work back home in Pennsylvania, would cost $40,000.

Next morning the volcano was completely covered by clouds. We breakfasted and watched in amazement as hotel workers placed fresh fruit on high stands for brightly colored birds. A large fur-covered raccoon-like animal came out of the jungle and begged for fruit, then ran off to hide and eat under the hotel. Later, emboldened, he climbed up the pole, scared off the birds, and ate in comfort.

We walked off on a nature tour and wound our way down the mountain path, which we had been warned to stay on because of poisonous snakes. Then we made our way to a screened building housing lush plants and hundreds of exotic butterflies.

We went horseback riding in the rainforest with other guests, ducking under trees and wearing ponchos to keep dry.

Too soon, our driver was there to take us on the return trip to San Jose.

In his office, Dr. Garita removed my temporary teeth and proudly brought in the newly-prepared crowns and bridges like a doctor holding a new-born baby. He set them one at a time inside my mouth. They fit perfectly and were much brighter than my old teeth.

The big moment came when Dr. Garita presented us with the agreed-upon bill for his services.

We’d had a wonderful vacation and I’d returned with a mouthful of great teeth.

The big test came when I visited my own local dentist. He told me up front that in the United States the molded teeth alone would cost more than the entire dental work and vacation in Costa Rica.

Then I opened wide and got his verdict.

“This is the most magnificent dental work I have ever seen,” he declared.

I left smiling brightly and feeling very clever. I had to get home right away and brush my teeth.

You can contact Dr. Garita and ask for a quote and free consultation if you would like to learn more.